1. Remember that water belongs to the land (Inland waters).

2. What is the relationship between rivers and the relief?

River. In Africa many rivers. Their distribution on the mainland, and power depend on the climate regime. In the areas of equatorial climate due to the rainy river flowing Year-round, and in subekvatorialnyh zones - only in summer. In dry areas tropical climate there is almost no rivers. They formed internal flow area - An area which has over river connection with the World Ocean. A few rivers that flow into the closed area lake or lost in the sands - the big dry and water evaporation impregnating her in sedimentary rocks. They remain the only dry river bed - Wadi (See fig.). They are filled with water once a several years during the rare rains. Most of the rivers belong to Africa basins of the Atlantic and Indian Oceans.

Nile - Is the longest river not only Africa but the world (6671 km). Once he was a mystery to the ancient Egyptians. They could not understand as of waterless desert, where there are no rains and a lot of water evaporates, can outflow rivers. Neil, to the surprise and delight Africans rozlyvavsya middle of summer when the heat was greatest. They attributed this interference supernatural forces and adored river. Could unravel the mystery in the XVIIIth., investigating its origins. It turned out that the origins of the Nile is River Kagera, which  begins in the equatorial belt of East African plateau and which is replenished daily rains. It carries its waters into Lake Victoria, and coming from it gets a name White Nile. In the upper reaches it has rapids and waterfalls falling from steep ledges. Mastered plateau, the river is flowing well on a flat plain and forms a huge marshes, which stretch for hundreds of kilometers. Filled with summer rain subekvatorialnoho zone, the river carries its waters farther north. On the Edge tropical zone in the White Nile flows into the main tributary - Blue NileWhich almost doubles the amount of water. After their merger Nile river get the name. Further north, entering into possession of the Sahara, in period of 3000 miles almost to the mouth it does not take any great tributaries. Nile pours into the Mediterranean Sea creating large delta the size of our peninsula.

Neil - the only African river that crosses the Sahara and is source of life in the desert without water. Its valley - the largest oasis that strip stretches along the coast. From time immemorial the Nile water used for irrigation fields. This built on some sections of dikes and canals existed for thousands of years. Creating today Aswan  dam would increase the area irrigated land, improved the navigation, and built power supplies electricity.

Congo (Or Zaire) - Naypovnovodnisha  and the second longest river in Africa. It describes a huge arc current and double crosses the equator, where a large amount of precipitation falls. Therefore, the river flowing throughout the year. Numerous tributaries, which collect water from an area of India make strong Congo. On his long journey to the Atlantic river gaining such strength that each second pours into the ocean about 42 tons of water. Of them fresh sea water is tens of kilometers from the mouth, and a powerful current noticeable in the ocean. This is second only to Amazon Congo. It Cascade flow plateau, where performances of solid crystalline rocks form numerous rapids and waterfalls.

Niger arc bends north pidstupayuchy to the Sahara. In upper and lower reaches she stepped in the mouth forms a large delta with sediment. Flowing at a considerable section of arid areas, the river is of great value for irrigation. River Orange rises in the Drakensberg mountains and flows into the Atlantic Ocean. The upper and middle stream it forms waterfalls and mountain has tremendous character, and at the bottom - flat calm. Crossing the desert region of tropical climate, the river is often little or milli dry.

Zambezi - The largest rivers in Africa, which flow into the Indian Ocean. In summer, the rainy season, the river is lost in large swamps broad valley. In the upper reaches it overcomes many rapids. On the Zambezi is one of the world's largest waterfalls - Victoria. 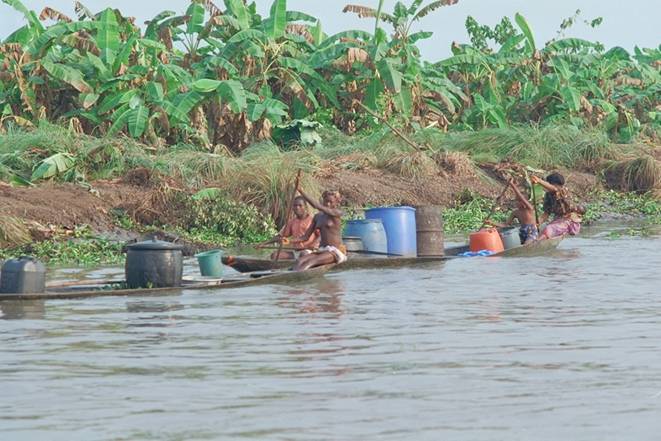 Fig. Travel waters of the Niger

In 1855 David Livingston "Discovered" the largest waterfall in Africa and gave him the name of the Queen of England Victoria. Meanwhile, Africans called it: Mosiah oa-Tunya-  – Smoke that thunders. Approaching ledge, majestic Zambezi looks calm. But then it flow of 1 600 meters wide suddenly rushes down the stone ledge height of 120 m. Clouds of small spray that rise up to 500 m, denote the place inadvertently falling river. Water roars in anger and tends to narrow rocky gorges. "I was sure we The first Europeans who passed on the Zambezi. I have given the English name of the waterfall, making it only once "- Livingston wrote in his diary.

LAKE. Most of the lakes, especially large, focused on East Africa. Their valleys are located in narrow elongated cavities in the zone East African faults. These lakes have steep banks and large depth. Deepest in Africa and the second depth in the world after Lake Baikal is lake Tanganyika (1435 m). With a width of 60 km, it stretches for 650 km! Lake sewage, so it is fresh water. It has a unique organic world and exceptionally rich in fish. The lake around 250 species, most of which - and nowhere else. Lake Malawi also has elongated and tectonic origin. However Tanhanyitsi yield by area and depth. Lake of fresh and rich in fish.

Lake Victoria like the sea. It is the largest lake in Africa and one of the largest area in the world. The lake was formed not in the faults in the trough and platform. So relatively shallow lake (80 m) and has low-lying coasts, strongly dissected bays and peninsulas. Lake implanted numerous islands. Hurricane winds, which often accompany thunderstorms, causing severe storms on the lake.

The oldest lake in Africa is Lake ChadWhich lies on South of the Sahara in a vast flat basin. It is a remnant of the ancient lake that existed in past geological epochs. Shallow lake (7 meters). In dry season, the area is reduced by half, and in rainy again increases. Shores low-lying, marshy in many places covered with thickets of reeds and papyrus.

Role of lakes in the lives large. Very important for Africa their transport role, because the river is "locked" numerous rapids. Lake rich in fish and fisheries are sources.

Groundwater. Large reserves of underground water concentrated, surprisingly, when the Sahara and the Sudan plains. Aquifer occurring at depths of 20 to 2 000 m. Their value for population of fresh water in these arid areas where almost no rivers and lakes very large. For the extraction of water from the earth drill artesian wells. In areas where groundwater outcrop as source or where they located close to the surface, there oases- Desert areas of natural and cultural vegetation. 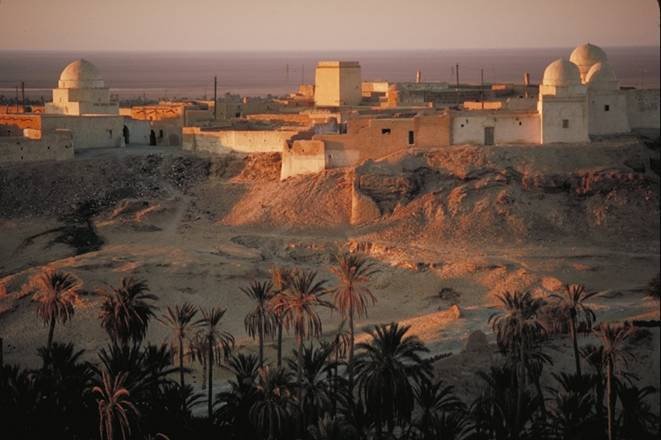 1. What natural factors affect the location and mode rivers?

2. Identify the geographic location of the river Congo. Search on the map where it forms waterfalls. In honor of whom they are named?

3. Name the characteristics of the rivers of Africa.

4. What relationship is there between relief and rivers of Africa?

5. What African lake formed in the area of East African faults? What features of their depression?

6. Why is Lake Chad area and change its shape?

7. Using the card, bring that Lake Tanganyika Victoria, Nyasa nourish the largest river of the continent.

The geographical position of Africa, the prevalence of flat terrain and uneven distribution of rainfall determine the vivid display of pulse zone. Like climatic zones, natural areas are located almost symmetrically with respect to the equator and is clearly repeated in the northern and southern parts of the continent.

Thus, at the equator have a wet equatorial zone forest area that changes  subekvatorialnyh variable-humid forests, which gradually turns into savannahs, and those - in tropical and semi desert. At the extreme north and south mainland have tverdolysti subtropical forests and shrubs. 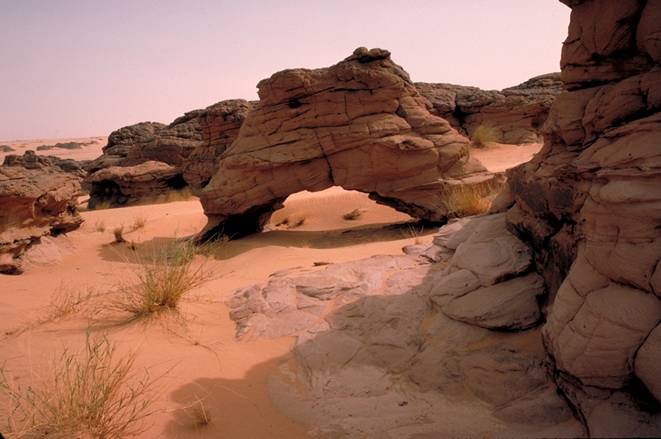 Fig. In the desert in eastern Morocco