1. Remember, you must reach equatorial zone.

2. What features of the equatorial climate?

3. Which plants and animals are called endemic?

LOCATION And climatic conditions. Wet Area evergreenequatorial forests located on both sides of the equator in the Congo Basin and Gulf of Guinea coast. Its formation is caused by constantly equatorial always hot and humid climate.

Day in the equatorial forest usually starts fine morning. By the afternoon sun makes it heated the Earth's surface. Heated from her air saturated with moisture, afternoon rises up and forms a dense clouds. Afternoon with clouds that zhustylysya to blackness, rain falls to the ground, accompanied the storm. Lightning in a rage divide the sky. With the onset of weatherproof wood rozhytuyutsya furiously, as if in fear want off the place. However, strong roots keeps them strong stems. After a few minutes if the water putting out the storm. And when the rain ends, the forest is again quietly and majestically. Evening comes again quiet and overcast.

SOILS. Under equatorial forests formed red-yellow feralitni soils.The name "feralitni" comes from the words ferum – iron and litos – stone. In dense forest land is littered with fallen leaves. Under hot and humid climate it perehnyvaye quickly. It would seem that all are created fertile conditions for soils. However, it is not. Organic substances that are produced in large quantities, in the soil almost piled. The reason is that the thick roots many plants, located next to the surface quickly absorbs nutrients substance. The residue of organic matter daily abundant rains washed away, submitted in the lower horizons. In the upper horizons remain insoluble iron and aluminum, which provide soil and bright reddish-yellow coloring.

Iron from the soil

Red-yellow feralitni soils can form a continuous solid surface crust. Contents iron in it can reach 25%. Under such conditions the soil can be used as iron ore. 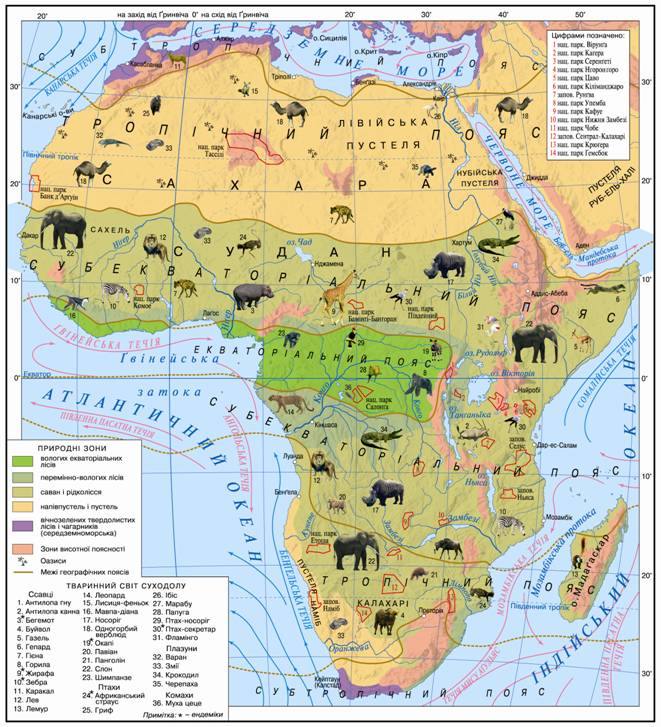 Translation:. Sufficient amount of heat and moisture causes the development of lush vegetation. African humid equatorial forest affects species richness and density of plants. And some only trees there are more than 3 thousand species. In the struggle for light, they growing up in 4-5 layers. Form the upper tier high fikusy and palm trees that reach 70 m. Many trees are more powerful doskopodibni root-prop - grow strong, providing stability. In the giant trees of leaves and tough dense, often with a shiny surface. Yes they are protected from the scorching rays sun beats rain and streams during rains.

In the lower tiers tinevytryvali growing shrubs threaded ferns, coffee trees, bananas. Giant lianas thick with hand surrounded by trees, get out of it up, thrown from the crown to crown, fall down to earth again creeping up on another trunk. Their intricate plexus make impassable thickets of the forests. High up on trunks, branches and foliage of trees located even hordes of plant-parasites that suck nutrients from other plants. Mostly these orchids, trying numerous aerial roots reach the ground. They are able to absorb moisture directly from the air.

Leaves large and small, narrow and wide, bright and dark green covers all the cracks and gaps in the dome of the forest. It falls not all immediately, and in turn, leaf by leaf. Therefore, the forest always green. Plants in it grow, flower, fruit and simultaneously throughout the year. Through dense crown barely penetrated the sun, so even in the woods day rule dusk. Forest thicket Wrapped undefined. Raw air hard breathe. Man in the equatorial forest feels like the bottom of sea green. 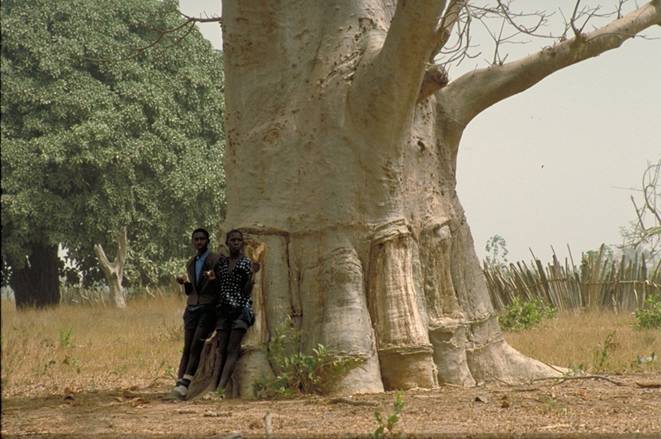 Fig. In the arms of baobab 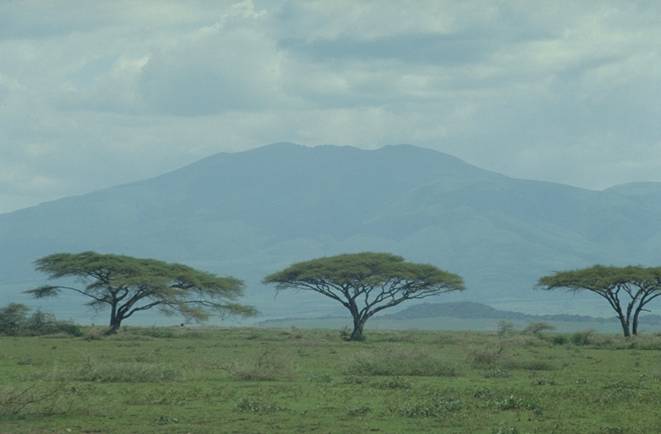 Fig. Akatsiyi in the foothills of Kilimanjaro

ANIMAL WORLD. Animals in the equatorial forest live mainly in trees. In birds, rodents and insects, there are food and shelter different monkey: Martyshko, baboon, chimpanzee. In inaccessible areas live humanoid gorilla. Monkeys feed on fruit trees, young leaves and arrange in nests of the branch broken branches. Help them get about lianas, some of the species are called "Monkey ladder. The biggest predator of the forest - Leopard pidsterihayuchy prey, also hiding in the crowns of trees.

Ground residents equatorial forest smaller than open spaces, because it is difficult to move large animals in the dense woodlands. In the undergrowth almost no grass, so there is no animals that eat it. But many that eat the leaves of trees and shrubs: African olenok, kytytsevuhi pig Okapi - relative  giraffe. Rivers inhabited with crocodiles, and on their shores - dwarf hippopotamuses that are among of the rarest animals on Earth. 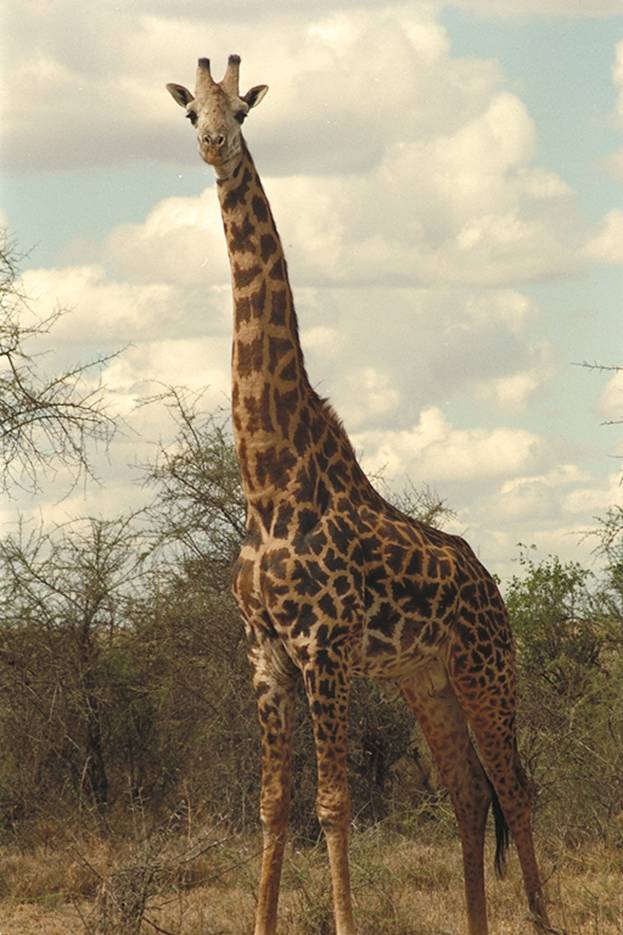 All tiers of the forest inhabited by various birds. Among them many parrots. Bird-rhino has big and thick beak for picking fruit.

Snakes, most of them poisonous, and live in trees. Green body makes them look like creepers and allows skillfully camouflage among the leaves. One of the most dangerous snakes in the world believe arboreal cobras - Mambo. She is aggressive and very poisonous. Its strong poison affects the nervous system and in a few minutes person loses consciousness and dies.

In all layers of the forest variety of common insects. Many large whales. In the equatorial forests of the hardest lives on the planet insect - beetle Goliath. It weighs 100 grams, but despite this, can fly. Some types of ants moving long columns, eating everything alive on its way. It is dangerous tsetse fly, which carries the causative agent of disease that causes death in domestic animals and sleeping sickness in humans. 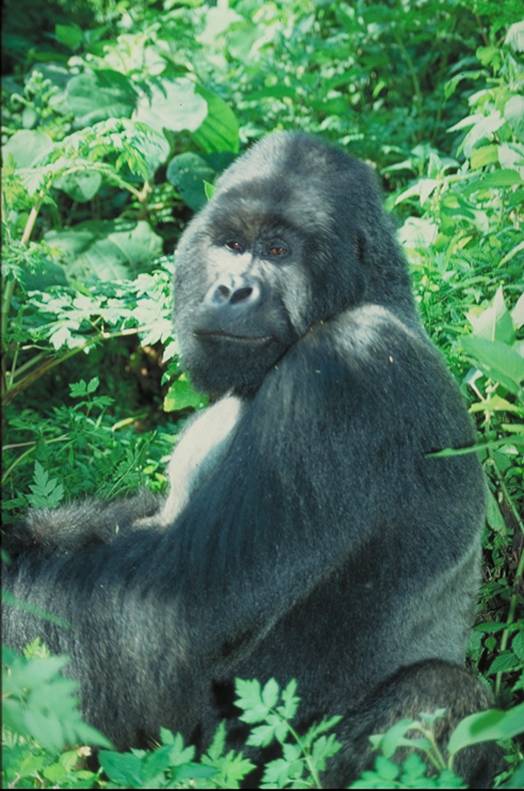 VALUE Rainforest. Equator forests are of great economic value. They have trees that are valuable (strong and beautiful) wood - black (ebon), red sandalwood. Since it made dear furniture. Coffee was the founder of the coffee culture. Oil palm gives food technical and palm oil. Bamboo is used for cooking wine. From the leaves, bark and fruits of many plants produce medicines.

However, in the nature of equatorial forests have vseplanetne value. Plants absorb moist forest huge amounts of carbon dioxide and emit oxygen in Earth's atmosphere. Therefore they are called the main source oxygen, lungs planet. Unfortunately, the forests were cut down decades in the field and plantations for timber. Following the uncut trees disappear and animals.

2. Where is the wet zone rainforest?

3. Under the influence that natural soil forming factors of rainforest?

4. As plants adapted to life in the dense humid equatorial forest?

6. What animals are common in equatorial forest?