1. Remember that this endemic.

2. Within that geographic Australia zones located?

ORGANIC WORLD. Plants Animals Australia not different species richness. However, they are extremely original: 75% plant and 90% of animals found only there. Originality organic world of the mainland because, separated by oceans rest of the world millions of years it has developed in isolation. Nature seems transformed Australia on a huge reserve, where there were species that elsewhere found (endemic) And where preserved those that existed in past geological epochs (reliquiae). 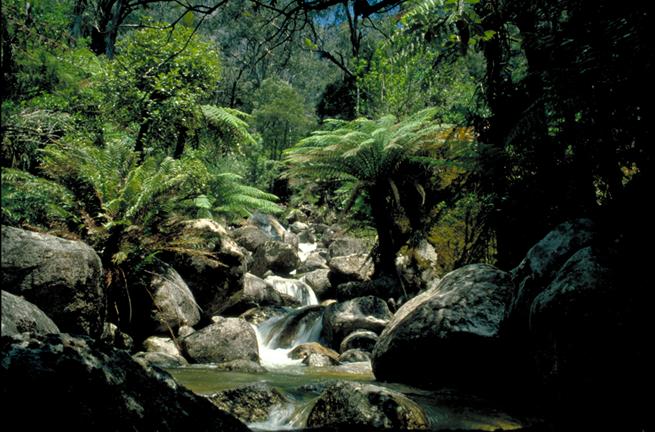 Plants Australia is unique. Australian plant is the symbol of eucalyptus - a tree, spread everywhere: from humid forests to dry deserts and mountain peaks. They consist of hundreds of species, including dwarf and Giants height of over 100 m. In humid climates the roots of eucalyptus so powerfully suck out moisture from the soil, then it evaporated through the leaves that he had received called "tree-pump. Often they are planted for draining wetlands. Eucalyptus and well adapted to arid climate: their leaves back edge of the sun, which reduces evaporation. It almost makes krone shadows eucalyptus forests is surprisingly light. Typical trees are acacia and that are so Also there are many kinds. Endemic casuarina are declining down filamentary aphyllous branches. Bright green crown tree ferns up to 20 m height.

Animals svoyeridnishi for more plants. Endemic among them - 90%. At any mainland do not occur in such of marsupials - kangaroos, koalas, Wombat, Tasmanian Devil, marsupials protein, marsupial mole, mouse and other marsupials. Marsupials belong to most primitive mammals. They are unusual because birth to cubs tiny and helpless. Mom donoshuyut skin fold test them in the abdomen that like a bag.

Kangaroo is a "national animal," he shown to the public emblem of Australia. Among them is a dwarf kangaroo, wallabies height of 30 cm and 2-meter giant red kangaroo. They are great runners, rather jumpers. It serves short front and long hind legs and a long hard tail. The length of the jumps is a 9 pm Some kangaroos live in the woods, others prefer prefer open spaces, tree species are able to climb trees. Marsupial koala - eucalyptic forest dweller. He lives in the trees and leads night sedentary lifestyle. This is pretty animalcule thick soft fur that makes it look like a teddy bear. Cumchastyy wolf and tasmaniyskyydevil - a very rare animal.

Only in Australia are found echidna and platypus - animals that lay eggs like birds, and suckle young with milk, as mammals. Echidna reminiscent of the hedgehog 8 inch needles, but contrast, has a long beak, which eats ants. A platypus unusual that the speciesayetsya collected from different parts of the animal: body, as in puppy; membrane between toes and beak like a duck, a tail like a beaver. On Tragically, hind legs have spurs, like a rooster. Platypus swims well, looking for worms and snails beak in reservoirs. He lives in deep burrows, organizing input close. Squeezing it, wring out water from animal coats and connector gets almost dry. The only large carnivorous Australian mainland is a wild dog branding - a descendant of poultry grown wild dog that was brought even in ancient times in Asia. Branding live and hunt in packs marsupial. Sometimes they attack and domestic animals, so they chase the farmers.

Different and the same sort of Australian birds. A lot of parrots: from the known to all small undulate motor scooter to large cockatoo. The forests are led lyrebird tail which resembles music lyre instrument. Ctraus emu slightly smaller than African (Fig.). He also shown on the arms of Australia. Smaller than the ostrich, as is the flightless bird cassowary. Many Paradise BirdsHaving a nice bright colors, and garbage chickens. In reservoirs sublime live black Swans.

In Australia, many lizards and snakes. In coastal waters encounter crocodiles, sea snakes, sharks, skate shypohvostyy, medusa "sea wasp", a meeting with which is extremely dangerous. Amazing fish tseratod, whose ancestors were living in the Mesozoic era dvoyakodyhayucha: it hasgills and a lung. 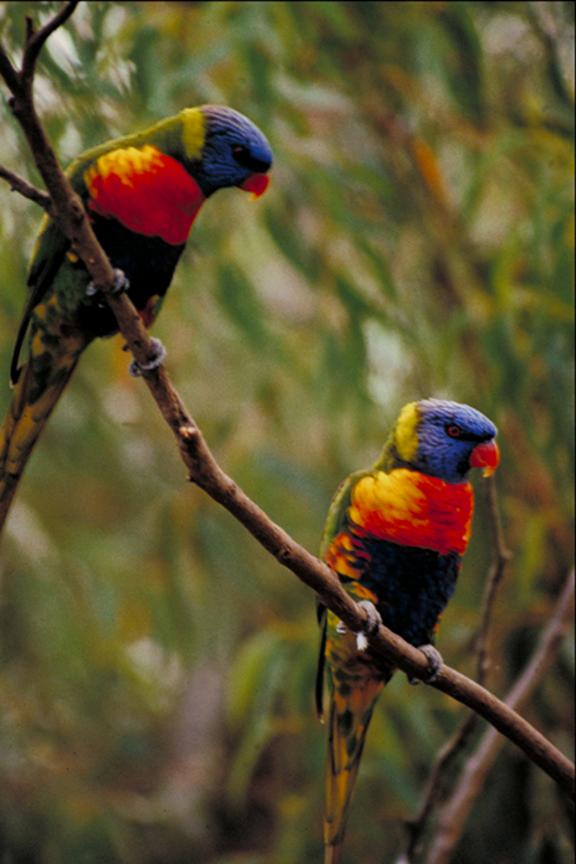 Natural areas. Australia lies within the four geographical belts - subekvatorialnoho, tropical, subtropical and temperate. Because of humidity changes from north to south and from east to west, natural areas change each other in the form of semirings surrounding the inner region.

Off from the ocean in the interior of mainland forests pass into woodlands and savannas. In the area formed red і red-brown soils. Woodlands form the eucalyptus, which grow under the canopy of acacia and casuarina low. In savanna grasses occur in thick original bottle trees, thick trunk which narrows the top. It accumulates wood moisture, which then spends in the dry season. Unusual and herbal endemic trees that have a direct short barrel, topped by a bunch of long narrow leaves, sticking out in all sides and resemble a haystack. In this zone live kangaroo, wombat, echidna, many birds. Termites build huge termite mounds in the savannas.

And semi-desert zone takes immense internal parts mainland. There are Great Sandy desert та Great Victoria DesertWhose names already indicate their dimensions. Sun baked surface is covered with reddish sand or rozsypyscha stones. Such coloring them by the iron compounds contained in rocks. Brown та gray-brown soils formed not only de-de. Prostupayut spots in reducing salt marshes. Vegetation is very poor and sparse. On the barren plains of bushes grow only here and there Loboda, stunted acacia thorns and weak dwarf eucalyptus. In quicksand settled only spynifeks - orbed cereals, typical desert plant. Green no mercy in the sun even plants are reddish. Unlike the deserts of Africa, Australia no oases, but the Australian desert does not appear lifeless, like such as the Sahara(Picture). In the semi-deserts are formed impenetrable thickets of prickly zhorstkolystyh, densely interwoven, sometimes impenetrable evergreen shrub with cluster of eucalyptus and acacia. These beds called scratch. In the deserts are inhabited kangaroo, wombat, the dog branding, echidna, emu ostrich, lizard and snake. 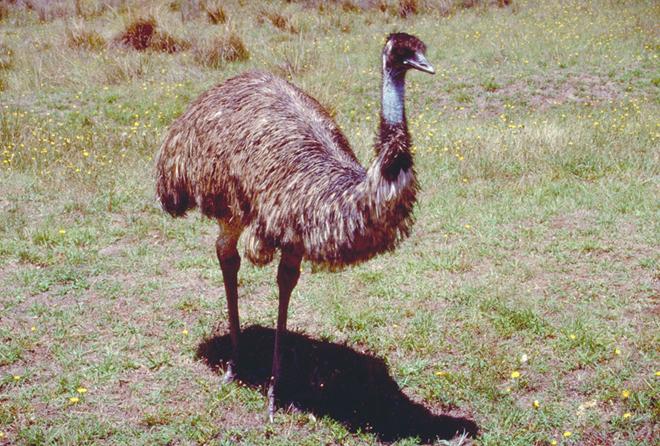 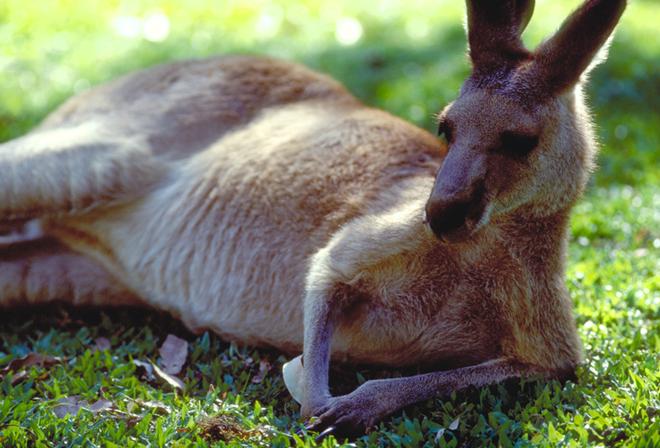 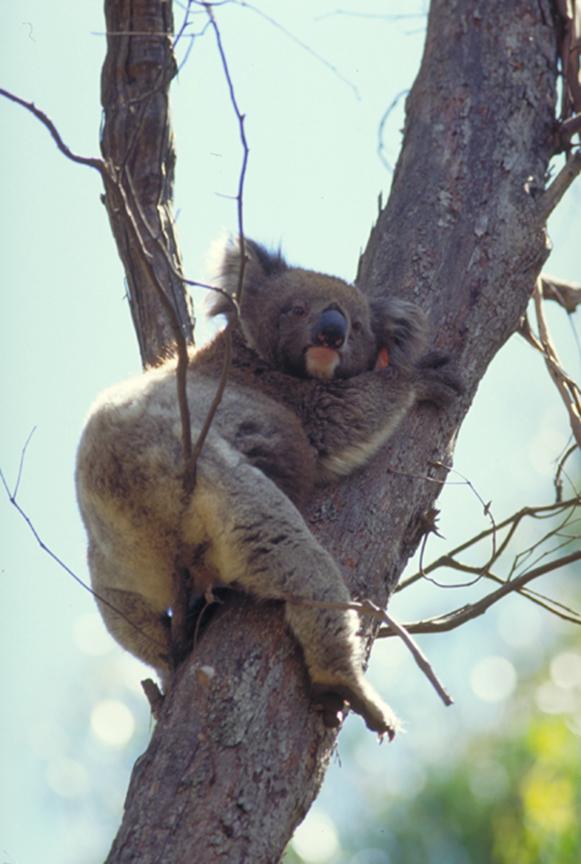 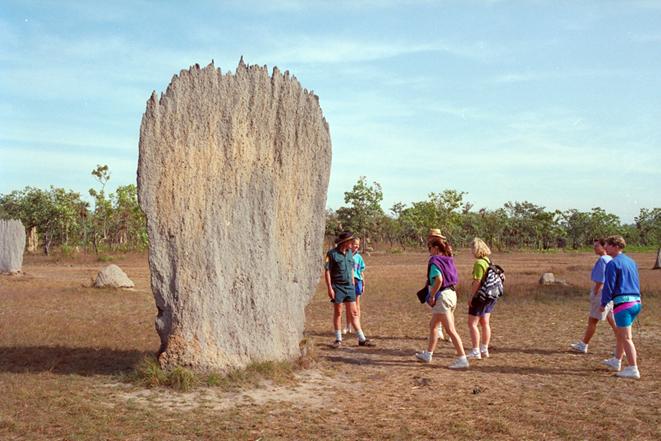 In the rainforests of Australia Kropyvne growing tree that obpikaye careless traveler so much that burns even more noticeable months later.

CHANGING NATURE OF MAN. Changing nature of Australia began with the advent mainland immigrants. In place of forests were cut out field. Characteristic sign were pastures for cattle enormous size. In savannas and semi-deserts due to over grazing sheep began disappearing vegetation reinforcing Sands. This led to the demystification of the sands and converting grassland to barren land. The attack on the natural habitat of wild animals and predatory hunting of them resulted in the reduction and even complete extinction of some species.

In addition, the settlers brought "foreign" plants and Animals violated the natural ecological balance. Particularly disastrous Imported few seemingly humble rabbit. Natural conditions were Australia so favorable for them, rabbits multiplied in large numbers. They holes dug in the fields, poshkodzhuvaly fruit trees, destroying crops and ate grass, eliminating not only feed the sheep, but also wild herbivores. Rabbit became a real disaster for Australia. With them began the war by different ways: shot, building wire fences, and finally resorted to biological weapons - in laboratories pulled mosquitoes infected with fatal virus for rabbits. This greatly reduced their numbers, but by the end of the problem not resolved. So at the end of the nineteenth century. Australia passed a bill that prohibit the import to plants and animals from other continents, and limit the export of local.

For the protection of the unique nature of Australia almost 20% mainland territory declared national parks and reserves.

1. Why is Australia so many endemic species of plants and animals?

2. Consider why the eucalyptus trees is called without shadow.

3. What unusual animals live in Australia?

4. What are the natural areas in Australia had the most spread? Why?

5. What are the environmental consequences of migration to Australia had plants and animals from other continents?