2.     What environmental conditions contribute to the development of Australia Industry and agriculture?

POPULATION. A man appeared on the mainland about 40 thousand years ago. Scientists believe that Australia was populated by people with South-East Asia.

Modern Australian population covers two main groups. The first includes Australians, Aborigines - Native people of the mainland. They include to avstraloyidnoyi race. Word aborigine means native, native. Before Europeans lived in Australia about 700 aboriginal tribes, who spoke on 200 local languages. They had a rich culture: myths, rituals, Rock Paintings, Ritual  masks and know how special body paint. Before coming to the mainland Europeans, Aborigines were at very low level of development. They do not engage in any farming or ranching, could not weave fabric and process metals. They lived by hunting and picking and led a nomadic life, moving from one place to another.

In the nineteenth century. England announced their Australian colony. After the arrival of Europeans on the mainland, most Aborigines were destroyed. A those remaining were vidtisnyaty deep into the mainland in desert areas. Now indigenous groups make up only 1,5% of the population of Australia. They were equal citizens  their country. Some of them work on farms, some still semi lifestyle.

The second group went public - Anglo-Australians- Descendants of colonists, settlers from England. Today they constitute the main population of Australia. In the last decade in Australia and settled immigrants from other countries in Europe, Asia and Africa. They brought here a lot from his culture, welfare, labor skills. 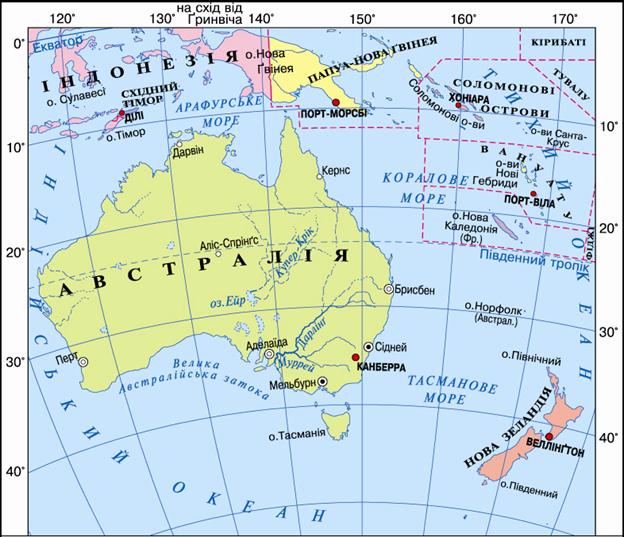 Australia UNION. On Territory of Australia is the only state - Australia. Apart mainland, it includes also the island of Tasmania and a number of small islands near the mainland coast. Australia - sixth largest territory in the world. Now this is not a colony and independent sovereign state, which is part British Commonwealth nations. Commonwealth - an association of states, which includes the UK and countries which were its colonies. So officially the head of Australia is Queen of Great Britain, and the official language - English.

With a huge area, Australia is sparsely populated country. There  lives only 19.6 million people, while only one in New York City (U.S.) Tokyo (Japan) Live 8 million population of the territory is placed unevenly. Most are concentrated in coastal areas in the east and southwest. Desert is the central and western parts of sparsely populated or totally uninhabited. It due to natural conditions and history of the continent by Europeans. Most Australians live in cities, the biggest of which is Sydney, Melbourne, Brisbane, Adelaide. Capital - CanberraTo be specially built to meet the capital role.

The dispute between the Sydney and Melbourne for the right to the capital was settled in 1927 Name capital Canberra Aboriginal language means meeting place. It is designed as a garden city, which blew up in 1912 million trees. In Canberra hosted the state parliament, foreign embassies States, many administrative and cultural centers. In the capital there industry, but many parks and gardens. 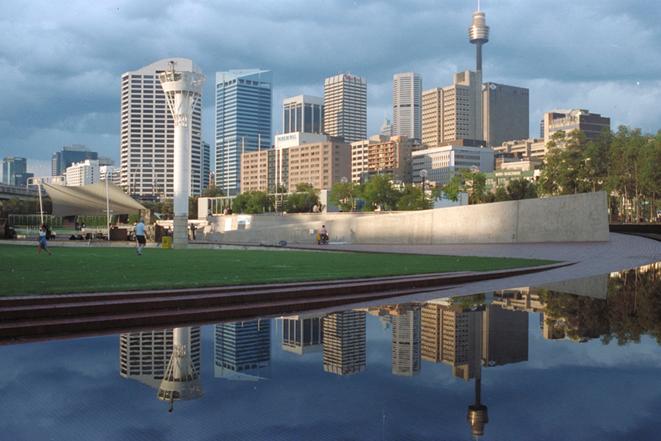 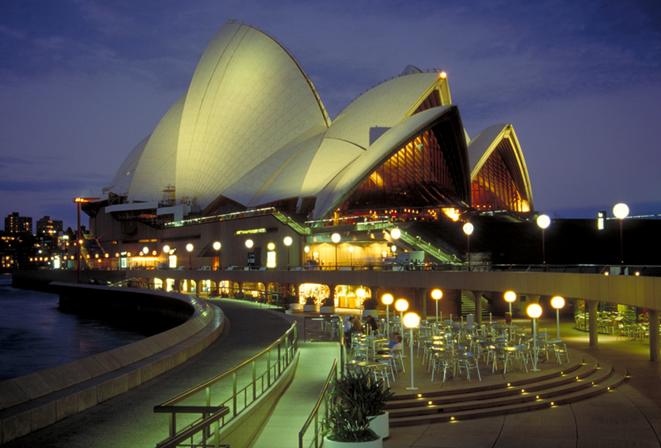 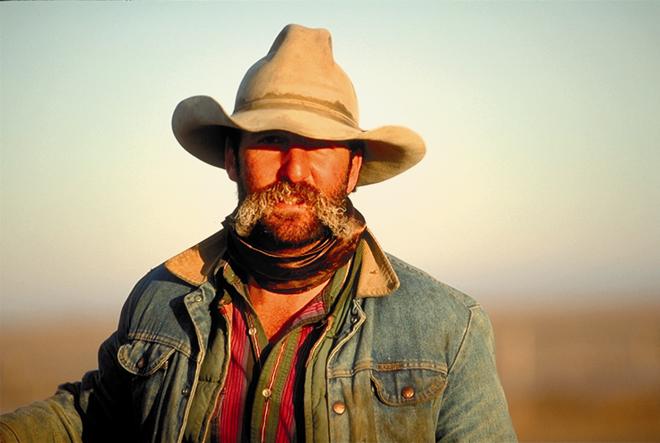 AGRICULTURE. Australia belongs to a highly countries. The leading role in its economy is IndustryIn which all the developed area. Based on various formed minerals mining industry. With ore deposits of smelted steel mills ferrous (iron, steel) and nonferrous metals (Aluminum, nickel, tin, etc.).. Fuel resources are used to receive electricity at power stations, which together with give hydropower electricity industry, agriculture, for everyday needs. Coal, gold, iron ore exported to other countries, most - in Japan. In engineering plants produce various machines, devices, electrical equipment. In the chemical industry producing chemical fibers, plastics, fertilizers for agriculture economy. A well-developed and food industry: oil-and cheese-making, production cans and more. 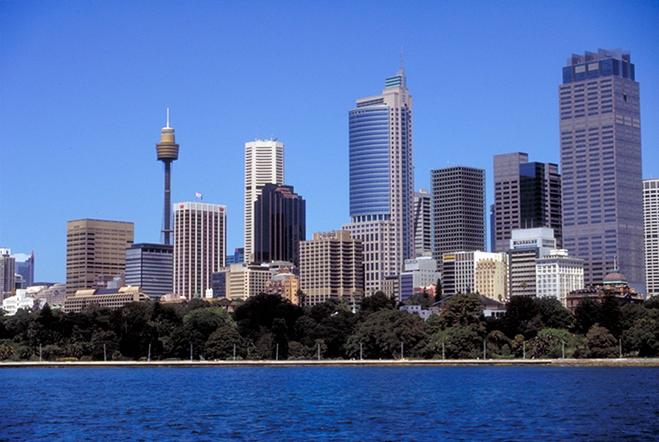 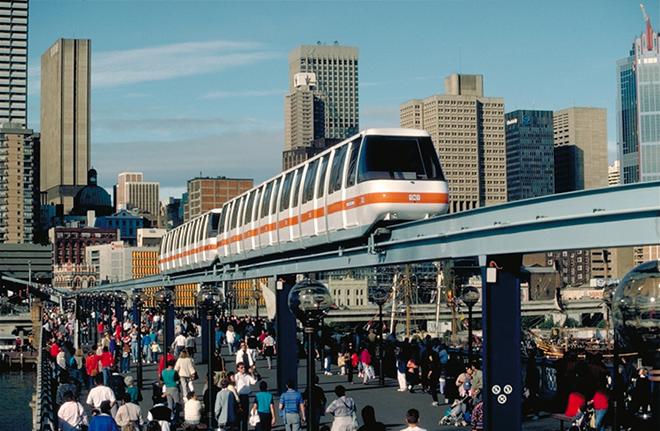 Agriculture has a high level of development. Interestingly, in Australia was not the wild plants that a person could grow. Not was and animals that could tame and breed. Because the indigenous population not know about farming and livestock until the coming of Europeans, who brought cultivated plants and domestic animals. Thus, settlers from England brought the sheep. In Australian savannas and semi-year round, they graze on natural pastures. Subsequently, sheep breeding was the main agricultural sector. In Australia the world's largest sheep population. It provides more than half the world high-end cut wool. Australian merino - breed sheep, which gives thin white hair length 10 cm, which is considered the best in the world for quality. From nastryhayut one sheep to 6.5 kg of wool. In Australia there is a real cult wool - the whole country follows the rate of wool auctions, and on TV There is a special review of wool.

Considerable remoteness of Australia from other continents contributed to the development Transport, particularly air and sea. Road and rail are made internal transportation.

3.     In which part of the country focus wheat, sugarcane, grapes?

4.     Which area is located and where land unsuitable for agricultural use?

1. Australian-Aborigines constitute only 1.5% of the population of Australia. Determine how much of the country lives of indigenous people.

3. What factors influenced the population distribution?

4. Why in Australia had received Development of sheep?

5. Australians call flying people. Consider that the climatic and weather conditions contributed to a wide development of air transport within the continent?