1.     Remember how geography affects mainland to its climate.

GENERAL FEATURES OF CLIMATE. Australia - the most droughty continent of the Earth. It gets 5 times less rain than Africa. Domination in Australia's tropical desert climate caused major klimatotvirnymy factors.

Great number solar heat Australia, like South Africa, gets the location near the equator and the Tropic of both sides. Therefore, the average monthly Temperature there is no summer or winter does not fall below 10 0С.

Features circulation air masses determine the southeastern trade winds that prevail during the year. They though blowing from the ocean, but do not bring rain. Because trade winds - is descending air currents. Rainfall can be formed only when meeting moist air from the mountains that lead him upward. Therefore over essentially a flat Australia, they form a dry and hot weather. From the north and south in the hinterland of the continent enters the sea air, but it quickly warmed up and loses moisture.

Laying surfaceIncluding mountains and flow, significantly affect coastal climate. Thus, air masses, which are south-east trade winds from the Pacific Ocean, heated and saturated with moisture over warm Shidnoavstraliyskoyu Drift. In eastern perepynyaye their mainland Great Dividing Range. So its Windward slopes coast abundantly moistened. It falls over 1500 mm of rain per year. In But the central and western parts of the continent, these air masses have already come dehydrated, there is a lack of moisture. Most of the length of Australia from the west east than South Africa provides an opportunity to form a continental air masses and makes it drier.

SEASONS YEAR. Summer from December to February, the mainland very warm: average temperature for north reachesє +30 0C, and the south 20 0S. Above the central and southern areas of Australia set a high pressure therefore dominates cloudless, dry and hot weather. On the east coast of moisture enough, because the weather there is hot and humid.

In winter, from June to August, the mainland noticeably cooled. In northern average monthly temperature is 25 0C, in other parts mainland 10 0C. Almost all the high-set pressure. The flat part turns under the influence of dry southeast trade winds and receives almost no rain. On the east coast, where, as in summer, blowing south-east of the Passat Pacific is warm and humid weather. 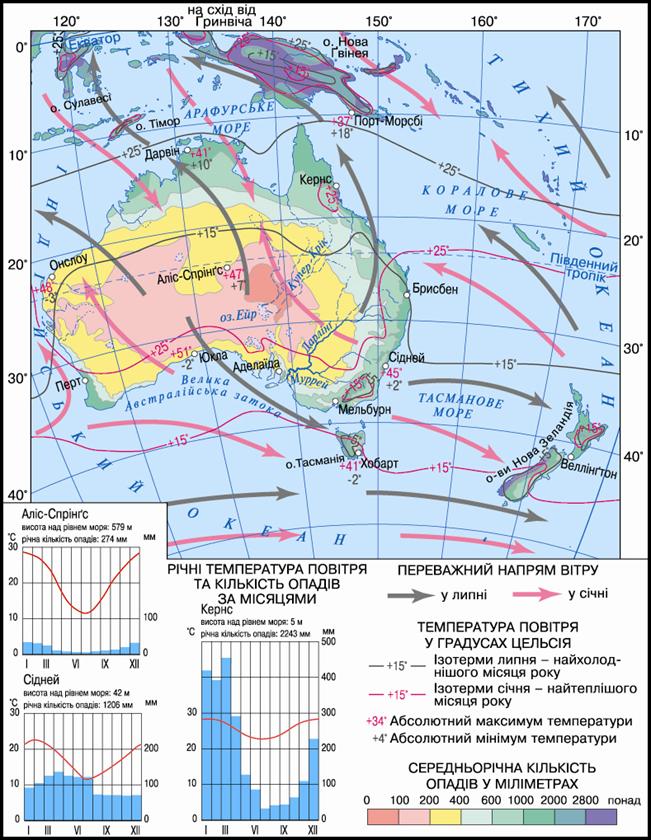 3.     In which part of Australia's trade winds prevail?

4.     What territory are under the influence of Western winds?

5.     Determine the amount of precipitation in coastal and interior of the continent.

7.     Which climatic zone occupies the largest area in Australia?

У тropichnomu climatic zone is most of the mainland. Here we have tropical air mass. The temperature high: summer 1930 0C, winter 1915 0S. By moistening in the belt are two climatic regions: west of tropical desert climate (dry hot summers and warm dry winter) and on the eastern coast of the Pacific tropical humid climates (Year-round wet and warm).

У temperate zone is only Tasmania. There are rulers west winds. They bring the Indian Ocean maritime air masses, which cause cloudy and rainy weather. As a consequence - Moderate air temperatures and plenty of rain. Winter is relatively warm, summer cool. It formed moderate maritime climate.

Most of Australia's climate was suitable for human life. 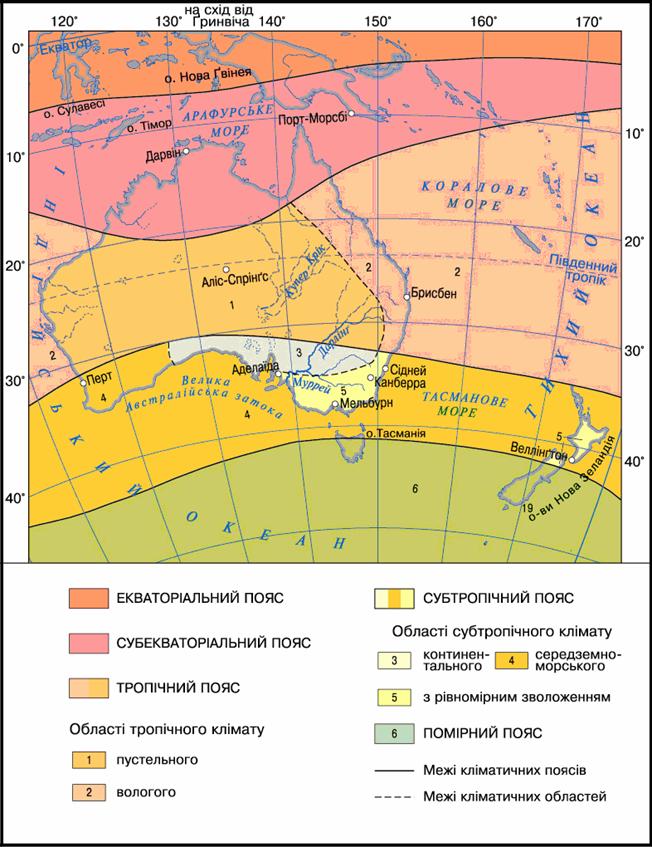 River. Due to dominance of dry Climate in Australia there are no large rivers flowing. Most of them shallow and often dry, because the main role in their power play few rains. These are river Indian Ocean. In the Pacific Ocean flowing rivers of the Great Dividing Range. They are short but flowing, because the abundant rainfall year-round feed. With more same part of the continent But there is no runoff into the ocean. In the interior desert areas formed a network temporary drying up of watercourses - Creek. Their dry water channels only fills after rare rains in the upper and then quickly disappear, exposing bottom. Thus, the dry riverbed Cooper Creeklost in the desert and filled with water only once every few decades. 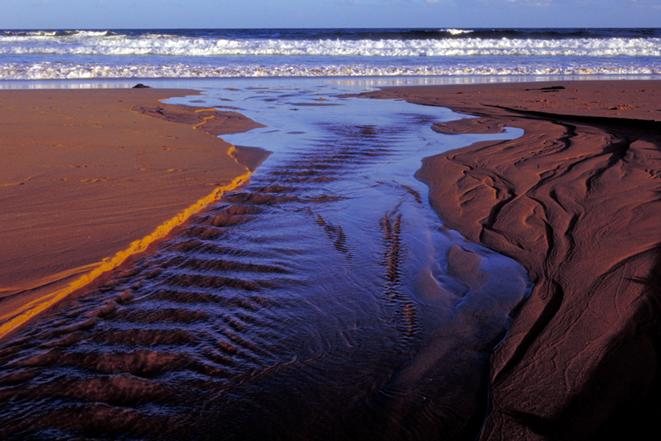 Flowing rivers are just east of the mainland, where much rain falls. Murray - Australia's main river. It originates at the highest massif of the Great Dividing the spine, where snow falls in winter. Flowing through the arid territory, not dry, but only very milli. Constant power it provides not only rain but also snow thawed water. When it rains heavily Murray spread on a flat plain. Darling- The largest tributary of the Murray, is longer than the main river itself. However, it is less affluent and in the dry winter season is dry and often does not reach the Murray, becoming a separate reservoir. The waters of both rivers are used for irrigation fertile but arid lands. To do this they created a large reservoir.

LAKE. Majority Australia closed lakes and saline. They are without water and, like the Creek, filled with water only after rains. Most lake Air lies in the basin at 12 m below the ocean. It receives water from the area equal to France, Spain and Portugal together taken, but most of it goes into the sand. Size and shape of the lake changed depending on rainfall. During the rains in the Lake Creek and flow into it increases. In the dry season its shallow plot and covered with dry crust of salt. During his Air bezzhyttyevist called "dead heart of Australia.

Many salt lakes inland drainage in the south and southeast west of the mainland.

UNDERGROUND WATER. Lack of surface water nature compensated Australia large reserves of groundwater. They collected in the deflection of the foundation platform. Great Artesian Pool, covering almost all of central lowlands - one of the largest in the world. Water bearing horizons there are at great depths. Brackish water in them and often warm. However, in desert areas is the only source of water supply. They are used in mainly for the needs of industry and transport.

1. Why in most of Australia's arid climate prevails?

3. In regions of Australia where climatic conditions are favorable for life and business human activities?

4. Why Australia's rivers are shallow?

7.     With any of the lakes in Africa has much in common Australian Lake Eyre? What are the reasons for their similarities?

8.     Why say that the year turned over in Australia inside out?