2. As for inland waters may marked relief features?

River. "Naymokrisha" South America has flowing rivers, which feed mainly abundant rainfall. They have a dense network cover all his territory. Andes is the main watershed - from the eastern slopes and more extensive plains rivers flow into the Atlantic Ocean and the western - short river flowing into the Pacific Ocean. Unlike Australia, the region Internal drain cover small areas of arid plateaus Central Andes. Major river systems formed on the plain east mainland.

Grandiose Amazon - naypovnovodnisha river globe. Its annual runoff in the downstream 15% flow of all rivers. Mara and UcayaliThat originated in the Andes. Foam flows they rush deep gorges, and Escaping the plain merge into one river. Entitled Amazon it crosses at most planet low-lying valley and empties into the Atlantic Ocean. Its size is surprising: in length (6437 km) Amazon second only to the Nile, the width of the channels at the bottom flow is 20 km and depth - 50 m at the mouth width reaches 80 km and depth - 90 m!

Amazon lowlands of the Amazon flows and is typical flowing river. In contrast to the Nile, flowing into it a lot and left, and Right tributaries. When the rainy season in the Northern Hemisphere, while the bulk bring water in her left tributaries of the Guiana Plateau. When the rainy season begins in the Southern Hemisphere, the more water brought right tributaries. So Amazon flowing year round. During rains the water level in the river rises 15 m. It spreads, flood large areas, forming impenetrable swamp. Amazon is the world's largest pool, which is equal to the square of the whole of Australia - more than 7 million km2. In the Amazon flow over 500 large  tributaries, which form a huge river system. It makes so much per year of water in the Atlantic Ocean, which in 12 days could fill the Sea of Azov.

Interestingly, the Amazon deltaic not because sediments at the mouth washed out its mighty flow. Wash them and the sea tides. Amazon shipping almost all along. Even distance of 1700 km from the mouth of the river depth is 50 m. This allows go deep into the continent ocean ships.

Parana - The second largest river of South America (4400 km). Parana and its tributaries flowing Brazilian plateau, forming rapids and several large waterfalls. The largest of these - Iguazu on one of the tributaries of the Paran

Orinoco - The third longest (2730 km) river in South America. The water level in it depends on rains that fall in the northern summer part of its basin. The difference between summer and winter water level reaches 15 m. Beginning River on the slopes of the Guiana Plateau lies in the abundant year-round moistening. They have plenty of rapids. Only on wetlands Orinokskiy lowland Orinoco is navigable. Ocean vessel to rise 400 km from the mouth, while tangible sea tides. Over 150 km to the confluence Atlantic Orinoco decomposed into sleeves and form large wetlands delta. In the Orinoco basin, the river ChurуN is the highest waterfall world - Аnhel (1054 m). Legend of the huge, decreasing "Straight from heaven" waterfall has been known even in Hui century. Spanish conquerors. But Could see it  only in 1935 with Gemma Angel aircraft pilot. This waterfall is 21 times higher than Niagara. Height of drop of water is so large that flow into a spray, not reaching the bottom of the abyss. And at the bottom, with narodzhuyuchys if nothing is in full swing river.

The names of rivers Amazon, Parana and Orinocotranslated into the languages of various Indian tribes the same - large water. 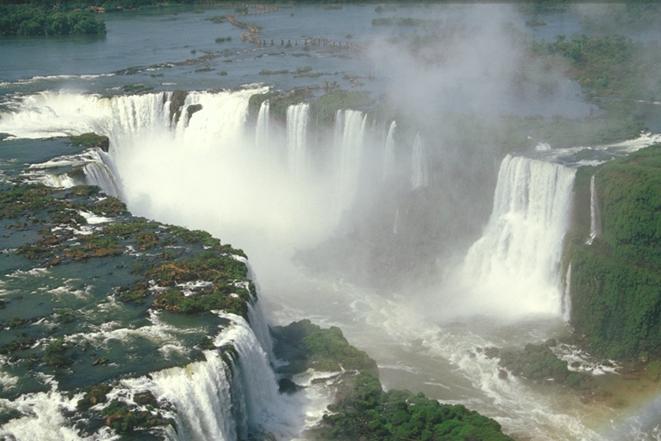 LAKE. Lakes in South America a little. Maracaibo is the largest and Titicaca. Maracaibolies on the Caribbean coast and connected with him narrow strait ago lake called Laguna. The translation of the languages of local peoples name Maracaibo means Mary land (Mara - name of the leader, who ruled in the XVAnd art.).

During the inflow into the lake can go sea ship. Lake basin is of tectonic origin, as the depth reaches 250 m. Fresh water in the lake and only when the tide somewhat osolonyuyetsya. The banks are low and wetlands. Maracaibo - unique for its oil reserves. In his days drilled more than 6 thousand oil wells.

In Andes at an altitude of 3800 m is most of the highland lakes in the world - Lake Titicaca. In Translated from the Quechua Indian language means his name rock near extraction ore (titi - Place of extraction ore Kaka - Rock). The lake falls many rivers, and flows only one. Because fresh water in the lake. Its shores cool and cut. Lake deep enough. Despite a considerable height, water temperature in it for a year is 14 0C. Therefore, Lake mitigate climate surrounding areas. In shallow water lake grows cane Totoro. Perehnyvayuchy, it falls to the bottom, and it begin to grow new plants. Gradually formed reed islands. Sometimes the winds and waves separated from the bottom of this island, and he is floating. In trostynovyh Islands Indians live. They occasionally throw on the surface of the island of new layers fresh cut cane and thus support the buoyancy of the island.

Inland waters of South America have great role in the life of the population. In low-lying plains are navigable. In rivers with mountainous nature of the current power stations are built. In arid areas water used for irrigation. Rivers and lakes are rich in fish. 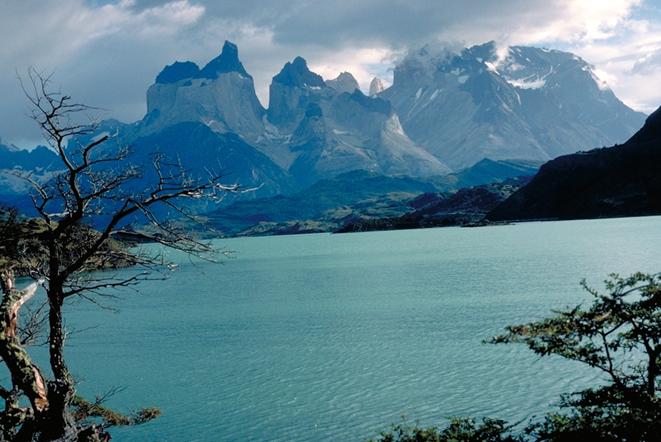 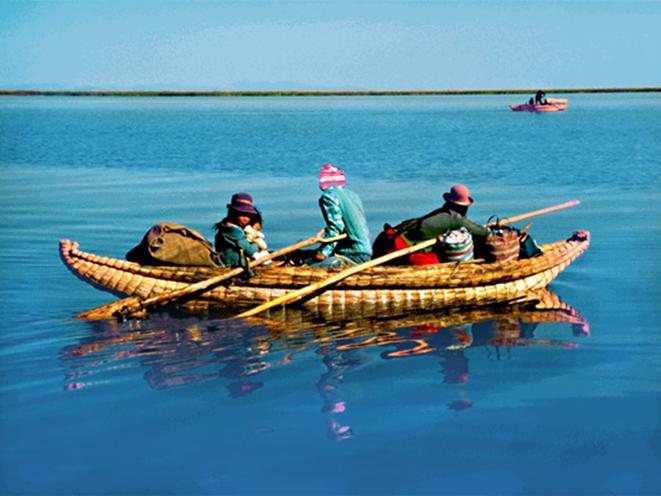 1. On which account for most of the ocean surface drain?

2. What type of power prevails in the rivers of South America?

3. Why Amazon flowing year round? Compare it with African river Congo.

4. Tell us about the great lakes of South America.

5. What is the role of internal water in nature and life Rights?