1. Remember that the main factors shaping the climate.

2. What is poyasnosti pattern altitude?

GENERAL FEATURES OF CLIMATE. Most of South America lies in the equatorial and tropical latitudes, ie in hot thermal zone. So, it reaches a large surface number solar heat. So very warm climate of the mainland, but not so hot as in Africa or Australia. Only in the extreme south, where a sizable breathing cold of Antarctica, the average temperature is low. Hottest place in South America located in the central plains on the mainland Gran Chaco, which recorded nearly 49 0C. The coldest - in southeast, where the mercury fallen to -33 0С.

South America - nayvolohishyy continent of the globe. Above her down twice more rain than over any other continent. This feature is caused by climate circulation of air masses. Over large part of the mainland dominated wet  equatorial air masses. while a large role south-eastern and north-east trade winds, which "deliver" moist air masses from the Atlantic Ocean. Instead, the impact of tropical dry weight restricted - climate, they form only on the west coast. Nayvolohishe place South America is on the northwest coast at the foot of the Andes, where fall 10 000 mm per year.

An important factor is klimatotvirnym laying surface. Thus, warm Guianaand Brazil's current additionally saturate the air moist and help to increase rainfall. A cold Peruvian currentIn contrast, - reduces. On moisture affects the distribution of relief. Thus, the plain east of the mainland no obstacles winds on the way and they penetrate deep into the Andes up to. Windward eastern slopes plateau of the trade winds get heavy rains. Conversely, in the mountainous west air masses from the Pacific have an impact only on a narrow strip coast since then the way they deputize the high Andes. 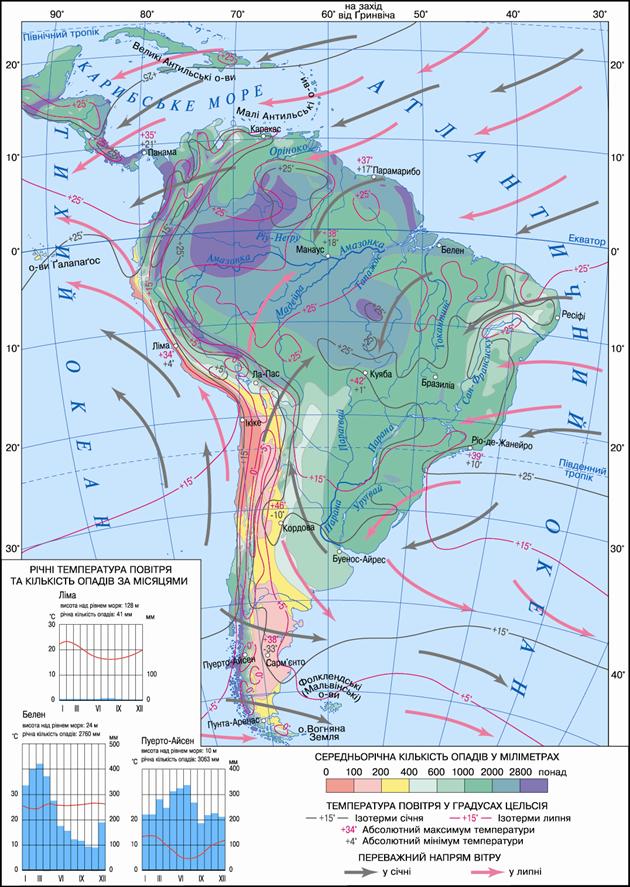 2.     Which of climatic zones is the largest area?

3.     As climate change on the mainland in promoting from north to south and from west to east?

4.     Describe the climate of the equatorial belt. Which chart describes the type of equatorial climate? Compare this with the data same zone in Africa.

В equatorial climatic zone year-round hot and humid dominate equatorial air masses. So during the year temperatures are high (over 26 0C) and fall heavy precipitation (up to 3 000 mm). Excessive humidity is particularly felt in the morning, midday sun heats the air, and it decreases. At midnight again stifling becomes of water vapor and nature once again preparing for a new shower. This type of climate called equatorial constantly hot and humid constantly.

У subekvatorialnomu climatic zone air mass change during the year: summer coming wet equatorial mass that are much rain (up to 2 000 mm) in winter - dry rain, then rain is not falling for several months. So here two distinct seasons: wet and dry hot summers, often even hotter winter (28 0C). Within the zone formed subekvatorialnyy always hot and humid type of climate variables.

Climate tropical zone different. In eastern Brazilian plateau, which is influenced trade winds from the Atlantic, a lot of rain falls (up to 2 000 mm per year). Temperature the warmest month is 26 0C, the coldest 16 ... 21 0S. It - tropical humid Climate type. With advance deep into the mainland rainfall decreases, the length of the dry season increases. And on narrow strip Pacific coast, where there is the high atmospheric pressure and cold Peruvian current passes, which do not contribute formation of precipitation, a shortage of moisture (up to 50 mm per year). Moisturize only bring the fog and heavy dew. Air temperatures are relatively low (15 ... 20 0C). It formed tropical desert type climate.

У subtropical climatic zoneAs in subekvatorialnomu, air masses vary seasonally: in summer dominate equatorial wet and winter - dry tropical. In the east zone climate warm and humid (Up to 1000 mm per year). With advance deep into the mainland, he becomes dry continental (500 mm by year). On the Pacific coast climate is formed subtropical Mediterranean type, With dry summers and warm wet winters.

Moderate climatic zone covers the south side of the continent. During the year there are rulers moderate air masses. Here, in different from the rest of the continent, moist air moves on the opposite side - the west, from the Pacific Ocean. His bear West winds blowing in these latitudes. But very soon the way they perepynyayut Andes. Mountains and here - a natural border that separates two climatic region. Thus, West Coast temperate climate sea. He constantly moist (3000 mm per year). This stretch of coast often called "wet corner" of South America. Weather there cool (Winter 4 0C, in summer 1910 0C), rainy, with strong winds. On the east coast of the same climate is temperate continental with cold winters and dry warm summers. The rainfall is only 300 mm per year. In winter, strong winds can cause a temperature drop to -30 0C and even in summer snow storm to bring snow from the Near Antarctica.

In the Andes mountains formed alpine climate. In the mountains, crossing all climatic zones, it changes not only from north to south, but also with height. In a show of bottom to top there is a gradual decrease in temperature (6 0C 1 km) and increased rainfall. In the lower mountain zone climate such same as the surrounding plain area. Yes, near the equator in the lower slopes of the Andean zone of equatorial climate, and above the snow line (4 600 m) lying snow and ice. Strongest set of climate high plateaus in the central Andes. Thin dry air, handful of rain, snow, hurricane winds form naybezplidnishi place in the world.

General climate of South America, which actually much heat and moisture over much of mainland Fit for life commercial activity. There are all conditions for growing different cultures. But often occur and natural disasters: after the long rains coming from the banks of the river, zatoplyuyuchy fields settlement roads. In the central areas often come unexpected drought or cold. 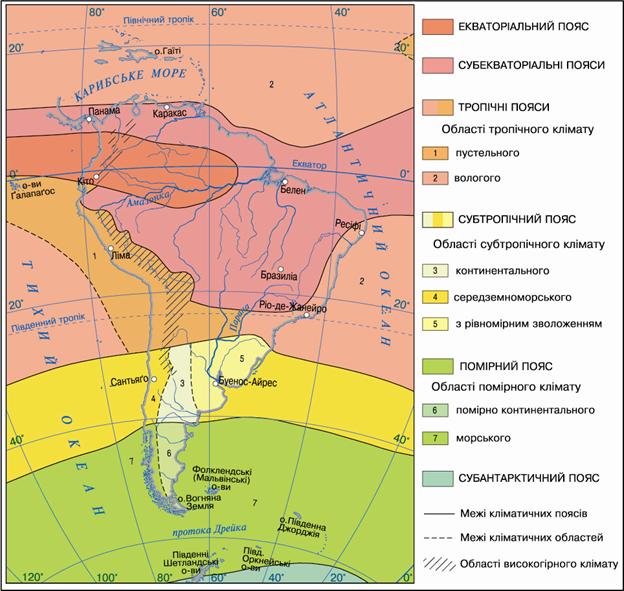 2. What climate zone, which is South America is not in Africa?

3. Why the impact on Pacific climate of South America is much smaller than the Atlantic.

4.     Compare the role of the Andes and the Great Dividing range in the distribution of precipitation on the mainland.

5.     Consider why the trade winds are well moisturize South America, and bad - Africa and Australia?