1. Remember, to which the ancient continent included Africa, Australia and South America.

2. What landforms corresponding platforms and which - orogen?

Geological structure. Antarctica once with Africa, Australia and South America formed the ancient continent Gondwana. Therefore, it is based on old Precambrian Antarctic platform. Platform basement and folded metamorphic rocks of magmatic, mostly granite. It covers the top cover sediments. Interestingly, they had found the remains of ancient plants and animals. Platform meets flat terrain. In the western part of the mainland in the Alpine epoch horotvorennya formed orogen. She was in relief meet the mountain that rose along faults. Patches there rise volcanoes.

Millions of years ago Antarctica was warm temperate climate and on the mainland have grown pine and beech. Icing began about 20 million years ago and subsequently covered continent powerful icecap. Under pressure from its surface was as vdavlena and now it is sometimes even below the ocean. 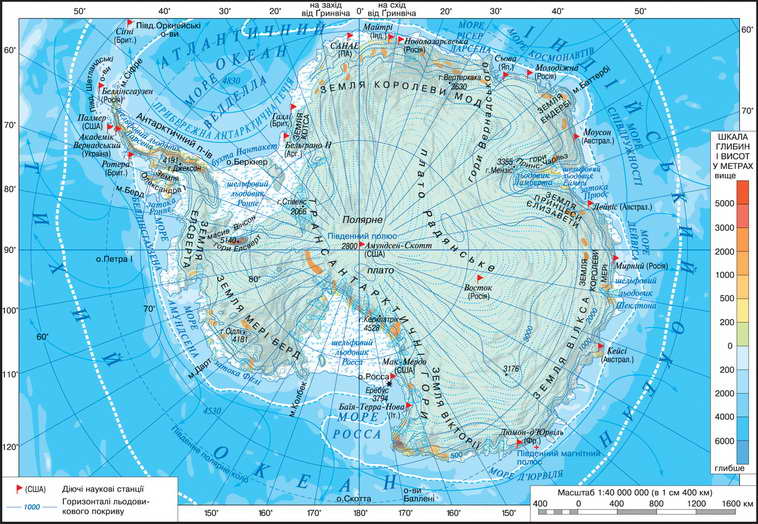 1. Where does the orogen?

2. What landform is dominated - plain or mountain?

3. Name the largest ice shelf. Where are they located?

4. What are minerals that are in the depths of Antarctica.

Powerful ice cap thickness of 2 000-4 000 m covers almost whole continent. It looks like a dome, upraised in the central part. Thickness ice makes Antarctica the highest continent of the Earth - their average height is about 2 000 m. icy surface causes monotonous landscape of huge spaces that resembles except for homogeneity that the surface ocean. Endless plain of ice stretches for thousands kilometers. Snow dunes on it like a wave. Just off the coast and somewhere in the hinterland, like islands, mountain ranges rise and separate peaks. Antarctica resembles ocean and volume of water, however, the water in it is in solid condition.

You already know that under the force gravity and terrain features of glaciers may move, to flow. In Antarctica glaciers are constantly moving from center to the edges of the continent. Speed their creeping average of 200 m per year. At the edge of the continent they break and form urvysti icy shores and icebergs. In some places the ice cap slips into the ocean on the shelf and held afloat, creating ice shelf. They are made like shores. However, the ocean quickly destroys them. Therefore outlines the coastline of Antarctica by short time can significantly change - disappearing capes, peninsulas, bays, and Beach retreat for dozens of kilometers. The largest ice shelf in the world - Ross Glacier width of 800 km, a 1 100 km of ice thickness 700 m.

Ice relief - Mountains and plains, peaks and valleys - hidden, as in the thickness of water hidden relief bottom of the oceans. Between West and East Antarctica over the entire continent stretching Transantarctic Mountains. They are a kind of continuation of the Andes of South America. Their highest peaks that reach 3 000-4 000 m, rise above the ice cover of the continent. 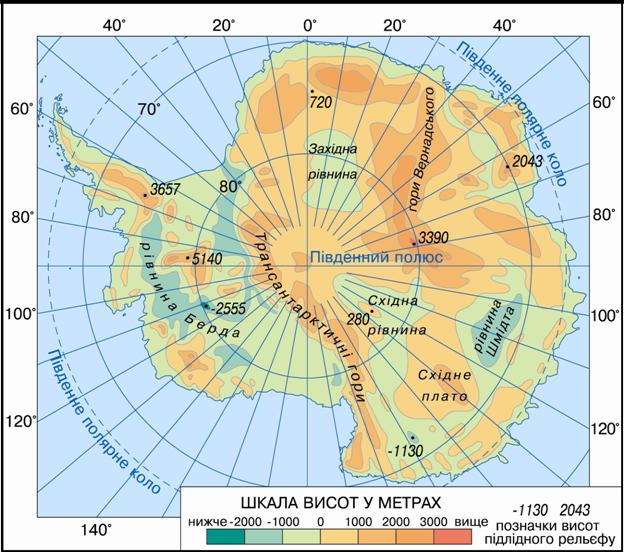 The attack of Antarctica

Moving glaciers to the coast an average speed of 200 m per year, Antarctica is trying to expand its territory, capturing the space in the ocean. Expanding at a rate for it any 5 thousand years could double its territory, through 20 thousand - connect to South America, Australia and Africa. But in reality such Antarctica attack happens. Ocean does not remain passive. He fights captured by the waters, tearing off the mainland ice, pushed in his possession. Then it drifts northward in the warm sea, where with rozpravlyayetsya them completely. Only remnants of icebergs sometimes reach Africa and the surrounding area South America.

Minerals. Already in the early stages of research in Antarctica there was found a stone coal. Moreover, the estimated geological coal in the bowels Antarctica contains more than on any other continents. Also in depths of Antarctica were found in ores of ferrous and nonferrous metals, diamonds. But decompressing the harsh conditions of the Antarctic environment associated with large difficulties.

1. Tell us about the structure of the crust of Antarctica.

2. Explain why there volcanoes in Antarctica.

3. Why terrain of Antarctica called the two-storeyed?

4. What upper surface has ice caps of Antarctica?