Remember in this connection by Arctic Circle are polar night and polar day.

Antarctica has very strict environmental conditions. Even the Arctic significantly different from its southern opposition.

CLIMATE. In Antarctica formed a very severe climate, the coldest on Earth.  It is called the mainland eternal frosts realm of blizzard and winds the world's refrigerator. This is due not only the location of Antarctica beyond the Arctic Circle, but the influence klimatotvirnyh factors.

Inflow Solar EnergyWhich heats the Earth's surface, occurs only in summer when set polar day. Then, surprisingly, comes in Antarctica as much solar energy, but also in the equatorial latitudes. However, its laying surface not hot. It due to the fact that almost 90% of solar energy snow-ice surface Antarctica reflects back into space. In winter, when comes the polar night, solar energy are almost coming, the average temperature is -60 0C. In the Antarctic research station in Russian "Vostok" was registered a record low temperature for the Earth: -89.2 0C and -90 on the surface of snow 0C. Such low temperatures on the surface of our planet is not observed anywhere else, so this region called Cold pole.

Circulation air masses in Antarctic too original. Continuing heavy cold air causes over mainland area of high atmospheric pressure downstream air. From high ice dome in the center of the continent heavy cold air mass flowing to the edges, forming a very strong drains winds. В Antarctica blowing the strongest winds on the planet. Their speed reaches 77 m / s (which is 277 km / h). Therefore, Antarctica is also Pole Wind. Hurricane winds are so often so strong that the wind measurement devices not withstanding their pressure and break down.

Antarctic air mass that formed there, differ not only by low temperatures, but also remarkable transparency and dryness. The clear air and absence of clouds do not delay and promote heat further vyholodzhennyu surface. Slight precipitation - an average of 200 mm per year (About as much as in the Sahara Desert) - Antarctica receives solid state.

In Antarctica are two climatic zones: Antarctic and subantarktychnyy. Special severity of climate characterized hinterland. In winter (from April to September) there rage frost 70 0S. Even at the height of the polar summer (in December - February) thermometer shows –30 0S. However, the weather is clear and Windless. On the shores of strong frosts are not is: winter  –35 0C in summer - About 0 0C. However, there are rulers storms that pass in storm, accompanied by snowfalls.

On the coasts and in the interior of Antarctica is area free of ice and snow. It - Antarctic oases. The temperature in summer over land there is the plus (3 0C) but decreases in height is a few meters. 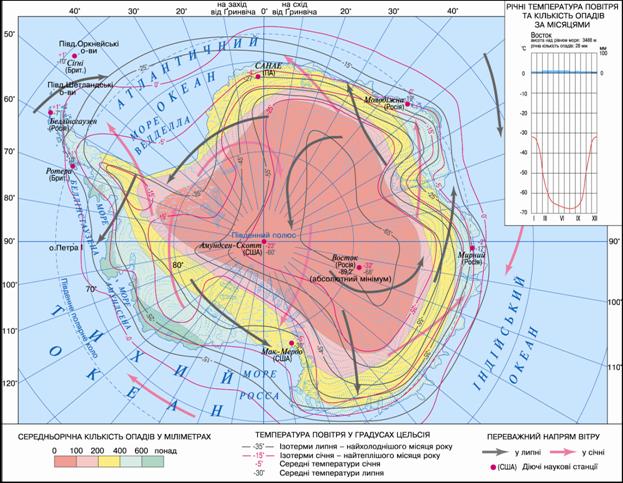 1.     What are the air temperature in winter for coastal and inland areas of Antarctica?

2.     How to change temperature in summer coasts and in the hinterland?

3.     Where is the pole of cold? What is the maximum temperature recorded there?

4.     In areas where the largest number of falls rain?

5.     How much rainfall in the hinterland mainland?

6.     What direction are the winds in winter and summer Antarctica? 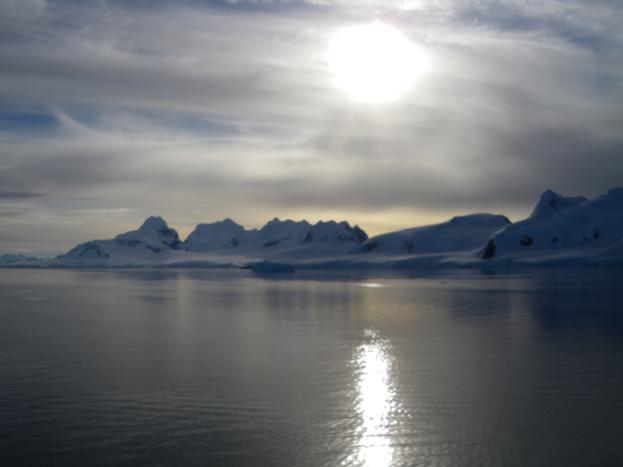 Inland waters. Antarctica - The only continent on Earth, where no permanent rivers. But in summer when melting snow and ice to the ocean passing temporary meltwater streams. Some watercourses suddenly disappear from the surface, getting into cracks or pidlodovi void, paving the way for more ice. "Life" Antarctic rivers long - 1-2 months. With the onset of autumn frost melting and runoff suspended, and deep with steep banks of the channel recorded snow.

The small lake is in the oases and coast. Among them are as fresh and very salty. Exempt from the summer lake ice and sun heats the water some of them to 12 0С.

Antarctica - the largest on the planet accumulation glaciers. In the Antarctic, "refrigerator" preserved "80% of all fresh waters of the globe. If all the ice and roztala, the global sea level rose to nearly 60 m. 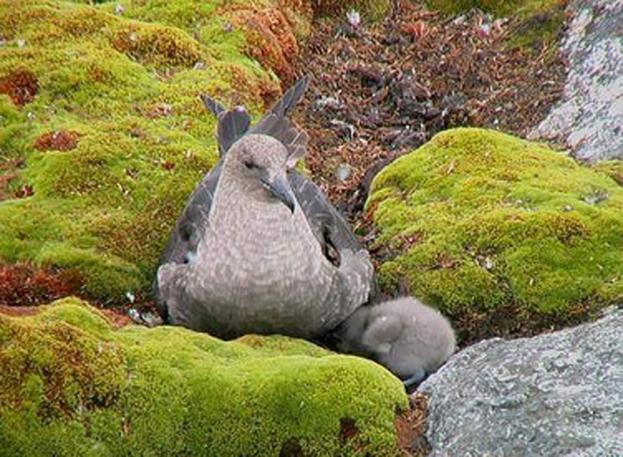 Fig. Over the short summer to raise offspring

The organic world. In Compared with other organic world mainlands Antarctica poor. Much of the continent in general and devoid of vegetation and wildlife. Near the poles in the snow live only bacteria. Thus, there is the Antarctic desert.

Plants and animals are only on the mainland and coasts Islands. Ice-free areas are covered with moss. Terrestrial algae red, green and yellow form a film on the stones and rocks even in the snow. Common and mosses.

Animal world зCD / richer vegetation. Animals concentrated on a narrow strip of coast and their life is connected with the ocean. Very peculiar birds. They all live near water, feeding on fish. The symbol of Antarctica are the penguins. The smallest of them - Ad Leopard- Seals-predators. However, the land of penguins in no enemies, they live large colonies. Penguins, especially Adyniy whale - a districtaybilsha animal of the Earth: length 33 m weight to 160 tons  Lives up to 80 years, daily eating up to 4 tons of krill (small crustaceans). Almost completely cut off, is guarded. 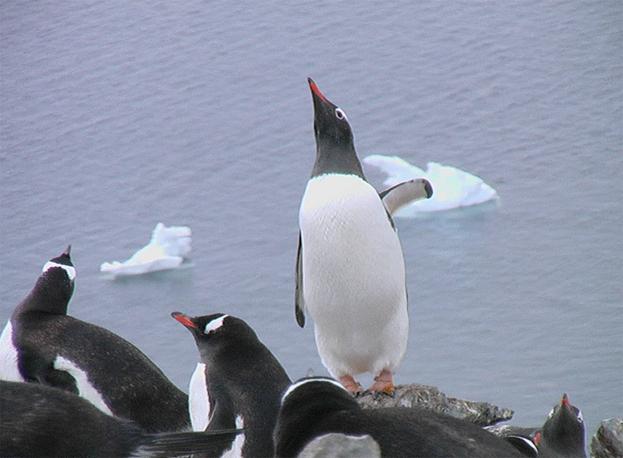 TEMPORARY POPULATION. Snow spaces of Antarctica never roamed wild tribes, there is war and fought to So far there are no industrial enterprises. Antarctica does not belong to any state. The continent has no permanent population.

However, there are half a century scholars from different countries. As a result, in Antarctica near the stations have permanent Settlements - research campus. Due to severe environmental conditions researchers are usually not more than a year, alternately. The most populous place in Antarctica are Antarctic peninsulaWhere are the most polar stations. In Antarctica appeared genuine sea and air ports, where each year hundreds come ships and aircraft. Today, Antarctica and visiting tourists. So people gradually master a rigorous and sixth continent. 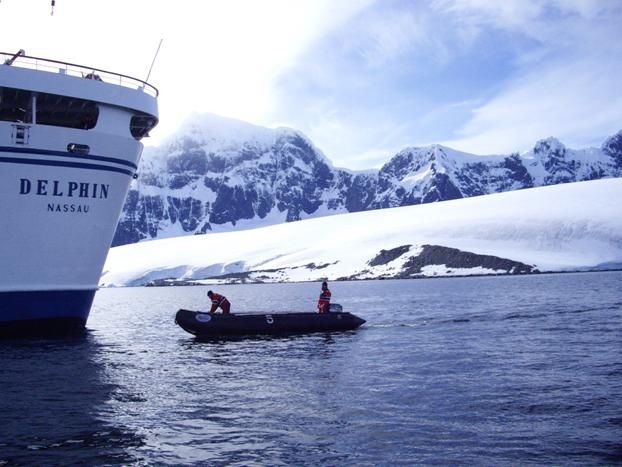 Fig. Cruise ship off the coast of Antarctica

PUBLIC NATURE. Not Despite the lack of a permanent population on the mainland, nature Antarctica requires protection. Disequilibrium between the components of nature that formed in extremely harsh environments  leads to very rapid destruction of natural systems. This is especially felt in Antarctic oases. Due to accidents of vessels that occur off the coast Antarctica, in Antarctic waters get thousands of tons of fuel. Awash created a huge oil slick. In the harsh climate they do not disappear years. Suffering from pollution primarily plankton - tons of dead crustaceans water brings to the coast. There were deaths of seals and whales.

Between nations conducting research in Antarctica, there is agreement on environmental protection measures. In particular, many protected species animals. Catch  fish and other animals Antarctic waters is limited. In matters of conservation Antarctica has remains unspoilt, netorkanoyu land.

1. Climate of Antarctica known as severe. What does it concept?

2. What winds arise in Antarctica?

3. Spread the inland waters of the mainland.

4. Oases are in Africa, and Antarctica. Do they have similarities, or just different?

5. What features of the organic world of Antarctica?