1.     Remember that handmade objects between North and South America, connecting the two oceans - the Atlantic and Pacific.

2.     When and how Christopher Columbus discovered America?

GEOGRAPHICAL LOCATION. North America fully located in Northern and Western hemispheres. She comes away with the North polar circle and in the south it crosses the northern tropics. A looming North America, like the South, like triangle, which is part of a broad (6000 km) northward. Therefore, large areas of the continent are located in the temperate zone. The narrow portion, only 100 km wide, pulled away to the south and placed in a hot zone. A considerable length of North America from north to south causing a great diversity of its nature: from deserts to arctic tropical rainforest.

The end points of the mainland to the north is Cape Merchison, on south - Cape Mar'yatoTo the west - Cape Prince of Wales, on East - cape Saint Charles. Mainlands closest neighbor is Eurasia and South America. North America from Eurasia separated narrow Bering Strait, From South America it is connected by narrow Panama isthmus (Shall be transmitted boundary between two of America). In Isthmus narrowest place in the early twentieth Art. They made it Panama Canallength of 80 km.

North America washed by three oceans: the North Arctic, Atlantic and Pacific. The waters of the Arctic Ocean Year-round temperatures are low, its bays and channels most of the year filled with ice. Instead, the Atlantic waters near the southeastern coast very warm. It was there arises a strong heat flow - Gulfstream. Towards the north it goes cold Labradorska flow, which brings a lot of icebergs. In the Pacific Ocean off the west coast mainland leaking heat Alaska current and cold California. As you know, flow substantially influence the climate of coastal zones.

The coastline of the mainland strongly divided: in the sea serve large peninsulas - Labrador, Florida, Yucatan, California, AlaskaAway in the dry bay resort - Hudson, Mexican, Alaska. Scattered off the coast of many large and small islands - Greenland, Newfoundland, Mali Antilles, Large Antilles (With islands Cuba, Jamaica, Haiti et al.). In the north of the mainland locatedCanadian Arctic Archipelago, that as if frozen in ice in the Arctic.

Many peninsulas in North America named Spanish. Yes, translated from Spanish California means flaming mountains, Labrador – country workers, Florida – country flowers. According to one version, Yucatanmeans I do not understand. On question Spaniards that landed in this place ashore in 1517, what this land, the Indians responded: "And Kyo ten, ie:" I do not understand. " Spanish accepted this answer for the name and fixed it for the peninsula. Name Alaskatranslated from the Aleutian means whale place.

Island of Newfoundland, John Cabot who discovered, in translation English meaning re-opened. The island is famous breed Newfoundland dogs who swim and dive well. This Breed brought the Indians before the arrival of Europeans. Then Newfoundland English brought to Europe. These dogs are calm and good luck, so long spasannya used to people. 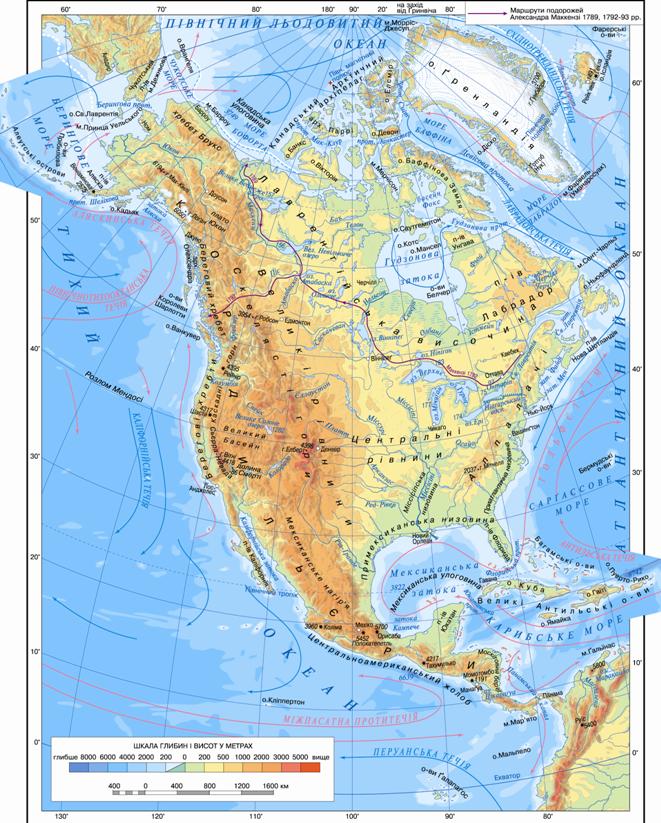 1.     Show on map areas that they studied discoverers of North America.

2.      Define coordinates of the endpoints.

3.     Which of the coasts of the mainland is the most split shoreline?

5.     Find the geographical objects that are named in honor researchers in North America.

HISTORY STUDY. In history geographical discoveries turned out that Europeans discovered North America for itself several times. You already know how it opened in 1492 Christopher Columbus. However, there is information that long before his famous voyage to North America got the Vikings - Living in Northern Europe, participating in maritime expeditions (in Russia they were called Varangians, and in Western Europe - the Normans). Thus, X century. Eric Red discovered Greenland and founded a settlement. A few years his son Leyv Erickson on small vessel reached northeast coast of North America. Vikings, like Columbus, not guess that opened a new continent. On their discovery no one knew except some northern nations, so they zostavyly not remarkable in the history.

Swimming H. Columbus began aggressive campaigns. European countries sought to snatch a bigger piece of the New World: Spain - in the south of the mainland, England and France fought for the north of the continent. These campaigns were accompanied and geographical discoveries. In XVArt. English expedition John Cabot rediscovered north-east coast of North America. In XVAnd art. Spaniard began the march Hernando CortezWhich culminated in the conquest of the ancient Aztec state that existed in the territory of present Mexico. The French explored the bay and river St. Lawrence Great Lakes shores, rowed on the Mississippi. English Henry Hudson (ХVII cent.) and Alexander Mackenzie (ХVIII cent.) examined the northern and eastern parts of the mainland.

Of Discovery - the most outstanding historical event

History knows other event that its consequences would be surpassed meeting of two worlds. Since creation of the world, except death and reincarnation of his Creator, the greatest event was the opening of the New World.

1. Compare geography of North and South America. Explain the impact location on the continent especially its nature.

2. Compare fragmentation of the coastline of North and South America.

4.     Researchers are European countries studied and settled the territories in North America?

5.     North America is smaller in area than Africa. But in North America much more diverse nature. Consider that there are reason.

1.     On the contour map of tick and sign title extreme points of North America.