1. Remember that seismic zones formed within Eurasia and its environs.

2. What do you know the great plains and high mountains are located in Eurasia?

Geological structure. Like North America, Eurasia  millions of years ago was part of an ancient continent Lavraziyi. Among the other continents of the globe it Features  extremely difficult structure of the crust. This - the result of a long and complex geological history of development.

Giant in size Eurasia is not only all Eurasian lithospheric plateBut of the other - Indo-Australian. Along the line of collision crust Crashed in the fold - there appeared Alpine-Himalayan belt of folding. Therefore, the mountain that appeared in this zone is located on the fringes along the coast, as on other continents, and inland and southern parts of Eurasia. Along the eastern coast of mainland stretches another fold belt - Pacific, that arose at the junction with the Pacific lithospheric plate.

Fold belt are seismic zones, where the intense movements of the earth's crust, earthquakes and volcanic eruptions. The largest active volcano in Europe within Mediterranean seismic beltis Hekla, Etna and Vesuvius. Active Volcanoes of Asia - Klyuchevskaya Sopka, Fujiyama, Krakatau and others - are Pacific seismic zone.

In northern Eurasia, as in North America were ancient glaciation. The Scandinavian peninsula, where the the largest center-ice, glacier nasuvavsya south. His tongue reached even in Ukraine. Glaciers melted around 14 thousand years ago. 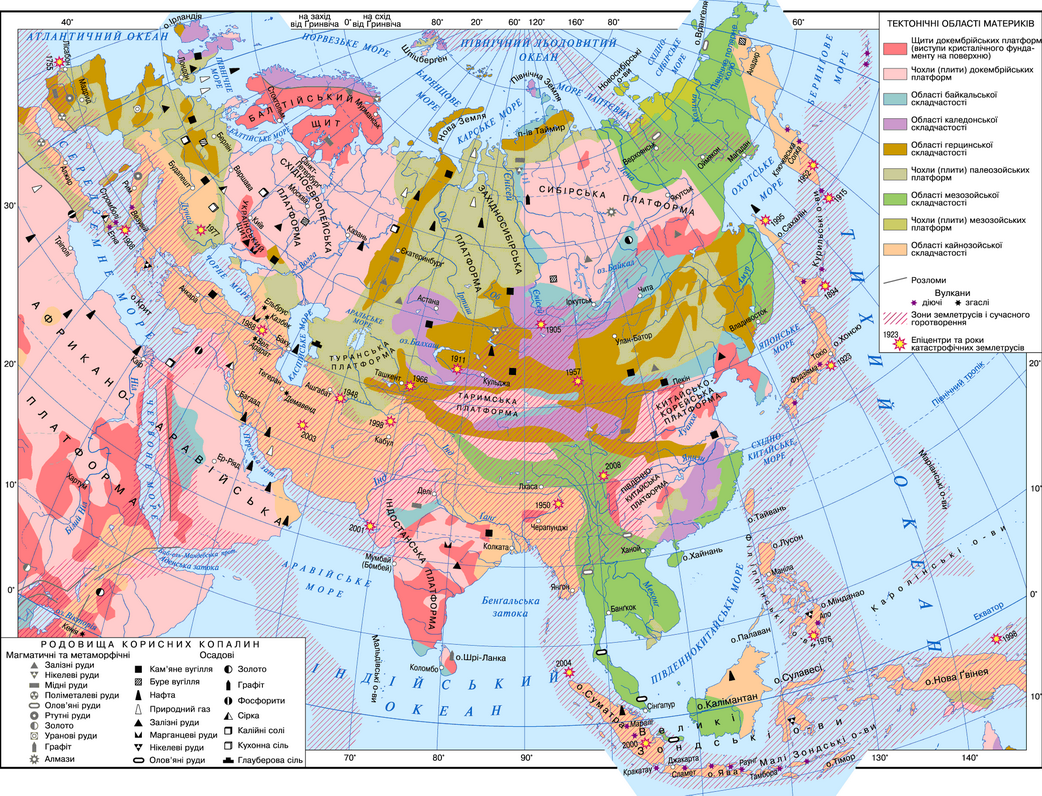 1.     What is lithospheric plates Eurasia?

2.     Name the old and young age platform underlying the mainland.

4.     Which places have the field young folding?

5.     In which areas of Eurasia lay seismic zone? Name the active volcano within them.

6.     What are minerals formed on the platforms? What they originate?

Relief. Complicated geological structure of the mainland affected by his relief. Compared with other mainlands surface Eurasia most contrast: there are at highest Earth's mountains and highlands (Himalayas, Tibet) and the deepest depression land (hollow Dead Sea). In the Eurasian plains, plateaus and mountains occupy approximately equal area.

The lowest place on land on Earth - the Dead depression Sea, which is an absolute benchmark -397 m. The cave is a continuation of Rift faults East Africa.

Mountains Eurasia occurred horotvorennya different era, so have different height and shape of surfaces. Through the whole continent from west to east the longest stretches of the planet zone of young folded mountains - the Pyrenees, Alps, Apennines, Carpathians, Crimea, Caucasus, Himalayas, Tibet Plateau. They formed in the last Alpine horotvorennya era, so usually high and powerful, with steep slopes and sharp peaks-peaks.

Alps - The largest and highest mountain system in Europe. Their sharp ridges rise to a height of over 4 000 m, and highest peak G. Blanc reaches 4 807 m. Pyrenees more parallel high ridges of snow-capped peaks extend for Iberian Peninsula. Serednovysoki   Apenninesacross all the Apennine peninsula. They are compiled by various mountain breeds, so have both pointed and rounded tops. Carpathians as is serednovysokymy mountains. They are drawn not very resistant to destruction by mountain rocks (sandstones, shales, limestones), so their tops are rounded contours, and slopes cut by river valleys. Ridges Crimean mountains extend to three parallel strands along the southern coast of Crimea. They have stolopodibni aligned summit called jajly.

Caucasus Mountains located between the Black and Caspian Sea. Their ranges towering cones of extinct volcanoes - Elbrus and Kazbek. Stately and unavailable Himalayas - The highest mountain system of the world. Their highest top, as you already know, there are Mountain DzhomolungmaThat snow-covered pyramid rises to a height of 8850 m. North of lies upland Tibet- A combination of high flat plains (5000 m high) and very high (up to 7000 m) mountain ranges. It is raised with the Himalayas and reached the record for Plateau height.

Mountains Tien Shantoo old and eventually were destroyed. However, while these are horotvoren rose again. So now they are very high, their slopes are steep, and flat tops. These mountains are called renewed.

Names of mountains in the translation of different languages have roughly the same value. Compare: Alps – high mountains, Tien Shan – Celestial Mountains, Pyrenees – top, Carpathians – rock, Ural – height;  Caucasus – snow-white mountain  Himalayas – snow home. World's highest mountain - top Himalayas, located on the border of Nepal and China, called nepaltsi Sagarmatha – Lord of heavenAnd the Tibetans - Dzhomolungma – Goddess mother of the world. Interestingly, locals adored this summit, not even knowing it - the highest in Earth. This is mankind found out only in 1852, when workers topographic Service India identified its height. They gave her the name and Everest in honor of George Mount EverestWhich led topographic Office. 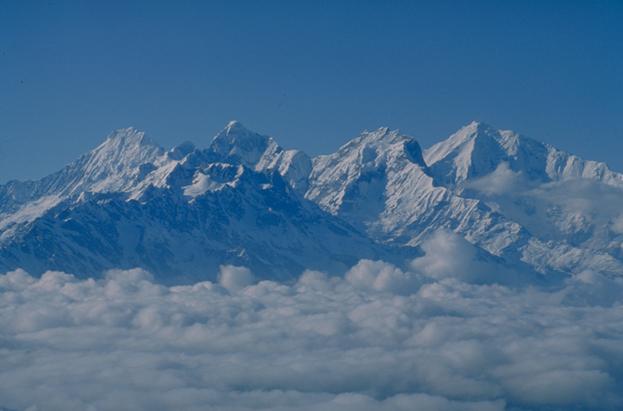 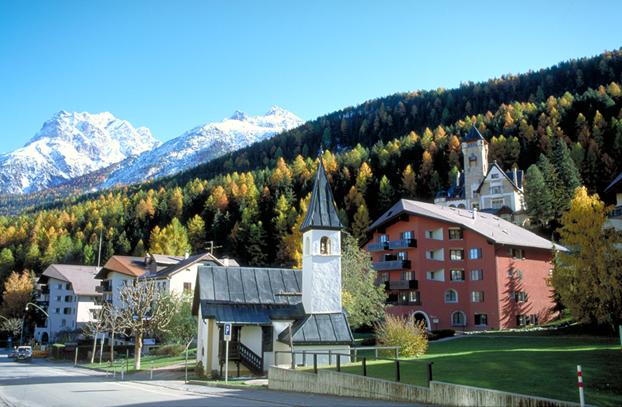 Fig. In the Swiss Alps 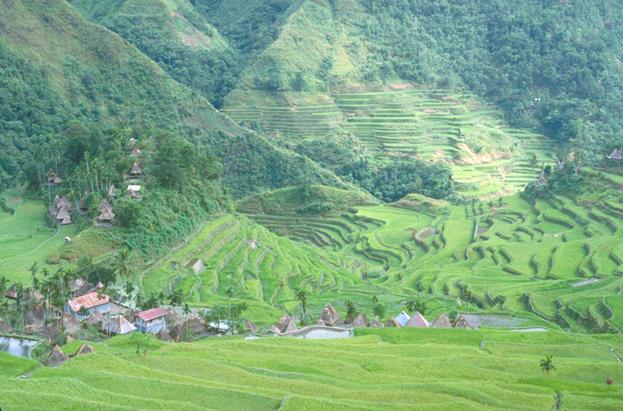 Fig. Settlement on the volcano. Indonesia

1.      Name the largest plains of Eurasia. Compare them an area the size of the plains on other continents.

2.      What mountains rise within Alpine-Himalayan fold belt? Which ones are the highest?

4.      Compare the height of the Alps, Carpathians, Caucasus and Tien Shan. Name the mountains in ascending order of their height.

Minerals. Complicated geological structure caused the mainland its great variety of minerals. On the vast territory of Eurasia is all types of minerals that exist in nature. However, they appear unevenly. Their occurrence is traced the same pattern as that of the other continents - the connection with the relief and conditions of its formation. Yes, deposits various ores associated with magmatic speciesBecause placed in their places of the Earth's surface (billboards). In the rich ores of different metals and mountains.

1. Describe the geological structure of Eurasia.

2. In which areas of the geological point of view emerged fold belt?

4. Give examples of an ancient line of Great Plains young or platforms.

5. In which areas of Eurasia occurred ancient glaciation? As it affected the formation of forms of relief?