1.     Remember how the amount of solar energy received by the surface, moving north.

Number of Solar EnergyReceived by the Earth surface, decreases from the equator to poles. Due to a significant extent of Eurasia from north to south, the Arctic Islands and northern areas of the mainland get three times less solar energy than south. It causes large differences in air temperature. For example, if average January temperature in the Arctic Islands  is -30 0C, then in the Arabian Peninsula it is  25 0C. The lowest temperature to -71 0C in were reported in mainland locality OjmjakonThat in the northeast of Eurasia. It is called Cold pole whole Northern Hemisphere.

The circulation of air masses determine the dominant air masses and winds. As vast territory of Eurasia is located in all climatic zones of North hemisphere, its climate shaped by the cold and dry Arctic, marine and continental moderate, Always hot and dry Tropical, hot and humid equatorial air masses.

Over much of the mainland, which lies in a moderate climatic zone, blowing permanent west winds. They carry moist maritime air mass that formed over the Atlantic Ocean on mainland. However, the influence of Atlantic air masses is felt mostly in Europe. With promotion to the east, deep into Eurasia, is their transformation - Transformation, change properties: they are converted from wet to dry, with warm winter - on cold, with cool summer - the hot. In eastern and southern Eurasia blow monsoon, arising from differences in atmospheric pressure over the ocean and land. Winter monsoon that blows from the land, creates a warm, dry weather with weak winds. Summer monsoon that blows from the ocean, forming the hot and humid weather. He blows much stronger bearing on the mainland storms, stormy winds and a large number precipitation. Therefore, the greatest number - over 1000 mm per year - falls exactly on south of the mainland. Different parts ateryka m under the influence of cyclones and anticyclones.

Topographic effect on the movement of air masses as significant. Mountains - Alps, Caucasus, Himalayas, which stretch from west to east - not allow to penetrate southward cold air masses. In addition, their windward slopes down too much rain. Thus, at the foot South Eastern Himalayas, which stand in the way of the monsoon, blowing from the ocean, nayvolohishyh located one of the places on the globe - the village Cherapundzhi. In average falls there each year about 12 000 mm of precipitation, and maximum number that was registered, was more than 23 000 mm per year. 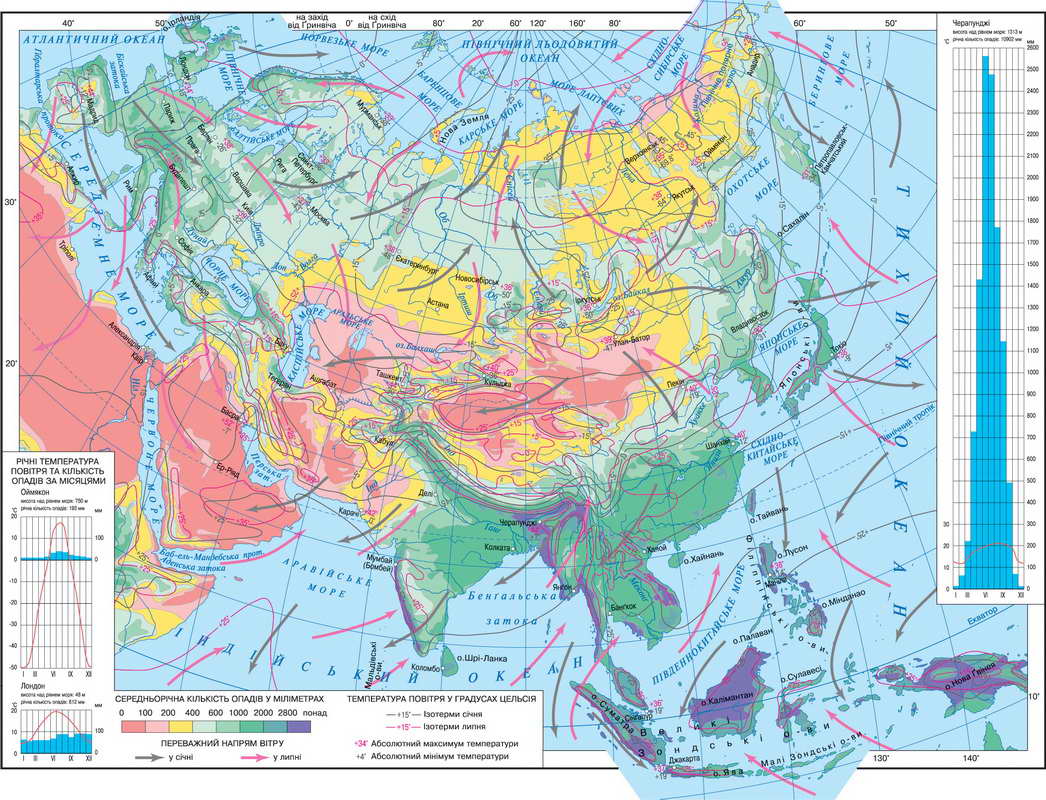 1.     Set the changing temperature for territory of the mainland in the direction from north to south.

2.     Where observed the highest temperature?

3.     As distributed in Eurasia Air? Where down to the smallest number, and where - the largest?

4.     What winds prevail in the temperate zone?

5.     Under the influence of winds which are the southern and eastern coast of the mainland?

Climatic zones TYPES AND CLIMATE. Eurasia lies within all Northern hemisphere climatic zones - from the Arctic to equatorial.

Arctic climate zone includes the islands of Arctic Ocean and the northern coast of Asia. All year round there are rulers and cold dry Arctic air masses. They cause the low temperature throughout the year. Because severe winter and summer cold. The rainfall is small - 250 mm per year. Subarctic climatic zone narrow stretches zone in the north through the whole continent. In the winter of the north-eastern winds here Arctic air coming  mass, summer west winds bring mild air masses. Winter is cold, especially in Asia, where the lowest temperature observed throughout the Northern Hemisphere. Summer warmer than the frigid zone.

Temperate zone covers large expanses Eurasia. Throughout the year they formed a moderate air masses. Through considerable length zone and the rule of westerly winds, there is evident Climate change types from west to east. Therefore, within the temperate zone produce four climatic region. The event, due to air masses from the Atlantic Ocean, winters mild with an average air temperature above 0 0C, summer of 10 0P. 18 0S. rainfall much - More than 1 000 mm per year. In winter it is often mist, fog long held, and summer weather cloudy, gloomy. It region maritime temperate climate.

Further east, up to the Ural Mountains formed temperate continental Climate. Here the influence of the Atlantic gradually getting weaker. Winter cold and frosty, summer warm. The weather is changeable, there are winter thaw and summer rains often. By Urals, in Central and Central Asia, dominated continental moderate air masses. Vyholodzhena winter surface air cools to -50 0S. In summer, on the contrary, the surface heats the air to very high temperatures. Atlantic air mass rain here almost not convey. So little snow in winter surface and freeze for a considerable depth. It is formed moderate continental type climate. In the east zone is climate moderate monsoon of dry cold winters, warm summers and wet.

Subtropical climatic zone stretching from Southern Europe to East Asia. There, as in the temperate zone, there is change climate from west to east. In southern Europe subtropical Mediterranean-type climate. Winter, shows the influence of moist Atlantic air masses, so very cold (Temperature higher than 0 0C) and rains. Summer with the arrival of tropical weight of dry hot weather set. Humidity decreases promotion to the east and in central zone climate already subtropical continental. Winter enough cold and summers hot. Precipitation little. Wind raises dust in the air and sand.

To the east in winter on the Pacific coast of internal parts of the continent is cold dry continental air and the temperature may decline to 0 0C. In summer the same air masses from the ocean create dense clouds, and rain poured continually flows. Rivers overflow with water and leave the coast. It features subtropical monsoonal Climate.

Tropical climatic zone has to reach a solid mainland. It covers only the western part of South Asia. In Eurasia, in these latitudes have a single place on Earth where near are two transitional zones: subtropical and subekvatorialnyy. In the tropical zone, where dry year-round rules continental air, clouds almost never. The result is high temperature and a handful of rain (up to 100 mm per year). In summer and autumn over the Pacific Ocean arise typhoons (From the Chinese "tai Finnish - big wind). It tropical cyclone storm strength. They cause heavy rains, floods and large destruction.

Equatorial climatic zone covers only peninsulas and islands in the south of the mainland. Hot and humid equatorial air masses causing high temperatures and abundant rains throughout the year.

Eurasia lies in the same climatic zones, which North America. However, the formation of its climate are much stronger impact monsoon. 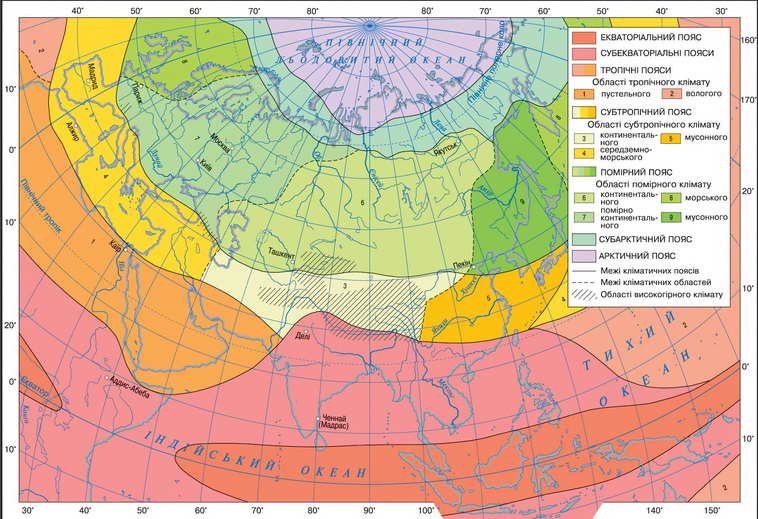 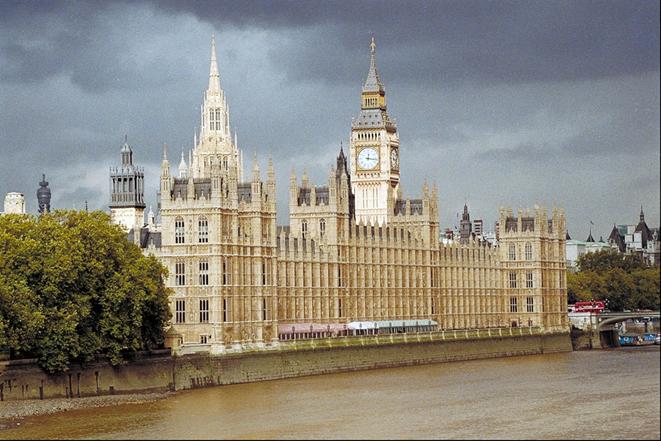 Fig. Overcast - a common phenomenon for the British capital

2.     In which direction is a change of climate zones in Eurasia? How is this explained?

3.     Which of climatic zones is the largest area?

4.     Name climatic region, which formed in within the temperate climatic zone.

5.     What are the features reach tropical climatic zone?

2. How changes in climate temperate climatic zone with distance from the Atlantic Ocean?

3. What is the impact on the climate of Eurasia provides relief?

5. As indicated by the formation of climatic characteristics influence ocean currents?

1.     Analyze the climate map and climate chart of cities.

3.     Explain the causes of climate change within the same climatic zone.