2.     What are the components of nature change with height?

High growth of trees in the mountains prevent strong winds, sharp fluctuations in air temperature and short warm season. Therefore, at an altitude of more than 2 Located 000 m subalpine meadows. In their vegetation dominated by tall perennial grasses. Among them occur overgrowth Juniper and rhododendron, which has large bright red flowers, lilac, yellow or white. Common woodland of pine, whose branches pressed winds to the ground. Located above the subalpine alpine meadows - Zone undersized plants that have bright flowers. Even higher in cold climates may survive only  mosses and lichens on the rocky speeches. At the edge of the snow line is growing edelweiss - May’herbaceous plant, which has beautiful snow-white flowers in a multibeam star. By ability to withstand cold alpine and fierce winds, the plant is symbol of courage and endurance. At an altitude of 3000 m in the snow line lies zone snow and glaciers.

Mountain ranges of the Alps became refuge for many animals, driven out the man from the plains and low mountain areas. Many winter live in the forest belt, and rose higher in the summer alpine meadows. Rocky slopes easily overcome roe and mountain goat. To mountainous adapted marmot. Many birds - crow, jackdaw, swallow tit, a woodpecker. In mountain streams of fish, among which the most prized trout.

The lower zone of the Alps most populated, so it is natural vegetation is largely changed. He even called a cultural zone. Alpine meadows used as pastures for cattle. Alpes-most visited by numerous tourists, hunters, sportsmen Mountain Land. So economy of many alpine country is based on tourism and sport. It causes some damage mountainous nature. To restore its conservation forests fauna, and create reserves. One of the largest is Grand Paradise in Italy. 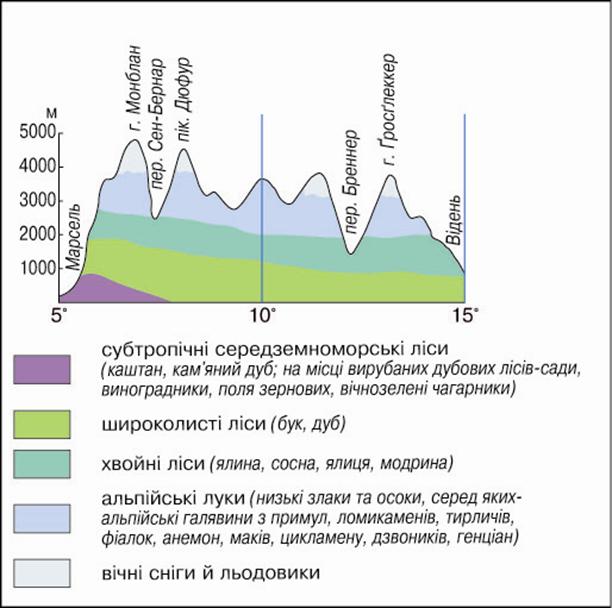 HIGH RISE explain the Himalayas. У Himalayas - the highest mountains of the world - because of their geographical location in subekvatorialnomu and tropical zones and there is a vast high altitude maximum planetary poyasnosti. This means that the rising southern slopes from the foothills to the peaks, you can visit all the natural areas of the world: from wet forests to alpine subekvatorialnyh tundra.

Yes at the foot of twhere am plain changes in the foothills, extending zone subekvatorialnyh evergreen swampy jungle – tera. In this zone grow palm trees mimosa, banana, creepers intertwined. Grasses reach a height of 5 m. In the jungle encounter such large animals like elephants, rhinos, buffalos. In many forest monkeys. With predators encounter tigers and leopards. Once in tera were widespread lakes and swamps infested malarial mosquitoes. They are now mostly drained.

Above the jungle to a height of 1200 m is located zone evergreen Rainforest, Which grows Salov tree, threaded ferns, bamboo and numerous lianas. His changes zone subtropical forests with evergreen (pine, oak) and deciduous (magnolia, maple, chestnut) trees. On altitudes above 2000 m dominated platyphyllous forests of temperate with oak, maple, chestnut, which go into coniferous  Forests of silver fir, Himalayan spruce, larch. Undergrowth form dense thickets rhododendrons. The upper limit of the forest is at an altitude 3500 m.

High rozridzhuyutsya forests and changing subalpine zone with vysokotravnymy grasslands and shrubs of juniper and rhododendron. Above them located alpine meadowsWhere Primrose, anemones, poppies create colorful May’wooden carpets. On marks  5500 - 6000 m runs snow line, which - Zone of eternal snows and glaciers.. Thus, No mountain in the world do not have the enormous contrasts of landscapes of the Himalayas.

In the Himalayas in the upper zones meets black Asiatic black bear, which, unlike the brown bear is on your chest black fur white patch in the form of the letter V. Up to 5 000 m rises Snow Leopard, which has a very nice fluffy fur. In the highlands is found as thick and long hair which can withstand severe cold. Musk deer (musk deer), wild mountain sheep and goats are able to overcome rocky steep ledges. Pervasive and rodents, especially pidkoryshnyky. Many birds, including pheasant danfe, wild turkey snowcock.

Most mastered person is foothills and the middle stripe southern slopes of the Himalayas, are favorable for life. There are settlements, the roads. In the valleys of the cultivated rice on the slopes of citrus and tea bush. In the highlands bred sheep and yaks (Fig.). Above 4500 m resident population anymore. 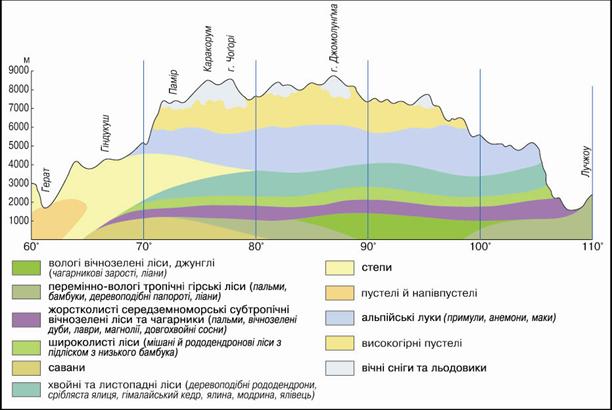 ENVIRONMENTAL PROBLEMS AND Wildlife Management. In the mountains of Eurasia extremely acute problem of deforestation. Thus, the forest in the Himalayas has always been to public source of fuel. In addition, it fired at new areas of cities. Destruction of forests to local needs more or less offset by natural increments until the Himalayas have not become the tourist center. Enough about 30 years to destroy almost all forests near Dzhomolungma. It was just a break integrity of the mountains, and they punished people collapses and landslides. There were even such scary predictions: if the forests on the slopes of the mountains will continue vyrubuvatysya, it soon Himalaya simply will slip down, destroying everything in its path. Good people time to understand their mistakes. Currently, the Himalayan countries have programs with afforestation of slopes. Influx of tourists and mountaineers who want to enjoy the beauty mountains and try your skills at climbing to the top unfortunately leads to environmental pollution.

1. Why a show in the mountains changing soil and vegetation?

2. Why not in the Alps mountain zone of tropical evergreen forests?

3. How much higher than the Himalayas Alps? Using fig .. from. .. describe the changes in high-altitude zones Himalayas.

4. As human activities affected the nature of mountains?

5. In Altitude Himalayas explain before all high-altitude zones of the Earth. No mountain in the world do not have such a diversity of landscapes. Consider that two major factors resulted in this planetary maximum.