2.     As environmental conditions affect the formation of racial people?

RACIAL COMPOSITION OF THE POPULATION. In Eurasia, there were cells ancient civilizations - on the Mediterranean coast, between the rivers Tigris and Euphrates, India and China. Currently residing on the mainland, 2 / 3 of the population of the earth world - more than 4 billion people.

NATIONAL Composition of the population. National composition of population Eurasia very complicated. This is due to centuries under the Migration time conquests and internecine wars.

The main features of a nation is the common area of residence and language. Linguistic characteristics of the population belongs to the Eurasian different linguistic groups, united in a language family. One of the largest is Indo-European language family. In Europe it belongs to the people Slavic language group – Ukrainian, Russians, Belarusians, Poles and others. These languages many similar words have much in common and in culture. To the people Germanic Groups are Germans, Englishmen, Swedes, NorwegiansAnd to Romance  – French, Italians, Spaniards, Romanians, Moldovans. In Asian languages indoiranskoyi groupspeak hindustantsi, Persians, Afghans.

Dominant religion in Europe is Christianity. In Asia, together with Christianity spread Islam (Islam), Hinduism, Buddhism. 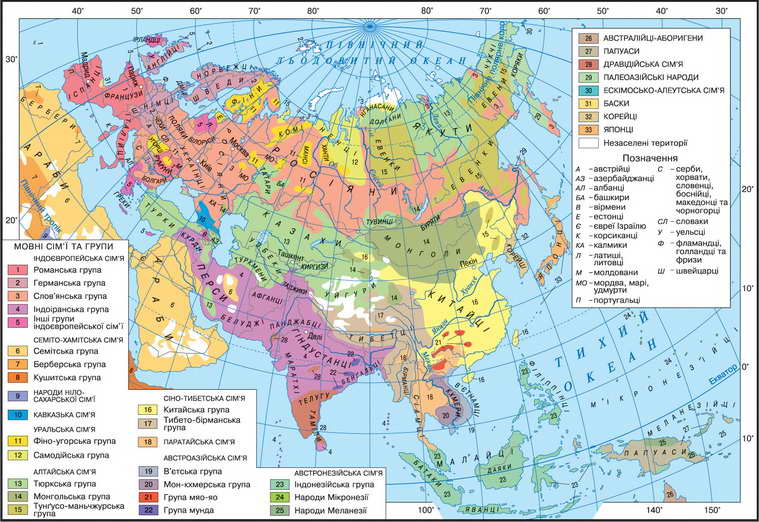 Fig. The peoples of Eurasia

1.     What are peoples inhabiting Europe?

2.     In which part of the continent focused people who indoiranskoyi belonging to linguistic groups?

5.     What are peoples inhabiting Asia?

7.     The people whose linguistic groups inhabiting the peninsula of Hindustan?

Population distribution. In a vast and diverse Eurasia population is very unevenly placed. In Europe, the Unlike Asia, there is no low-populated or unpopulated areas. Majority Europeans (70%) live in cities. Some of steadily proliferating, merge with the suburbs and form a continuous urban sprawl. In Asia it there are great contrasts and under natural conditions, population. In some areas (valleys of major rivers, coastal lowlands, Japanese Islands) population density is very high and sometimes reaches 1500 persons per 1 km2. Very high population density in cities. In others, the same regions (Tibet, deserts) population density is 2 persons per 1 km2 they do or deserted.

Today in Eurasia are more states than any other continent. Countries differ from one another their geographical location, size of territory, natural conditions, people who inhabit them, the level of economic development.

The largest in Eurasia is Russia, China, India. However, in Europe there are States "dwarfs" who are a tiny territory, and the number of their population can be compared with the number of residents. For example, Vatican covers 0.44 km2, Monaco - 2 km2, San Marino - 60.6 miles2. Many Countries placed on the islands - Great Britain, Ireland, Iceland, Japan, Philippines, Indonesia et al. The largest population are Asian: China, India, Indonesia.

Of the seven countries worldwide that have achieved the highest level economic development, five are located in Eurasia: Germany, Britain, France, Italy, Japan. These countries are world leaders in many sectors of the economy. In Asia, most countries belong to the group countries developing. 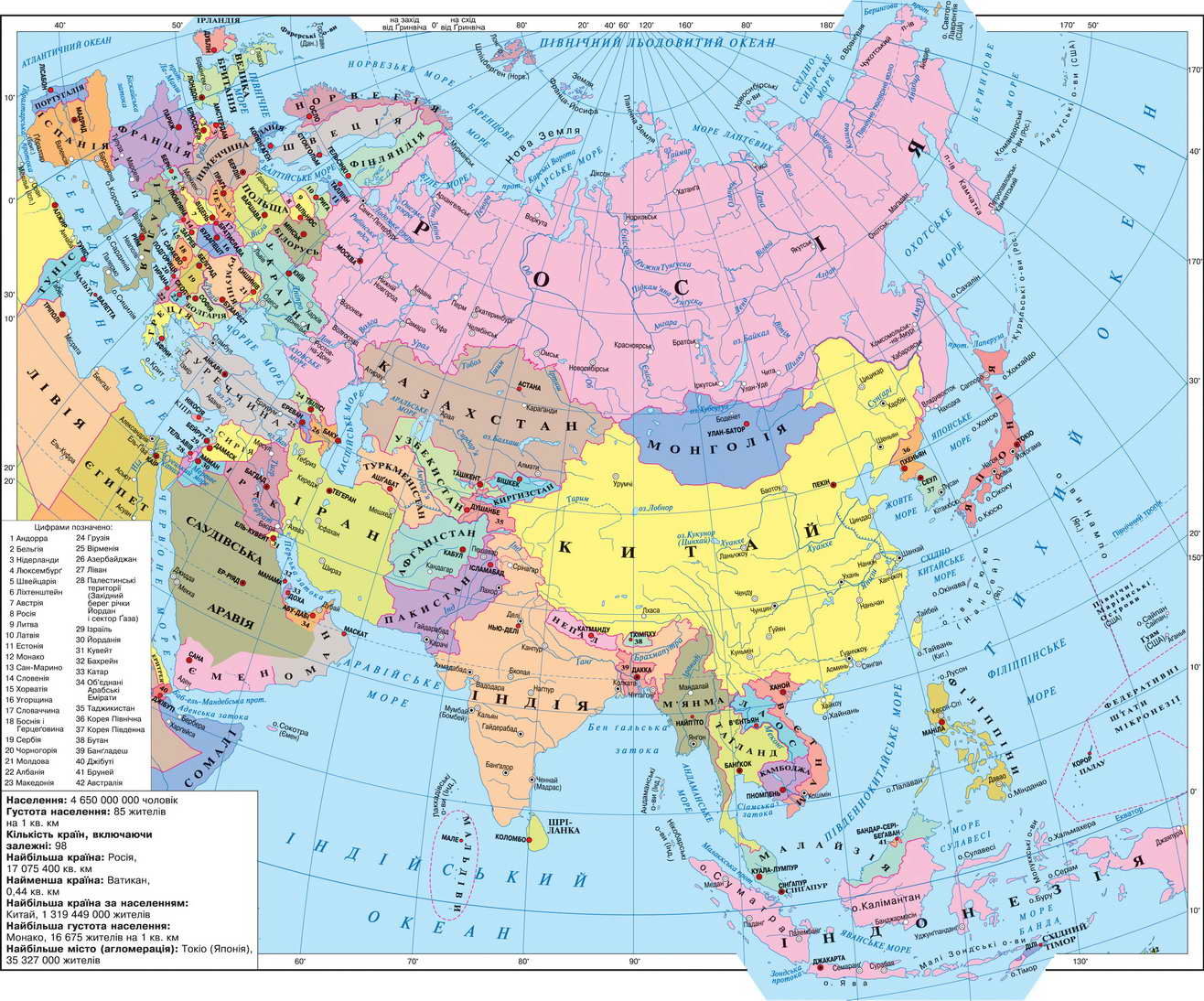 Fig. The political map of Eurasia

1. Tell us about the racial composition Eurasian populations.

2. Which language family and language group includes the Ukrainian people?

3. Give examples of countries where population spoke Slavic languages.

4. Why do people in Asia placed very unevenly?

What is different state on the political map of Eurasia?