In the southern part of Asia is IndiaWhich has a wide outlet to the ocean and alpine country Butane and NepalWhich lie in the Himalayas and distant from the ocean.

INDIA. India - one of the largest by area of the world. It occupies Hindustan peninsula and adjacent mainland. Its coasts washed Indian Ocean. In the past, India was a colony UKAnd now it is rapidly developing economy, making research even in space.

Nature combines features of lowland and mountain scenery. Plains - Deccan Plateau and fertile Indo-Hanhska lowland - Are more part of the country. In the north rise the highest mountains of the Earth - Himalayas. They formed a junction of two lithospheric plates, so now there are earthquakes. India - one of the hottest countries. Indians say: "We have nine months of the year hot, and the remaining 3 very hot. " There reigns subekvatorialnyy monsoon climate. So Indian year is divided into two seasons - dry winter and humid summer. During the summer months when the monsoon blows from the ocean, down 80% of annual precipitation. Most - in the Himalayan foothills. There's Village Cherapundzhi nayvolohishe is place around the globe. But so moisture does not everywhere - in the west, where the climate is arid, barren lies Thar Desert.

The major rivers of India - Indus, Ganges, Brahmaputra - Have mostly rainy power. Therefore, rainy season the water level in them rises a few meters. Often it leads to severe flooding. Indian proverb says: "At the River live - all year mayatysya. High water in a few days can make flowering field on a continuous sea.

Once in India there were many variables, moist forests. Now they cut down, and in their place have savannas. Once many animals have become rare, others - pryzvychayilysya live together with people. Especially popular monkeys, who live not only in forests but also in towns and causing large damage to orchards and kitchen gardens. Immemorial in India pryruchaly wild elephants. These giants carrying cargo and performing other heavy labor in the household.

By number populationIndia ranks second in the world after China. Today, the population continues to grow rapidly. This in turn leads to lack of food, so many people living below the poverty line. The composition of the population very colorful - people belonging to different races and ethnic groups. India considered the most multinational country in the world. Her people say hundreds of languages and dialects. The official languages are Hindi and English. Majority population professes Hinduism - ancient religion, which worships a large number of gods. Average high population density - 300 persons / km2. However, placed it is uneven: the Himalayas in the highlands - only 2 persons / km2And in Indus Valley and Ganges - more than 500 persons / km2. In India, most population lives in villages. Top cities - Delhi, Kolkata, Bombay.

У economy of the country's leading role plays no industry, and Agriculture Industry. Traditionally, the crop developed. In well-watered valleys rivers grow dank rice, bringing two or three harvests a year. Important crops are wheat, millet, maize. Peanut - peanut - grown as oilseeds. Many pick cotton and sugarcane. India has the world's largest jute cultivation area. In the foothills and on the terraced slopes Himalayas cultivated tea bush. The famous Indian tea, which has more than 300 varieties, known throughout the world. Various spices - black pepper, ginger, cloves, cardamom, which centuries ago from Europe sporyadzhaly ships the long and fantastic India, now sold worldwide. India - world leader in growing mangoes and bananas. In India more than in any other country cattle. However, meat religion prohibiting eating, and cow is considered sacred animals.

India is the world's largest reserves of mica - minerals as a wisp of plates. Mica is not heated (a high heat resistance) and blocks electrical current. Because parts are made of mica, have received wide application in electronics and radio engineering. 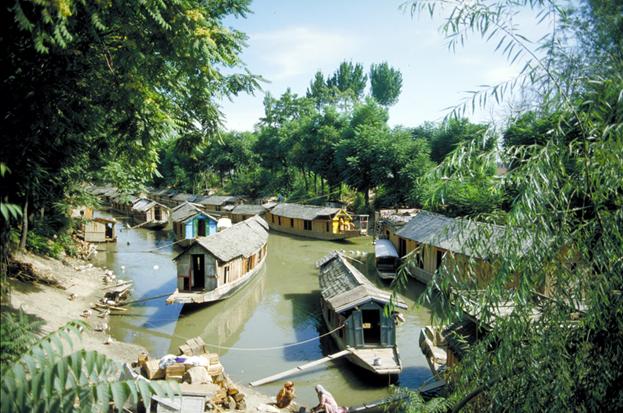 Fig. Settlement on the water. India

Nepal. If you look at the map, then Nepal seems to be a small area. But                                                                             so it seems only because he caught such giants as India and China. Nepal called for the country sealed off. Neither that it is extremely remote from the world, such as Oceania, and the because it lies at a considerable height, surrounded by the world's highest mountains. Roztashovuyuchys on the southern slopes of Himalayas, Nepal is one of the most high-altitude countries: 6 / 7 of its territory is occupied maze of mountain ridges. Therefore he, unlike neighboring India, has never been a draw colony. Lost in Himalayas kingdom is enigmatic and mysterious image of a country that even today continues to live the life of the Middle Ages.

Mountains - A card of Nepal. Himalayan ranges giant stairs rise from south to north. From 14 vosmytysyachnykiv planet 8 are in Nepal. Among them is climbing pole of the planet - Mountain Dzhomolungma (8 850 m), located on the border with China. At the foot of the Himalayas narrow strip tera line - from plain swamped jungle.

Nepal stretches from south to north is only 250 km, and the difference in height fluctuations reaches 8600 m. Therefore, кlimat observed a high diversity of small spaces: from subekvatorialnoho monsoonal foot to cold (arctic analogue) in highlands. In the country of banana trees and the north bank of almost neighbors, and snow leopard lives near the places where tigers and rhinos are found. In Himalayas, as you already know, there is the greatest variety of high-rise zones. Snow line is at an altitude of 4-5 thousand meters, so many top snow and ice. Below the snow line in spring RiverAcross the Himalayas and traveling to the plain. Most of them are steep, turbulent flow in the deep gorges and challenging rapids. The state studied enough.

Ethnic population,that in India, very colorful. The nations belonging to the european and Mongoloid races (Fig.). Nepal - rural country: 95% of its residents live in villages. Bridge bit. The largest is the capital - Kathmandu, that has all the features of a typical Asian city: narrow streets, crowded dirt, among which many traders and holy cow - it reminds live illustrate historical books about the Middle Ages. However, not all points to ancient times, Travel offers  featuring modern conveniences. Nepal - Country sincere believers. Hinduism, which profess 90% of the population, заdeclared State religion. Interestingly, a part of it supporters is much higher here than in India. Followers of Buddhism is 5%.

Nepal, called the tourist paradise - one with world's poorest countries with malorozvynutym economy. Isolation from the world contributed to long-term storage there feudal system and the survivals. By 1950 the country was not a single roads, and the first car porters in baskets brought by parts with India.

Agriculture Industry, which plays a major role in the economy, backward and unproductive. It based on manual labor and primitive technology. In mizhhirnyh valleys with fertile nepaltsi soils cultivated rice, maize, wheat, soybeans. Important technical crops are jute and sugar cane. In the highlands suitable for farming only a few small areas on rocky ledges. Growing crops, mostly potatoes and barley, there is possible to altitude 4000 m. Nepaltsi bred cows and sheep, and in the highlands - yaks. Jaki is a beautiful horse-drawn animalsfor transportationWith their wool weave mats and carpets, oil lamps burned in sacrifices and in the monasteries homes.

No reform could not do that in a short time made in Nepal tourist business. State Government takes a considerable fee for climbing on Himalayan peaks. Serving visitors, which allows for considerable Nepalese standards, income was the main occupation of local people. So tourism and mountain climbing are the main source of income in the country.

Sky top of the Himalayas - the place practically inaccessible for humans. Few dare-desperate climbers can ascend to such elevation. The first attempt to climb Dzhomolunhmu people did in 1921 It took 32 more years of bitter experience in 1913 and unsuccessful expeditions to first climb Mount Everest. In 1953 it made a New Zealand mountaineer Edmund Hillary and Norgay Nepalese Tensinh. In 1999 he went to Everest  Ukrainian Vassily climbers Kopytko (Odessa) Vladimir Gorbach (Kyiv) and Vladislav Terzeul (Kharkiv).

Rivers with monsoon downpours constantly eroding ground cover on slopes. Annually Nepal because of erosion and landslides are losing thousands of hectares of fertile land, and mountain streams wash their thousand cubic meters of soil in the Ganges. So wash away the land becomes subject to Nepalese exports.

In Nepal, tourists must strictly adhere Government established the rules of purity support Himalayas. In particular, travelers all that brought in the mountains - canning cans, packaging of products waste batteries and other debris - should take with them down. For preserve its unique nature created 14 national parks.

1. What are the features economy of India?

3. What factors do you think cause retardation of Nepal?

4. As environmental conditions affected on agriculture, livestock  and other sectors of the economy of Nepal?