1.     Remember that natural areas are common in northern Eurasia.

2.     Where the conventional boundary between Europe and Asia?

GEOGRAPHICAL PROVISIONS. Russia - The largest state in the world. It crosses 10 time zones, borders 14 countries, bordering the seas of three oceans - Atlantic, Arctic and Pacific. Wide outlet to the ocean possible to use them water spaces and connections as a source of various resources. Russia placed in two parts of the world - Europeand AsiaTherefore, it is the Eurasian country.

NATURAL CONDITIONS. Nature Russia, which stretches for as thousands of kilometers from north to south and from west to east, very diverse. European part of Russia, Stretching from its western borders to Urals, Flat. It is a vast Eastern European plain. Further east Asian part starts - Siberia and Far East. Vast spaces Siberia just lie on the plains - West- and Serednosybirskomu plateau. In southern limit of their mountains Altai і Sayan. On Far East dominated by mountains.

The climate of Russia is a contrast: from the harsh arctic on Far North to the hot and dry desert on the coast of the Caspian sea and the monsoonal wet in the Far East. Surprisingly there are various soils and vegetation. Significant areas of Russia's forest cover. On its territory flowing large rivers of the world - Volga Ob, Yenisei, LenaUsed as connections  and for electricity. There are large Lake: Caspian Sea, Baikal, Ladoga. In many parts of Siberia and Far East widespread permafrost.

POPULATION. With a population of Russia ranked 6 th in the world. This multi-country, home Representatives of more than 100 different nations and ethnic groups. However, the vast the majority are Russians (82%). Among the many Ukrainian national minorities. The territory of the population is very unevenly placed. The majority (2 / 3) residing in European countries with favorable natural conditions. Significantly lower population density in the Asian part, where there is sharp continental climate. Most of the population lives in cities. The largest cities are Moscow, St. Petersburg, Novosibirsk. 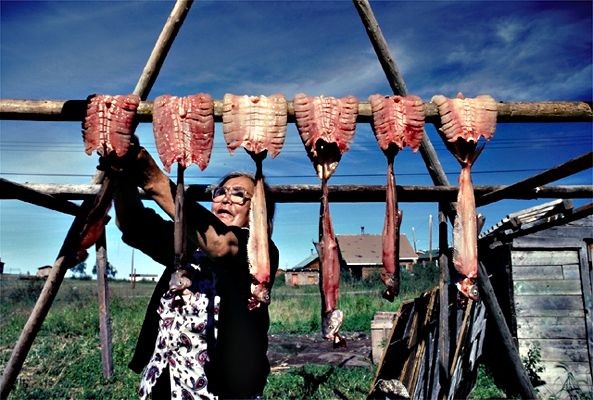 AGRICULTURE. Powerful industry Industry is mining. It develop large deposits of natural gas and oil (Western Siberia between Volga та Urals) For the extraction of which Russia is one with world leaders. The country has significant deposits of coal (Kuznetsk, Pechora basin) Iron (Kursk magnetic anomaly, Ural) and manganese ores. So, metallurgy own fully equipped raw material and one of the world's largest producers of iron and steel. Industries non-ferrous metals smelted copper, aluminum, nickel, lead, zinc, gold and other metals. Electricity generating strong thermal, hydraulic and nuclear power plants.

У agricultureimportant place belongs to livestock feed base that uses different natural areas. Thus, in tundra and lisotundri breeding reindeer, in the plains and semi-deserts - sheep in the Altai mountains - goats and deer Maral, in Buryatia and Tuvi - Jacob. The most common are cattle, pigs and birds. Rivers, lakes and seas catch fish. Plant as diversified. Line-steppe and steppe - the main granary of the country where grown crops: wheat, rye, corn. For technical crops cultivated sunflower, sugar beet, flax. Everywhere plant potatoes and vegetables.

In Russia developed all kinds Transport. The main role railway transport, which carries the greatest volume of cargo and passenger transportation. River transport used in domestic transportation. Marine provides transportation between foreign countries. Major ports - St. Petersburg, Novorossiysk, Murmansk. Due to the huge size of the country especially important to transport aircraft that can travel long distances quickly and achieve remote areas of North and Siberia. Pipelines in length which Russia is second only to U.S. oil and gas transport in Europe. 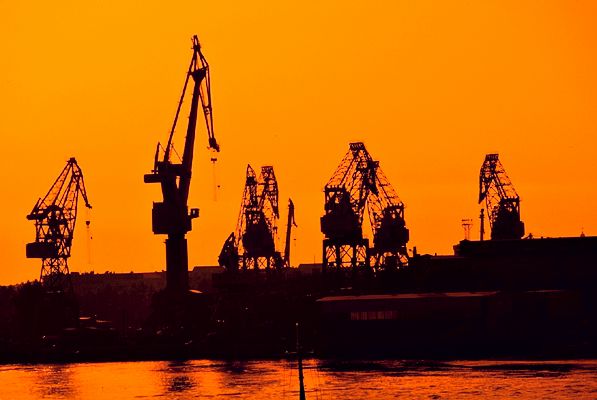 Fig. The seaport in northern Russia

1. Consider what is caused by a large variety environmental conditions of Russia?

2. Tell us about the population of Russia.

3. What factors contribute to the development of various branches of Russian industry?

4. Why, as in no other country, developed in Russia diversified farming?