Age rocks. Already know that зemna crust consists of mountain rocks and minerals of different origin and age. Usually, the deeper of surface rocks are, the more they are older, and layers of rocks that cover the top Earth's surface is the youngest. However, to establish the relative age of rocks at depth occurrence of layers is possible only for those areas where they are deposited in the unbreakable state - As deposited at the bottom of ancient seas. Instead, in the mountain areas are areas where the folds of rocks onto the surrounding area or general inverted.

In such cases, to help geologists to come radiological research method. It is to determine the age of rocks by Time decay of radioactive elements, which must number at least in some contained in them. Tens or hundreds of millions of years of radioactive elements itself, with the same speed decay into other elements (uranium - to Lead and helium). For example, uranium decays into helium and Lead. Then the helium is scattered and Leadremains in the rock. Knowing the decay rate and amount of radioactive substances (uranium) contained in rock and the amount of residue (Pb), One can calculate the absolute age of rocks from the its formation.

Geological structure. Modern surface area Ukraine is covered by younger sediments, formed during the Quaternary (Antropohenovyy) period. Their age, from several dozen to several hundred thousands of years. They are distributed almost continuous depth capacity of an average of 15 m (Maximum 100 m). If you remove the imaginary this thickness, then under it will breed all ages. Their distribution reflects Content geological map Ukraine. To create such maps are not necessary to remove the thick antropohenovyh deposits. On the rocks beneath them can be learn in different ways: drilling wells, quarries or study walls exfoliation (exits rocks on the surface) on the steep river banks.

The oldest sediments in the geological structure Ukraine is PrecambrianThat occur throughout its platform part at different depths, and within the Ukrainian Shield - come to the surface. The most popular among Paleozoic rocks have deposits carboniferous periodWhich fulfill the strong thickness Dnieper-Donets basin and in the Donbass large outcrop solid area. The geological map shows the lack in Ukraine wedging out rock and cambrian ordovytskohoperiods, very little spread Silurian and Devonian (In valleys of the Dniester River and its tributaries on the left tail) and Permian (in Donbass) deposits. Mesozoic sediments deposited in the Donbass and the Crimea mountains. In particular breed Cretaceous period occupy large areas in the west (Volyn, Carpathian Mountains) and north-eastern Ukraine.

Most common in Ukraine is Cainozoic deposits. Paleogene rocks is on the Left Bank, Northeast countries in the Carpathians. Neogene sediments almost entirely covered Black, plain Crimea, skirts, Carpathian and Transcarpathia, take significant areas within the Ukrainian shield and the Dnieper-Donets basin. Quaternary (Antropohenovi) depositsformed mainly on land. Just offshore, coasts and bays, estuaries of the Black and Azov seas, they are of marine origin.

The oldest rocks older than 3.5 billion years detected in Ukraine in the Azov Sea at the foundation platform. Sedimentary rocks are cover the platform started to be formed only 1.75 billion years ago.

On steep rocky banks Dniester River and its tributaries on the left tail can be seen in the context of earth crust: uneven rocks from Precambrian to Cenozoic. Two outcrop there is unique and the World Heritage: near the village.Kitaygorod(GAIN) shows deposits of Proterozoic, Cambrian, Ordovician, Silurian, Cretaceous, and near.Trubchyn(Ternopil), Silurian and Devonian. In the Silurian rocks of many fossilized remnants of plants and animals, aged 400 million years (life time out of water on dry land). Exploring these outcrops humanity gained most knowledge about the Silurian.

Folded building in Donetsk has more than three hundred beds of coal, which alternate layers sandstone, limestone and other rocks. This is due to constant vibrational motion trough in Donetsk: soggy dry with lush tropical vegetation cherhuvavsya the sea, which was loose and accumulation of organic sediments. Nearby Druzhkovka (Donetsk region) in the sandstones are petrified trees with a diameter up to 1 m, which more than 300 million years. In the Paleozoic they were swamp cypresses or Araucaria. 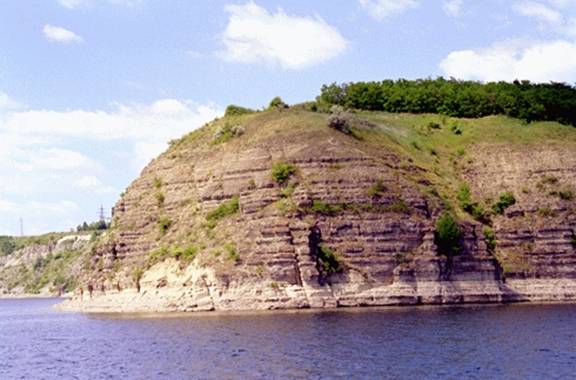 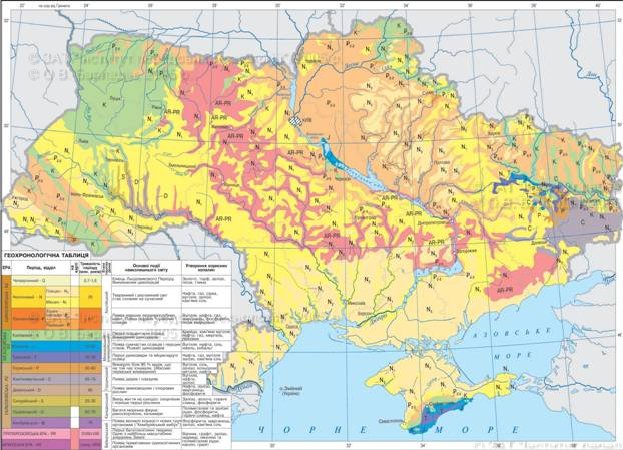 1.     Find out which breed periods do not go on surface of Ukraine.

2.     In which area of carboniferous period deposits occupy a continuous area?

3.     In which area of the Cretaceous period deposits occupy a continuous area?

4.     Sediments are the most common periods for Ukraine?

Ice depositscoating formed by ancient glaciers, which twice attacked the northern territory of Ukraine from Scandinavia. Glaciers and brought before him on a different loose rocks - boulders, sand, sandy, loam, clay. They postponed to edge of glaciers or during their melting as moraine - Cluster nevidsortovanyh rocks.

Вone-glacial sediments (Sand, sandy, loam, clay, gravel) formed as a result of glacial melt waters. Ice and water-glacial deposits are widespread in Polesie and along Dnieper River valley(Approximately Dnepropetrovsk), where it reached one of the gigantic performances Dnieper glaciation.

With a coverage icing also bind origin separate Eolian (wind) deposits. It's said that on the surface of the glacier, which had several hundred meters depth, to the neighboring territory of duly strong winds. They raised the sand and loam and rozviyuvaly them over large areas. Then there accumulated pylevatyh powerful breed thicker yellowish - Lesia. They cover almost 70% of Ukraine and is the foundation of modern soil marked by high fertility (primarily black). 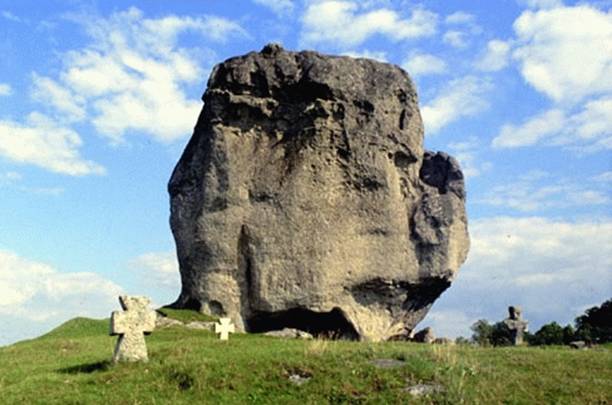 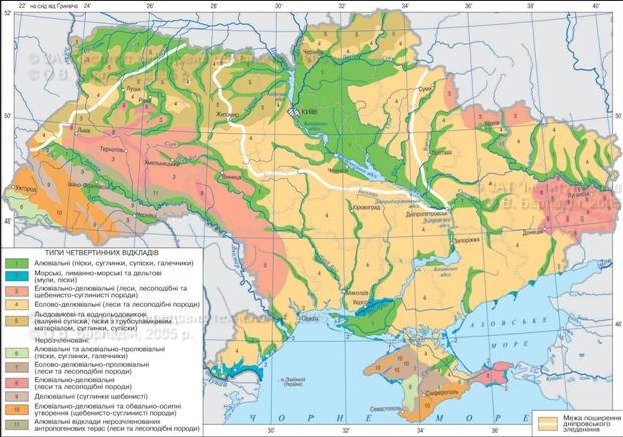 The most common in the geological structure of Ukraine is Precambrian, Paleozoic (especially coal-period), Mesozoic (Including the Cretaceous period) and particularly Cenozoic sediments.

On the geological map of Ukraine shows distribution rocks of different ages who are in the crust thickness in the youngest (Antropohenovyh) deposits.

1. What ways can determine the age of rocks?

2. Breeds of all ages have the largest share in Ukraine under a layer of Quaternary (antropohenovyh) rocks? Where they lie?

3. What is a moraine? As ice formed deposits?

5 *. During explorationdrilling a borehole to the surface was raised different breeds: granite Archean age, age cambrian sandstone, marl Palaeogene age dolomite Permian age, Quaternary sand, clay of Jurassic age. Specify order of occurrence of these species from the surface deep into the subsoil under the condition of inviolability occurrence of layers.