1.     Remember peculiarities of terrain and climate in Ukraine as conditions of road transport.

2.     Where in Ukraine is produced and processed oil?

3.     How and where transit through Ukraine is oil and natural gas?

The total length of highways in Ukraine is 169 thousand km, almost all of them - with hard surface. Prevalence plain relief leads to more or less uniform development of the automobile Meoutlet throughout Ukraine. Highways known ways that per-ensures high bandwidth and speed. Among them are distinguished motorways - roads, with several bands in both direction and have no intersection with other ways to one level. For the length of motorways Ukraine yields to many European countries. Low and quality of roads and service centers, which creates problems in the integration of the Ukrainian into the European transport network.

In the future transport network is more tightly integrate in виsokorozvynutu European communication system. In particular,anticipated construction of the trans-European motorway Kyiv - Madrid. 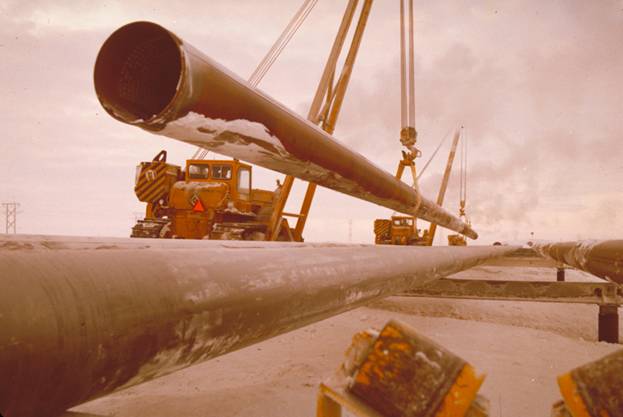 Fig. On the construction pipeline

The first in Ukraine pipeline Dashava - Stry - Drogobych began to move more in 1924 There are domestic pipelines value and transit. Among domestic the largest are: Shebelynka - Kharkov, Shebelynka - Dnipropetrovsk-respiratory exercises - Krivoy Rog - Odessa - Chisinau, Shebelynka - Dikanka - western regions of Ukraine. Among the major transit is gas Soyuz, Urengoy — Pomary - Uzhgorod, "Radiance of the North" et al. All of them are with Russia Ukraine's western borders in Transcarpathia, and more - in the country Central and Western Europe. To Ukraine via Russia gas enters and natural gas from Turkmenistan.

Network oil less dense. Local Oil short they pumped for oil from extraction to refining plants in Kremenchug, Drohobych Nadvornaya. However, most oil in Ukraine comes from Russia Samara pipeline - Lisichansk - Kremenchug - Kherson (With branches in Odessa) Terrible - Lugansk - Lisichansk. In the western part of Ukraine is transeuropean transit oil "Friendship" (From Russia to Central Europe). In 2001, completed Odesa - BrodyOn which are char-ucts and Europe will come Caspian oil.

In Ukraine there is also a number of international product pipelines. Among them ammonia pipeline Togliatti (Russia) - Gorlovka - Odessa, etylenoprovid Kalush - Tisauyvarosh (Hungary). In the long term because's territory Ukraine plans to build large pipelines that takewe can transport oil and gas from Azerbaijan, Iran to own needs and European countries.

Road transport is leader among all modes of transport for carrying passengers and cargo.

For quantitative and quality characteristics of road transport, Ukraine yields many European countries that are creating problems in the integration of the Ukrainian pan-European transport network.

Pipeline transportation Ukraine plays an important role in the national economy and population energy (oil and natural gas), and in supplying these types of fuel from Russia to Central and Western Europe.

1. What features of road transport and that its advantages over other modes of transport?

3. What features of the development pipeline?