1.     Within which natural areas and historic land is the territory of Sumy, Poltava and Kharkiv regions?

2.     What natural resources this area is famous for?

Northeast Economic Region consists of three administrative regions (Sumy, Kharkiv, Poltava) and is one of the largest in its area and average in population among regions of Ukraine. 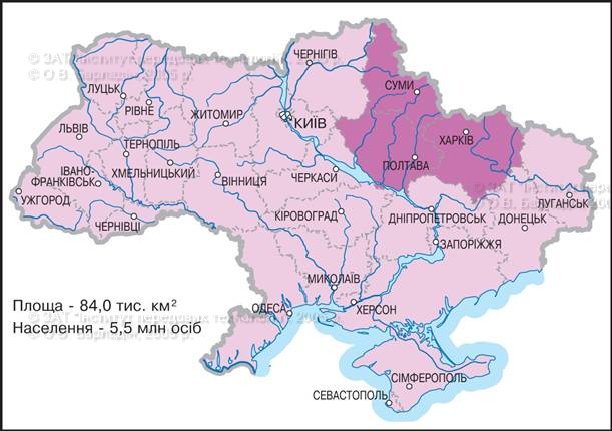 ·   even of settlements in the territory, the presence of large cities, including City-million Kharkov, Concentration it significant scientific and technological potential.

Chemical Industry represented by the production of phosphate fertilizers in Sumac, Chemical Reactivesin ShostkaAnd pharmaceutical products in Kharkiv and Lubnah. Power District are oiland gas production, oil refining in Kremenchuk, TES network (most of them - Zmeevskaya) And Kremenchug GES.

Food industry is developing on local raw materials. Its main areas - sugar, oil, milk and meat - have a broad geography.

Most domestic traffic carried by road in the area, and External - Rail. The biggest railway junctions - Kharkov, Lozova Konotop, Poltava. In River transport is involved in port Kremenchukon the Dnieper.

Through area is crossed by a series of pipelines from Russia (including pipeline from Samara to Kremenchug) and a dense network of local pipelines oil hazopromysliv and to consumers.

INDUSTRIAL CENTERS & Sightseeing. The largest cities of the Northeast District is a regional center Kharkiv, Poltava and AmountsAnd alsoKremenchug. Kharkiv - Historical “capital” Slobozhanshchina - a time was the political capital of Soviet Ukraine. Currently, he claims called industrial “capital” Ukraine in general and engineering in particular.  However, this is one of the largest research and educational centers in the country.

Northeast region - a powerful industrial and agricultural district with a high level of mechanical engineering, a solid scientific and technological base.

2. What industry will determine the economic specialization Northeastern? What factors have caused it?

4. What cultural and historical points of interest is in the North-East economic region?