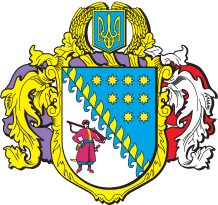 Bridge - 20, including the cities of regional subordination - 13

first traces of "pralyudyny" found here are believed scientists, even before the era of the early Stone Age. Scientists say that it is on the Dnipro 6 thousand years ago were first domesticated horses. In the barrows in the area found Novomoskovsk Four wagons, one of the oldest in Eastern Europe. Among the findings of archaeologists - the world-famous treasures of the ancient Scythians - Tomb of thick pectoral crest of the mound and Soloha.U Middle Ages these lands took possession of the northern boundary of nomads. Dnieper trade route goes through the famous "Varangian of the Greeks. In 972, the Prince Svyatoslav here, near the Dnieper rapids, killed in battle with Pechenegs. Dnipropetrovsk region known as the Cossack Sich - five of them existed in the modern Nikopol area. Inclusion Zaporozhye lands of the Russian Empire and liquidation of the Sich in 1775 accompanied by the emergence in southern Ukraine at first Novorossiyskseries, and later Katerynoslavs'ka provinces of the main city Yekaterynoslav (now Dnipropetrovsk). Big changes in the life of the region related to the opening end of the XIX century. significant mineral resources - coal, iron and manganese ores. At this time Ekaterinoslavskaya province quickly turns into a center of industry in the south of the Russian Empire. Put into operation in 1884 Catherine joined the Donetsk coal railways and Rog ore-mining pools. Laid in the XIX century. based industrial development characterized its modern industrial face.

Floodplain forests of the Dnieper-Oril's'ke Reserve 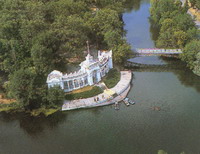 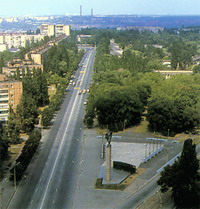