Bridge - 15, including the cities of regional subordination - 7

lies in the northeastern part of Ukraine. The surface area has a general slope to the southwest. East region - the spurs Serednoruskoyi Hills, West - in the Dnieper Lowland (105-120 m). The central part of the region is the accumulative-denudation plain dissected by ravines and gorges. Most of the industrial importance Fossil fuel: petroleum (reserves a third of Ukraine) and natural gas, peat (floodplains of major rivers in the north). There are non-metallic mineral resources: phosphates, potash and rock salt, limestone, marl, mineral paint, plaster, chalk, refractory and refractory clay, construction sand and glass. The climate is continental with relatively cold winters and warm summers. Precipitation - 510-588 mm a year, 60% of falls in the warm season. Region has 165 rivers longer than 10 km, belonging to the Dnieper River Basin. The largest of them: Desna of the Sejm, with Vorskla Vorsklytsya, Sula and its tributaries and Romain Tern, Pse of serum Khorol. Within the region there are many lakes and wetlands, 26 reservoirs and 1188 ponds. Soils predominantly black (53%), gray forest, soddy-podzol - in the north, the flood year - meadow, marsh and meadow marsh. 17.6% of the territory occupied by forests, located mainly in the north. The main species - oak, pine, birch, aspen, alder and ash. Wildlife includes about 355 species including: mammals - 60 birds - 238 fish - 40, amphibians - 10. With adverse natural processes in common: water erosion, suffusion-sagging phenomenon, the formation of gullies and landslides, karst (where there is chalk and marl), mire (in river flood plains and ends of beams), accumulation, deflation (on sandy river terraces). The main directions of improvement of soil fertility - the creation of protective forests. The region - 181 territories and objects protected areas, including national importance: a branch of the natural reserve, national park, 10 nature reserves, 3 natural monuments, dendropark, 2 park monuments of landscape architecture, 2 regional landscape parks, 29 natural reserves.

Since the end of III thousand to BCE. on land Sumshchyna different tribes living of farmers and herdsmen. Archaeological findings of that time belong to Maryanivs'ka culture. In the VIII century. BC. BC Scythians lived here-farmers, and in the VII century. - Slavic tribes Siverianians. In the IX century. Sumy region was part of Kievan Rus, and belonged to Pereiaslav Chernihiv Principality and since the XII century. - To Novgorod-Seversky. At the time, was built many villages and cities. But the bitter internal wars weakened the principality, which led to frequent attacks Polovtsian (in "The Tale of Igor's described the events of those times when Prince Igor Sviatoslavych defeated the nomads and taken prisoner). From the Mongol invasion in 1239 affected the ancient cities in the area, many of them were completely destroyed. Much of the territory of Sumy in the XIV century. captured by the Lithuanians. According to the 1503 armistice that ended the war with Moscow, Lithuania, almost all of the mobhivski Sivers'kyi land and went to Moscow State. During the XVII century. Sumy region has been the subject of land wars between Russia and Poland. There was a border state between Ukrainian Cossacks and Slobozhanshchina - a wide strip of land that they settled the Ukrainian. In 1658 in this new land was created and Sumy Ohtirsky shelves, subordinate Belgorod Province Governor. In the XVIII century. deaf city was the seat of Ukrainian Hetman Hetman up to the abolition in 1764 In the XIX century. lands were divided between present Sumy Chernigov, Poltava, Kharkiv and Kursk province during the Soviet years - between regions of the same name. After the war, the boundary became modern shape. 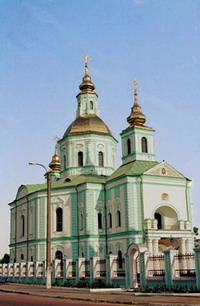 Michael Church, 1753, the city of Romney 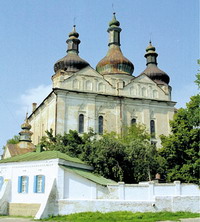 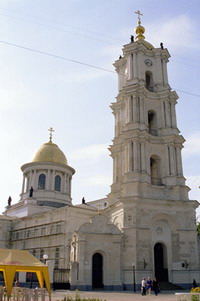 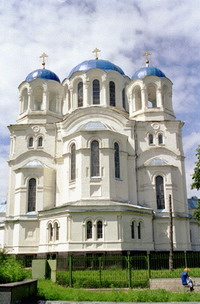 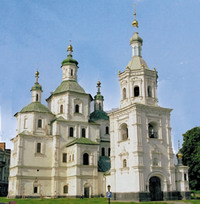 Church of the Resurrection, 1702, Sumy 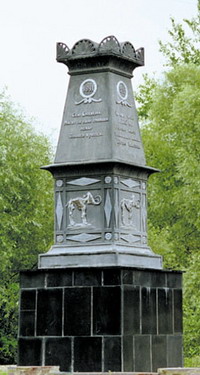 Memorial sign on the findings of the skeleton of a mammoth, 1841, p.. Kuleshovka, Nedrigaylovsky Mr. 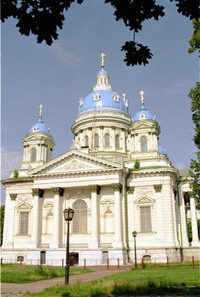 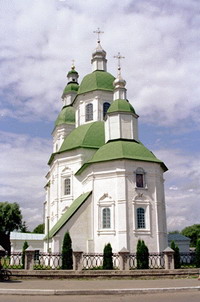