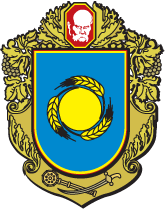 Bridge - 16, including the cities of regional subordination - 6

lies in the central part of Ukraine in the middle reaches of the Dnieper. By the nature of the relief region is divided into two parts - vysochynnu right bank and left bank are low. Right-bank part, with considerable development of erosion forms of relief, lies in the Dnieper Upland (266 m). Along the Dnieper River valley between the villages of Beer and Trahtemyrovom strip 70 km long stretch Kanevsky mountains (80-253 m), on right bank, the robin extends Moshnohirskyy ridge (160-180 m). Left part of the region is uttered in the Dnieper Lowland and is a flat, pohorbovanu, terraced plain (80-150 m), occasionally waterlogged. Among non-metallic mineral prevail, namely: lignite (brown coal basin of the Dnieper), peat, construction materials (a variety of granite, labradorite, limestone, gneiss, quartz sand). More than 400 deposits of various clays, including bentonite. There are deposits of kaolin, bauxite, graphite. Possible rozrobka new deposits of phosphorite, apatite, titanium and gold deposits. Left part of the region has significant reserves of mineral waters, discovered the source of radon water. The climate is continental with mild winters (-5,9 ° in January) and warm, slightly dry summer (20 ° in July). Annual rainfall is 450-520 mm. In the 181 river length of 10 km. The main water artery - the Dnipro and its tributaries (Ros, and Vil'shanka Tyasmyn - right, Sula and Supii - left). River Mountain Tikych Tikych and rot belong to the basin of the Southern Bug. In the Region - 33 reservoirs, including parts of the Kanev and Kremenchug reservoirs, flooded more than 650 lakes and ponds. The soils - predominantly black and typical malohumusni slabohumusni by forests - light gray, gray forest, and dark gray high lighted. There are alluvial sandy and sandy-clay soils (on the left bank of the rivers) and wetlands in floodplains - peat. Forests cover 15% of the region. Burs, subordi, oak-Decemberany or are not trees form forests in the valleys of the Dnieper and Tyasmyn. Oak-hornbeam forests occur among the plowed plots to watersheds and slopes of hills. Floodplain forests of alder, willow, poplar trees grow in river valleys to wetlands areas. The wildlife area is diverse, but a few. There are 41 species of mammals, 275 - birds, 39 - fish 11 - 8 species of amphibians and reptiles. Among the adverse natural processes - and the plane washed away deep erosion, abrasion and sliding events along the banks of reservoirs, sufoziya on watersheds and on the loess terraces of the Left Bank.

reclamation: creating watersheds or ravine and gully erosion and waterproof (along rivers) afforestation, reforestation sands. In the 411 territories and protected the fund from which public values: a nature reserve, 4 sanctuaries and 1 branch, 6 natural monuments, place names, zoo, 6 parks-monuments of garden architecture, a branch of the regional landscape park, 40 natural reserves.

the region was found more than 100 remains of settlements Tripoli culture about hundreds of ancient settlements and burial mounds of Scythian times. Cherkasy region was part of the land, where at the beginning of a new era formed the nucleus of early East Slavic tribes, and by the Kievan Rus was a principality of Kiev. In 1239-1240 he these lands were devastated by the Mongol-Tatars. In 1384 appear the first mention of Cherkasy, which since the end of XV century. became one of the centers of the Ukrainian Cossacks. May 16, 1648 Korsun was one of the decisive battles of the National Liberation War led by Bohdan Khmelnytsky. Residence of the Ukrainian Hetman in 1648-1676 biennium was Chigirin. Cherkasy region was one of the main areas of Gaidamats'kyi groups in Ukraine and development haidamak movement that reached its greatest rise in 1768 and went down in history as "Koliivshina. In 1797 Pravoberezhna Cherkasy became a part of Kiev, and the Left - Little Russian provinces. The region is called the edge of Shevchenko, the outstanding Ukrainian born with. Moryntsi Zvenigorodska area and was buried on Mount Chernechey near Kanev. In Uman park is world known Spfiyivka created on the orders of Count Pototsky and named after his wife Sofia. Since the formation of Cherkassy region in 1954 (Before was part of Kyiv region) limits its unchanging. 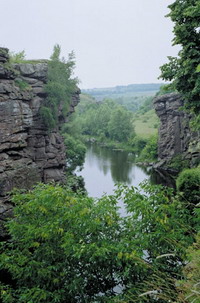 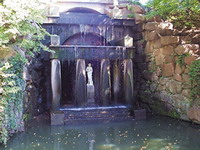 The grotto of Venus in the Park "Sofiyivka, Uman