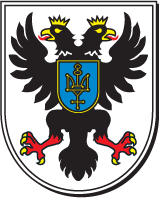 Bridge - 16, including the cities of regional subordination - 3 (Slavutych subordinated to the Kiev region)

lies in northern Ukraine, on the left bank of the middle reaches of the Dnieper River in the basin of the Desna. The surface area - mostly low-lying and flat, sometimes - polohohvylyasta plain, bent to the southwest. It lies in the Dnieper lowland. In the north-eastern region circulated Karst (funnel, karst abyss). In the Southeast - increased hilly-wavy parts located within the Poltava plains (100-220 m). It is dominated by erosion-accumulative relief forms (ravines, gullies) in combination with accumulative glacial and water-glacial shafts. On the sandy terraces - aeolian landforms (ridges, hills, dunes). In the floodplains of the Dnieper, the Desna River and its tributaries waterlogged surface covered with peat bogs. In Chernihiv region has a variety of minerals. The importance of having fuel - oil and natural gas (northern Dnieper-Donets oil and gas field). The most significant deposits of peat - in Ripky, Chernihiv and Semenovskoe areas. Industrial importance limestone, gypsum, chalk, sand (glass and building), marl. There are about 15 deposits of clay suitable for making tiles, tiles, pottery and art pottery. Ichnyanskom area operated only deposit in Ukraine bischofite unique for their medicinal properties and stocks. There are mineral springs.

In VII-VIII century. in modern Chernihiv region lived Siveryany Eastern Slavic tribes. From the X century. Chernihiv-Siver land was part of Kievan Rus. In 907, the appear the first mention of Chernivtsi. Since 1024 city became the center of Chernihiv principality, and the size and importance second only to Kyiv. These are the many monuments, which together with the Kiev temples have golden fund of Ukrainian architecture. In 1239 Chernihiv region were destroyed and burned by Mongol-Tatars. Later Chernihiv was the property of Lithuania - the XIV century., Muscovy - from the beginning. XVI century., Poland - beg. XVII. After the National Liberation War of 1648-1654 Chernigov land administratively divided into 4 regiments that existed prior to 1775 Hetman was the residence of Baturin. In the Northern War the city was completely burned by Russian troops (in 1708). In 1802 was established ChernigovMali province. Great losses suffered Chernihiv during World War II, but was able to rise from the ruins, and many times over the centuries of its existence. 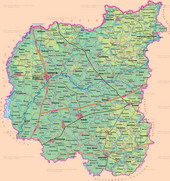 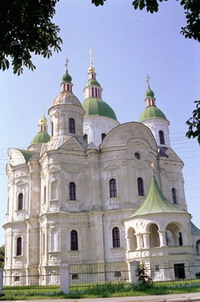 Church of the Nativity of the Virgin, 1752-1763 biennium, the city Kozelets 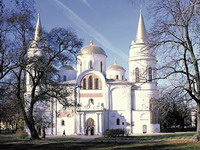 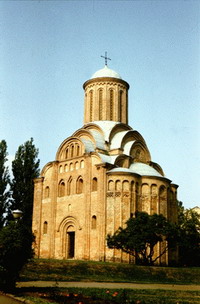 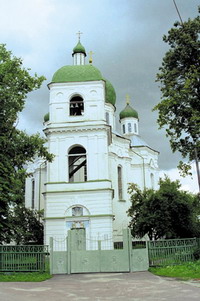 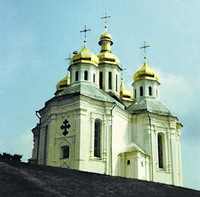