Kyiv - the capital of Ukraine, a city that has a special status, the administrative center of Kyiv region and Kyiv-Kiev is

Kyiv is located in northern Ukraine in the middle of the Dnieper River on the border of forest and forest-steppe physiographic zones. Dnipro divides the city in half. The northern part of Kiev on the right bank uttered Polisskiy lowland, right bank of the south - the Dnieper Upland, and is a high platopodibnu plain dissected by ravines, gorges and valleys of small rivers. Relative height is 100-150 m. Characteristics of relief right bank of hills, inselbergs (Starokievskaya, Shchekavytsya, Horevytsya, Fox, Black, Batyyeva) and ravines (Babin, Protasov, Kmytiv, Smorodinskii etc.). Left part of the city lies on the Dnieper Lowland. This terrace, weak plain with heights to 35 m. Kyiv climate is temperate continental with relatively mild winters and warm summers. Average January temperatures -6 °, July 19,2 °. Rainfall - 550-628 mm a year. Influence of Kiev and Kanev reservoirs causes strengthening breeze circulation, a rate changethose of wind and rainfall amounts. The main water artery of the city - the Dnieper. The width of the river within the city - 400-600 m, depth 6.12 m. On the banks of the Dnieper sandy beaches stretch. The river forms numerous bays (Matviyivska, Starik, Harbour), ducts (Rusanivska, Kiev, etc.), flood lake (Telbyn, Radunka). Within Kyiv and small rivers flow: Lybid, Syrets, Nyvka, Vita, Gorenka. Significant areas Lybedi bound into the underground reservoir and Syrets Nyvka form and rates. Kyiv is surrounded by continuous circle of woods. In the north and northwest is dominated by coniferous forests and platyphyllous (oak-pine, hornbeam and oak-pine) in sod-podzolic soils. In the forest-steppe zone in the wide-forests - mostly dark gray and gray-ashed soil. The city is a lot of parks, forest parks, squares, and the hydro park and botanical gardens. Within Kyiv - 82 territories and objects protected areas, including national importance: reserve Rangers, PAm'yatka Nature Romanivs'kyi swamp, 3 botanical gardens, zoo, arboretum Syretsky, 9 parks, monuments of landscape architecture, 3 terrain parks. Many residents, guests vpodobaly vacation in resort areas (Zaspa, Pusha Voditsa etc. .).

City, which appeared Kyiv, from ancient times was attractive to people dwell. Archaeologists have examined parking ancient hunters, the most famous Cyril. Later, due to its unique geographical location, the area became the scene of Kyiv settlements of various tribes and major shopping center. In the rivers of the Dnieper and Lybedi investigated the remains of settlements and hillforts almost all archaeological cultures known in the Middle Dnieper. But the real founders of Kyiv were Slavic tribes that were part of the union glade. Common legend (establishing the Kyiv Prince Kyi Polyansky and his brother) recorded in the undated part of the record. Most scholars date back to the end of the event V - early VI century. Actually, it is about establishing fortified residence of the Prince (remnant hill Kiya "archaeologists have researched the north cape mountains Starokyivskaya). However, there is no less reasonable assumption that as the administrative center of Kyiv Podniprov'ya appeared simultaneously with the Ruthenian state on the border of VIII-IX centuries.

In the first third of the IX century. city was paying tribute to a time Khazar Khaganate, but soon released by Varangian wife, led the princes Askold and Dir. Since then, Kyiv became the meeting place from all over Russia gathered merchant fleet and troops towards Byzantium. Greater international publicity gained their first attack on the Prince Askold Constantinople in 860 Around 882, the Kyiv treacherously captured Prince Oleg of Novgorod. He first joined the northern and southern Russia in one state and proclaimed the capital of Kyiv - "mother of cities of Rus. City at that time consisted of two separate parts - the mountains and by the boyars yards and hem, which was commercial and manufacturing center of the city. City structure complementary Kiev suburb of villages, towns pozamiskymy affluent, urban agricultural land. Population of Kyiv from the beginning was the motley as the ethnic composition and by religion. To end of X century. Most Kiev Slavic gods worshiped Perun and Veles. But in the IX century. Christian community existed here, the X century. known Jewish, later - Armenian, German, etc.. Baptism of Rus Prince Vladimir in 988 acquired epochal significance of public and political act. Kyiv is the capital of one of the largest Christian countries of Europe, the center of the Rus Commonwealth. Building a brick Church of the Tithes (990-996 years) initiated the development of ancient monumental art.

most flourishing ancient Kyiv reached during the reign of Yaroslav the Wise (1019-1054 biennium) and his sons. Jaroslav constructing a vast system of fortifications of the town with the state Golden Gate and the majestic Hagia Sophia, famous for its mosaics and frescoes. Begin to rapidly develop literature, various arts and crafts. The city and around numerous monasteries there, among them religious and cultural significance is attached Caves - one of the first chronicle of cells. In the Ancient Rus period dozen monks are famous for their holiness (among them Sts. Anthony, Theodosius, Agapov, Alipio, Nestor the Chronicler, Ilya Muromets et al.) Walls of the monastery came from more than 50 bishops. During the XI-XIII centuries. Kyiv is one of the largest cities in medieval Europe. Its territory amounts to 400 hectares and a population - 35-50 thousand people. At the same time the city ever suffered from raids of nomads - Pechenegs initially and later Polovtsian.

After the death of Vladimir Monomakh intensified strife between autonomous princes, and metropolitan status of Kyiv during the XII century. gradually reduced to nominal. City twice subjected to devastation Rus princes: in 1169 Andrew Bogolyubsky army in 1203 - Rurik Rostyslavycha. One of the most dramatic days in the history of the city was December 6, 1240, when the Mongol horde of Batu Khan won the city by storm and almost completely destroyed it. Then Kyiv long lost its meaning. The decline of economic and political transfer in Kyiv strengthened in 1299 northeast Rus Rus residence metropolitans (which, however, retained the title of Kiev).

regenerate city began only in 1360-the years when the authorities came under the Grand Duchy of Lithuania. Kyiv became the capital of autonomous princes of the family Gedimin that carry large vidbudovchi work, put a wooden door. Some time in Kiev coin its own money. In 1471 Kiev principality was abolished and transformed into a province. The devastating attacks Tatar hordes in 1416 and 1482 were in the way of normal development. However in 1499 Kiev commoners get self Magdeburg Law, and during the first half of XVI century. rebuilt Kiev Pechersk monastery and town around the Assumption Monastery, which was subsequently granted title and privileges of laurels. 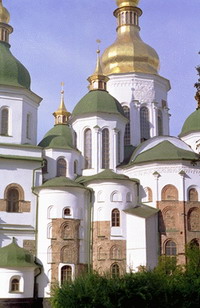 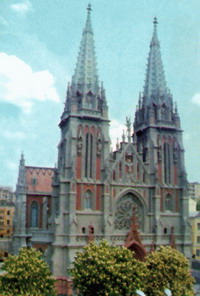 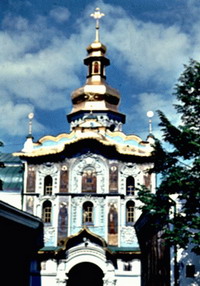 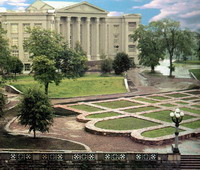 National Museum of History of Ukraine 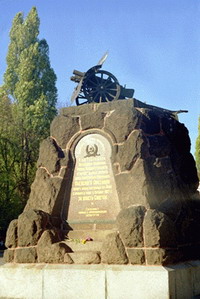 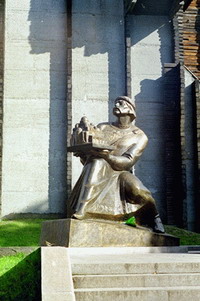 Monument to Yaroslav the Wise, 1997 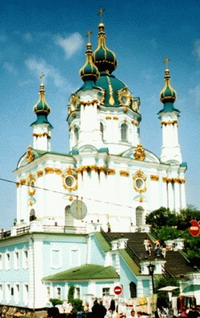 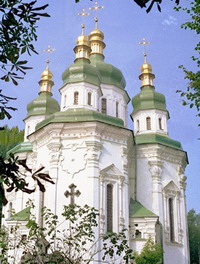 Church of Our Lady Pirogoschey, reproduced in 1996 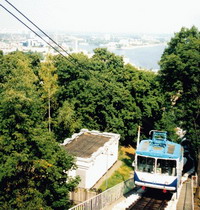