1.Prychyny and essence of agrarian reform

Impressed by the revolutionary events of 1905-1907 ruling Russian Empire recognized the need for economic and social change. Great expectations relied on agrarian reform that associated with the name of the head of P. Stolypin. It was planned  perform for 15-20 years.
The main cause of agrarian reform was the existence of feudal survivals in the village, which hampered the development of agriculture. Key among them - landlordism and rural communities. Rural communities were  legal owners of the land without their permission peasants had no right to freely  dispose of their holdings. Inside the community among its members periodic redistribution of land took place. In addition, peasant inheritance consisted of several bands (segments) located in different parts of the communal land. Thus, a farmer was not interested in application of agricultural machinery or agricultural innovation for After another redistribution of land he could get much worse quality. Many farmers do not have a working livestock and implements, handed put in your lease, but continued to be regarded as tax payers. Solidarity of peasants tied to the community. The consequences of such an order were impoverished peasants and strengthen its protest moods.
In addition, most farms had a natural character and  not oriented to the market. Almost everything that went to farmers vyroschuvalos own needs. On the other hand, the demand for agricultural products increased due to rapid industrialization and urbanization. Failure to resolve the problems of the village, where about 80% of the population Dnipro region, entailed social tension, which were the result of revolutionary events of 1905-1907

Agrarian reform was intended to solve a complex series of problems:

Could the implementation of these tasks is really to solve agricultural Questions? Why elimination of the community, in the opinion of P. Stolypin could strengthen social resistance to autocracy in the country?

The reform was initiated in November 1906 by decree of Prime Minister P. Stolypin "on the allocation of rural communities. Ultimately it was legally  issued two laws 1910 and 1911.

How in the actions envisaged reform, realized its objectives?


Under the reform, everyone domohospodar received the right to keep a  to private ownership of communal lands that were previously in its constant use. Farmer could buy from the community and "surplus"  land. In addition, by securing a land he was entitled to claim summary of his community of land in one allotment within the Farm or cuts. The peasants who came from the community could move from the village to the highlighted plot - farm where they built them housing and obzavodylys economy. Or they could save the mansion in the countryside, expanding its farm have been placed in individual inheritance - cuts.

Cuts - Of scattered bands (segments) communal land in one allotment, which transferred to private ownership an individual farmer.
Hamlet - An independent peasant farming, which is formed by extracting the state land outside the village.

In those regions, where for the past 24 years there was no redistribution communal land, the villagers became owners of their plots automatically. Only land - forest, hayfields - remained jointly owned. Landed estates, still remained behind by their owners. For the success of agrarian reform government created a special fund of state treasury and Peasants' Bank land from the landlords who had sold to farmers for the payment of 55.5 years. These lands created distinct hamlet and farm.

2.Osoblyvosti of the agrarian reform in the Ukrainian lands and its results

In itself, suggests a new P. Stolypin agrarian program was States that was aimed at catching the Russian Empire from advanced countries. Make it through the planned introduction of a wide market relations in rural areas and increase marketability of Agriculture economy, strengthening the economies of wealthy farmers. Ukrainian peasantry  P. Stolypin measures perceived as getting rid of the sparseness land lines (segments) and landlordism. But the imperial power, adapting agriculture to capitalist conditions while trying to maintain landlordism. This policy was particularly relevant for central regions of Russia where feudal Remnants felt stronger. In Ukraine, agriculture was already "saturated" and the capitalist elements of P. Stolypin reform had greatest success. On the eve of reforms in the Dnieper peasants belonged 96.4 million acres of land, landowners and 63.9 million acres. Therefore, further redistribution of landed estates with the adoption of reform quickened only. During the first three years of reform in Ukraine landlordism declined by 8.2%, and area landowners' crops before the first World War II was only 18% of the total.

However, diversity in forms of land ownership in Ukraine caused the different results of reforms in different areas. Thus, the destruction of communities was important example for the Left Bank, where community-based land constituted 51.6% all land or Kharkov province (93.1% of communal lands). However, in Poltava province communities possessed only 17,9% of land, and Right Bank in general 3,5%. Clearly, the way peasants from the community actively is carried out on the Left and the Kharkiv province.

P. Stolypin reform had success in Ukraine. This is explained in particular psychological and historical peculiarities of the Ukrainian peasantry. Favorable natural conditions attached to effectively develop individual, Podvirna economy, which laid the tradition landlordism. Bowery were typical business organization Ukraine since the second half of XVIII century. Relatively long, compared to Russia, the period of serfdom in the Dnieper not traction destroyed Ukrainian peasants to private entities. During 1907-1915 pr. Right Bank went from 48% of rural communities, in the South - 42% of the Left - 16,5%. In 1916 formed 440 thousand farms, which constituted 14% of peasant households. These rates were significantly higher than in European Russia, where from the community vydilylosya 24% of farms and hamlets pereselylos to 10,3%.

In the hamlet of resettlement farms had to be from 250 to 500 rubles. Of course, not all farmers have the necessary funds, so vast majority of these farms created middle.

Important role in implementing the reforms played a Rural  bank. Already during the 1906-1909 biennium Ukraine sold by landlords banks 423 hectares of land. The Bank in land acquisition to proceed to  mainly prosperous peasants which would pay interest for the given credits. Farmers who were unable to pay loans, lost land and it became the property of the bank. In 1906-1910 he peasants Ukraine bank bought 528 hectares of land, almost 83% of owners were purchased land owners and farm cuts. Banks bought  not only landed estates, but those villagers who sold their plots, pereselyayuchys east of the Russian Empire.

An important component of the Stolypin agrarian reform was immigration policy. Over the years 1907-1914 from the European part Russian Empire on vacant land in the Ural moved 3.3 million villagers, including 1.2 million Ukrainian people. The main reasons for migration were: peasant land poverty and bezzemellya, difficult economic conditions Most farmers harvest years 1908-1909 in Ukrainian provinces.

Immigrants granted 15 hectares of land on the head of the family and 45 - the rest of its members. Ukrainian populated Siberia and Far East whole districts. Thus, among the Ukrainian settlers in Primorsky Krai accounted for 75-80% in the Amur region - 60-65%. They immediately formed a settlement with their family names that have been preserved to this day:  Pereyaslavka, Chernihivka, Upper monomials and others.

Move to new ground not only malozemelni farmers, but also wealthy. After selling their land in Ukraine, they bought tools, agricultural machinery and sometimes implemented their ability to new areas with greater economic prospects for themselves. However,  it was not always.

Financial difficulties, lack of labor and tools, unusual climate, chronic hunger, lack of qualified medical care indication to a very high mortality rate, which reached 30-40% of immigrants. That's why about a quarter of all returning migrants back to Ukraine. Basically they were the ones who did not have sufficient funds the deployment of economic activity.

Objectively, the resettlement of peasants on the outskirts was progressive for Russian economy. However, the interest of imperial power was not only in this plane. P. Stolypin felt it appropriate to move in outback regions most dangerous part of landlordism in rural and thus defuse the revolutionary situation in the country. On the economic interests of the displaced government cared weakly.

Overall reform of P. Stolypin accelerate the transition of the Ukrainian village of market, strengthened the process of concentration of land in the hands of wealthy farmers (in 1911 they accounted for 7% in Ukraine). Increased use of agricultural machinery, and increased marketability productivity of agriculture. From 1910 until 1913 sowing Square in the Ukrainian provinces grew by nearly a million acres and before World War there was a record crop harvested cereal - 1.2 billion pounds. Ukrainian wheat was more than 40% of the all exports.

However, reform in society has caused mixed reactions, because it did not provide a steady-bourgeois in Ukrainian village and saved landlordism. At the same large landowners have treated with hostility agrarian reform, as fear of losing cheap working hand in connection with the release of peasants from the community,  strengthening and increasing number of middle.

In addition, the village sharpened antagonism between rich farmers (their  number increased) and poor and between peasants and landowners, of which free peasants demanded land. Evidence that peasant protest, which in 1907 was 804, and in 1910 -  already 2434.

Negative about the reform and political parties. Political right forces were not interested in destroying the traditional way of life, left, which preparing for a new revolution, would not diminish social tension in  peasants and farmers counted on as one of the constituent driving forces of the revolution. 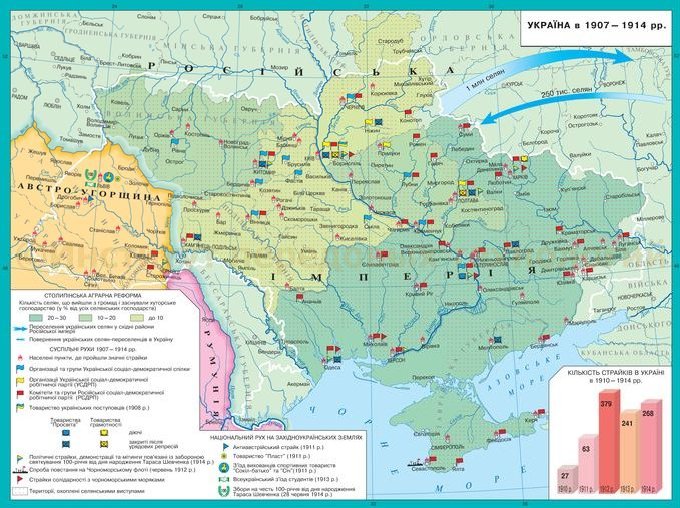 Finally, land reform remained not completed due to killing of P. Stolypin in September 1911 in Kiev Opera House (Formerly the prime minister was made 11 attempts). Terrorist act made a member of the party eserivskoyi D. gaff.

In 1910 in Russian Empire and it belonged to Ukrainian lands began raising industry, which lasted till the beginning of World War II. This process is explained by the results of Stolypin agrarian reform. It increased the number of landless peasants and added to their ranks of industrial workers. If in 1910 in industry in Ukraine, there were 475.2 thousand workers, in 1917 - 893 thousand total, in 1917 the numbers of Ukrainian  proletariat throughout the territory of Ukraine grew by 10%. Simultaneously as a result of land reform has increased the demand for agricultural machinery among rich and middle peasant wealth. They bought equipment solely for use in farming hamlet and distinct, and cooperative societies, which take effect at the time. Apart that the result of the reform is to expand the domestic market, also contributed to raising industry.

First of all, raising difficult and particularly enveloped mining industry. A distinctive feature of Ukrainian industry it remained subordinate to the interests of the Russian Empire. Power attempted to fully use the Ukrainian raw materials and in every way encouraged the development of mining industry. Coal production in Donets Basin from 1910 to 1913 increased 1,5 times. At the same increased  and production of manganese ore in the region of Nikopol. At the same time iron ore in Krivorozhskom pool has grown 1,6 times. Mightily  developed metallurgy. In 1913 Produced in Ukraine national level 68% iron, 58% steel, 53% of agricultural machinery, 80% sugar, etc.. In 1913 on Ukrainian industry accounted for almost 70% of raw materials extraction and manufacturing semi-finished Russian Empire. In general, in 1913 all Ukrainian industry gave more than 24% all-industrial production.

In a growth process of increased concentration industry. Soon there were new monopoly Prodarud "," wire "and others. They concentrated under its control to 80% of sales respective areas and establish a pricing policy. All this contributed  further merging of industrial and banking capital.

Was active in Ukraine and foreign capital, especially in heavy industry. In 1913 financed by foreign companies and controlled 90% of cast iron and coke, 80% of lot, 70% coal and ore.

In the period of industrial growth expanded economic ties with other industrial regions in the Russian Empire. In Naddniprianshchyna machines were imported from St. Petersburg, oil from Baku and Grozny, with wood Belarus, tissue from Russia and Poland and others. With Ukraine in the Russian regions  Empire supplying coal, metal, sugar, salt, grain and other products.

However, in spite of industrial development, the Ukrainian economy, in  technically inferior developed European countries.