After losing the struggle for liberation of the earth find themselves in the western part of Poland, Romania and Czechoslovakia. To hit the Polish occupation of land in Eastern Galicia and Western Volyn, where, according to Census 1931, population 5.6 million Ukrainian people. In the Ukrainian Romania (790 thousand) lived in Northern Bukovina, Khotyn, Akermanskomu Izmailskiy counties and Bessarabia. On the territory of Subcarpathian Rus, which was part of Czechoslovakia, lived more than 450 thousand Ukrainian. Any State that included the Ukrainian lands, should be defined in relation to the Ukrainian minority.

general to determine traits such policy of Poland, Romania, CHSR: a) the forcible assimilation, b) deter economic development, its colonial character, and c) reprisals against the leaders of the national liberation movement, d) national oppression; e) failure of international commitments to Ukrainian autonomous rights.

forms that carried out this policy differed - from soft to hard in CHSR in Romania. In Poland, where the largest Ukrainian population, and with a high national consciousness, the Ukrainian question faced the most critical. The Polish government, pursuing a strategic goal - full Polish influence the captured Ukrainian lands, depending on internal and external circumstances koryhuvav course. During 1919-1939 he was clearly distinguished three periods of Polish policy of the ruling circles of the Ukrainian lands.

In 1919-1923 the Polish authorities tried to bring the world community's rights in the Ukrainian land, and that Poland supposedly provides all of the rights of national minorities. Polish Constitution of 1921 guaranteed the rights of Ukrainian citizens in the native language in everyday communication and in teaching in elementary schools. Moreover, the law of March 26, 1922 granted self-eastern Galicia (Lvov, Stanislavsky, Ternopil province). But as soon as March 14, 1923 Council ambassadors in England, France, Italy and Japan recognized the eastern part of Poland, Galicia, these rights remain on paper. During this period the Ukrainian also tried to assert their rights, resorting to protests, military speeches, census boycott 1921 elections to the Diet in 1922. But for Ukrainian statehood nobody in Europe was not interested.

In 1923-1926 he was the Polish policymakers persistently pursued a policy aimed at assimilation of oppressed peoples. For this purpose the Government of Poland divided the country into two business areas: Poland A, which included indigenous Polish lands, and Poland "B" - mostly Western and Belarusian lands. To different parts and was conducted under different policies. For Poland, the "B" artificial containment policy applied socio-economic development and the full withdrawal of concessions to national minorities. July 31, 1924, a law by which it proclaimed the Polish state. Began closing Ukrainian schools. The Polish government tried to obliterate the very concepts of "Ukraine", "Ukrainian". Ukrainian lands migrated Polish colonists that have received the best land. During 1921-1929 he was here pereselylosya 77 thousand Poles.

political crisis in 1926 led to a new turn in policy towards the Ukrainian people. The third period (1926-1937 biennium) for establishing the "readjustment" led by Josef Pilsudski. The new policy included some concessions and compromises in dealing with national minorities, including Ukrainian. The essence of the new course was in a state of assimilation of national minorities and the denial of national assimilation. An important element of the new model of national policy was an attempt to transform Volhynia in the "cradle of the Polish-Ukrainian agreement. It increased public investment in Volhynia, began a massive bilingual schools are allowed a Ukrainization Orthodox Church.

This policy was carried out to split among Ukrainian: between Galicians and psychology, between supporters and opponents to the agreement with Poland. It was to create a positive image of Poland as a country that tolerates minorities, and provide for appeal against the Ukrainian anti-tough policy in the USSR in 1930 In 1935, he was the biggest Ukrainian Ukrainian Party of People's Democratic Union took course of "normalization" of the Polish-Ukrainian relations. Its leader, Mr. Wise became Vice-Marshal of Polish Sejm. There were concentration camp prisoners amnesty in Kartuzskaya Coast.

But since 1937, Polish policymakers changed course again. In the face of the Second World War, they feared that the Ukrainian issue will be bargaining card in a big game, and any concessions to the Ukrainian fertile soil for the growth of separatism. A new wave of repression swept.

in politics on CHSR Ukrainian also be divided into several stages. Thus, in early 1920 the Czech government tried to create the impression of good faith to fulfill its international commitments to Subcarpathian Rus' autonomous rights under St. Germain treaty. His delay in granting autonomy they explained the lack of readiness of the country's population to independent life through poor education and lack of trained personnel.

In the second half of 1920 - 1930 he held a series of CHSR government reforms designed to ensure implementation of the education system, land reform and more. In pursuing these activities, he contributed their efforts to prevent people from fighting for autonomy, focusing his attention on the "language issue».

In the second half of 1930 government circles CHSR faced with deploying a new wave of struggle for autonomy and public pressure finally forced to Germany in October 1938 to provide land autonomy.

As in Poland, government circles CHSR not contributed to the development of the regional economy. They understood that the land belongs to CHSR temporarily and develop only those sectors that do not require significant investment.

Romania initially took the course to full assimilation of Ukrainian, depriving them of any chance to develop. In the economy of the region did not receive any investment. Unemployment, shortage of arable land, predatory use of natural resources - that's the situation characterized by land.

Only in 1927 formed the party that defended the national interests of the Ukrainian - Ukrainian National Party (UNP). It was the liberal party that operated exclusively legal methods. The leader of the party was Mr. Zolozetskyy. The young generation of Ukrainian leaders, dissatisfied with the moderate policies of the UNP in the middle of 1930 created a secret radical nationalist organization with similar program principles and actions of the Organization of Ukrainian Nationalists (OUN).

Despite the anti-policy of the ruling circles of Poland, and Romania CHSR, their political regimes assumed certain political freedom. Using this opportunity, created a Ukrainian political parties, designed to protect their interests. Thus, in Poland in 1925 there were 12 Ukrainian political parties representing a wide political spectrum. UNDO, which was formed in 1925, was essentially liberal party intellectual elite edge. Leaders of the union were D. Levitsky, V. Wise, S. Baran, A. Lutsky. UNDO advocated a constitutional democracy and independence of Ukraine. A significant political force was the Ukrainian Social-Radical Party (MSzMP), appearing as a socialist party directly. Her support farmers, rural intelligentsia. The radicals wanted to combine the principle of democratic socialism, with the idea of independence of Ukraine. Solving major social and economic problems associated with winning independence. Its leaders were L. Ermakov and I. Makuch. Even atdniyeyu influential political force was the Communist Party of Eastern Galicia, which in 1923 became a Communist Party of Western Ukraine (CPWU) and joined the Communist Party of Poland. At the head stood CPWU J. cleric, R. Kuzma. Politics Ukrainization and NEP, which was conducted in the USSR, helped increase the impact CPWU. But the following policy of the Soviet leadership (collectivization, famine, repression) sparked criticism from members CPWU. While in many Western Communist USSR was repressed, and the Communist Party of Poland, which included CPWU, by decision of Comintern dissolved.

Ukrainian parties have tried to make the most of legal opportunities to influence the state of domestic politics. To this end they were fighting for seats in the Polish Parliament: in November 1927 Ukrainian representative in the Diet consisted of 25 ambassadors and 6 senators in July 1930 - with 50 senators and 14 ambassadors.

After the collapse of the Austro-Hungarian Empire region of Ukraine moved into part of Czechoslovakia. In Saint-Germain treaty CHSR should give autonomy to the territory. But under the Constitution in 1920 CHSR became a unitary state. Failure to comply with its promises CHSR government explained to the government unpreparedness edge due to low education, lack of political elites.

Munich agreement in 1938 forced the government to reorganize CHSR country on a federal basis. Before Transcarpathia opened the possibility Finally get autonomy. The population mainly backed edge Russophile movement. So October 11, 1938 the government instructed the leader CHSR Rusyn A. Brodiyu to form an autonomous administration. Autonomy to the administration and included representatives from the populist (Ukrainian) movement. Soon the leader of the populist movement Voloshyn tasked to form the administration of autonomy. A. Brody was accused of cooperation with Hungarian and intelligence in an effort to connect the land to Hungary. The new administration of the province found itself in a quandary. From Transcarpathia by the decision of the First Vienna Arbitration Rejected were the most economically developed regions and cities: Uzhgorod, Mukachevo, Coast and others who were transferred to Hungary.

ubiquitously acting sabotage troops from Hungary and Poland, which destabilized the situation.

Nevertheless, the autonomous administration of the province went to an active state-building activities. Not having enough support among the population, she asked for help to the OUN leaders whose occupied important positions in the Transcarpathian region and the administration took to the creation of armed formations.

government formation process in the province began to unfold according to the theory of nationalism. Yes, it banned the activities of all political parties except the Ukrainian National Association. All dissenting isolated in a concentration camp (it was not a death camp that formed the Nazis). Elections in January 1939 was rigged, the result was that the UNF voted 86% of voters. An attempt to create armed units "Carpathian Sich caused conflict with the Czechs. Thus, on the night of 13 on March 14, 1939 of the Czechoslovak army defeated the troops "Carpathian Sich, who tried to seize weapons warehouses, and later removed the moderate leadership of the Carpathian Ukraine. This conflict arose before the invasion of the land territory of the Hungarian troops. March 14, 1939 40000th vderlosya Hungarian troops on the territory of the province. Czech troops by order of Prague did not resist. Under such difficult circumstances to protect the land became group "Carpathian Sich (2 thouwith. people). Decisive battles unfolded on the field during Krasny Hust. Meanwhile, March 15, 1939 in the school Justo met the Saeima, which was proclaimed independence of Carpatho-Ukraine. The Sejm passed a law that contained the following provisions:

«1.Karpatska Ukraine is an independent state.

3.Karpatska Ukraine is a republic headed by the president, elected Sejm of Carpathian Ukraine.

Carpathian Ukraine was elected President of Voloshin. Parliament was meeting in the approximation of the Hungarian troops. March 18 the land area was fully occupied. Government Carpathian Ukraine emigrated to Romania. By the end of April, some groups, using methods of guerrilla warfare, the Hungarian resistance to invaders, but failed to stop the aggression. In addition, Carpathian Ukraine moved into international isolation. Stalin's Soviet leadership belonged to her with open hostility, seeing here a dangerous hotbed of Ukrainian samostiynytstva.

Carpathian Ukraine lasted only a few days. The historic significance of an independent state karpatoukrayintsiv was the fact that it was again demonstrated by the overwhelming desire of the Ukrainian people to establish their own state. In addition, the Western population peresvidchylos in danger of insolvency and guidance in support of foreign countries. It became clear that Germany's interest "Ukrainian question" was dictated by the desire to use it in their own aggressive purposes. 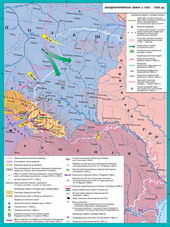 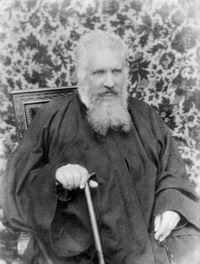 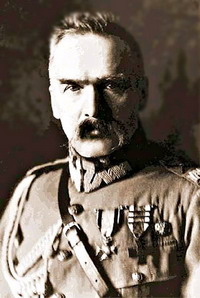 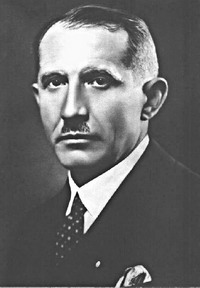 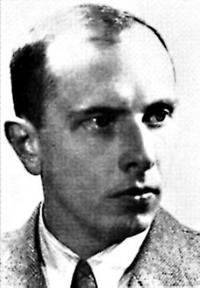 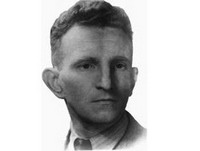 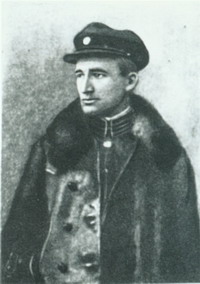 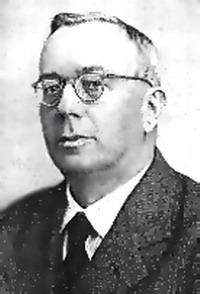 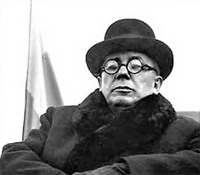