After winning a civil war, despite the devastation and misery, the Bolsheviks did not leave aside the question of culture. As part of its express goal was to build a communist society "cultural revolution", which was to educate people of the communist future. The primary task in this process was the elimination of illiteracy. In the early 20's were illiterate, over half the population of Ukraine. To combat this phenomenon was created network of literacy Educational School, where learning to read and write were all aged from 8 to 50 years. To participate in the eradication of illiteracy in the order of compulsory labor involved in all literate citizens. Along with overcoming illiteracy Soviet authorities deliberately instilled public commitment to communist ideology. All manuals, periodicals, books were imbued with political content. Combating illiteracy has been effective. Already in 1926 the basics gramdeveloped the science of most of the population. In 1939, only 15% of the population aged 50 years remained illiterate.

Bolsheviks to power has changed compared to pre-revolutionary times, and the educational system. In the 20 years she was as follows: children from 4 to 8 years, brought up in nurseries and homes, with 8 to 15 years in orphanages and schools in seven-year employment, with 15 years of age entered in profshkoly with two-year study period, which was completed primary education. In seven years the main attention was focused solely on preparing young people for the production of and does not aim to prepare for university. Also changed methods of teaching and the whole system of teaching from class to school activities.

universities in the USSR during the 1922-1929 period were vocational schools and institutes. To technical people took 17 years. Here, experts were preparing a narrow specialty. Already in operation, gaining experience, college graduates could become an engineer, agronomist, economist and others. In the same institutions of preparation administrators, organizers of production.

With the 30's school has undergone new changes. In July 1930 the Central Committee of the CPSU (b) adopted a resolution on universal compulsory education. To realize the principle of compulsory yazkovosti, needed new school facilities, staff of teachers, textbooks and manuals. For solving these problems in RNA SSR committee created to promote vseobuch ("universal trained") headed by V. Chubar government. Carried out the radical restructuring of the school network. Elementary schools were transferred to seven-year study. Some seven years to ten years of apprenticeship. In 1934 introduced a single school structure of three types: primary (four studies), incomplete secondary (seven year) and secondary (ten years). Mass construction of schools. Already in the 1932/1933 academic year 98% of school children walked to school.

80% of students trained in USSR in Ukrainian schools. Minorities have their own school: Russian, Jewish, Polish, German, Bulgarian, Moldavian, Tatar, etc.. But the late 30's most of them translated into Ukrainian or Russian language training. In the 1938/1939 academic year in all schools in the USSR introduced compulsory study of Russian. Training provided more than 150 thousand teachers.

underwent surgery and higher education. The number of universities. In the 1938/1939 academic year they numbered 129 (in the 1914/1915 academic year was only 19). In 1933, universities have been restored in Kiev, Dnipropetrovsk, Odessa and Kharkiv. At the end of 1935 were lifted restrictions associated with social origin of students. Since the first two in five high schools and technical schools yatyrichok USSR produced 300 thousand specialists.

development of basic science took care Ukrainian (Ukrainian) Academy of Sciences (UAS, YUAN later, and since 1936 the USSR Academy of Sciences), which since the early 20's became more and more state institutions, which strictly rehlamentuvalasya party organs. All other scientific institutions, including the Ukrainian Scientific Society, have been eliminated or subordinated to it.

In 20-30's walking an active process governmentalization science, its ideological. State and party leadership was to determine the nature of the ideological, organizational and personnel changes in science. The main criterion was a scientist and government commitment to the party, not his scientific abilities.

Bolsheviks, having gained power in Ukraine and other national republics mainly by violent means, were to gain the commitment of people to maintain it. To this end they launched an extensive campaign aimed at rooting its influence on the ground, creating a devoted Bolshevik Party cadre potential of the local population. This policy, introduced in 1923, called indigenization. In Ukraine it was done in the form Ukrainization. Ukrainization included dissemination of Marxist-Leninist education, involvement with Ukrainian party, giving them positions, support of Ukrainian culture, the introduction of the Ukrainian language in the party and state business, expanding its use in education, media, publishing. A significant contribution in Ukrainization "made Commissar of Education of USSR and O. Shumsky M. Skrypnyk.

Policy Ukrainization had significant achievements. In the Ukrainian language teaching institutes have moved more than a quarter and more than half of colleges, worked Ukrainian broadcasting, the number of employees among the Ukrainian public administration increased to 54%. And if the members and candidates for the CP (b) The number of Ukrainian increased to 52%, then the CC CP (B) were not more than a quarter, and the Secretary General of the CC CP (b) The Ukrainian is elected. In 1927-1928 he was almost half of all students were Ukrainian republic. In the second half of the 20 years of proceedings in the Ukrainian language was conducted in 75% of public institutions and organizations.

actively carried indigenization policy in areas of Ukraine inhabited by national minorities. In October 1924 within the USSR was created an autonomous Moldavian Republic, during 1924-1925 he was 7 German, 4 Bulgarian, 1 Polish, 1 Jewish national districts and 954 village councils of national minorities, 100 small towns councils. Currently in Ukraine there were 566 schools from the German study, 342 Hebrew, 31 Tatar.

revolutionary enthusiasm and ukrainization created conditions for rapid artistic life of 20 years. There was a whole galaxy of young and talented Ukrainian artists, his creative activity led to a genuine revival of Ukrainian culture. There were numerous centers of literary work. Created an association, clubs, studios. In particular, neo-classics group headed by M. Zerov, union Pluh joining Hart, "The Free Academy of Proletarian Literature" (VAPLITE) and others.

striking phenomenon was the Ukrainian theater art. In 1922 in Kharkov Kurbas founded the avant-garde theater Berezil ".

diverse and meaningful life was music. A prolific composers worked G. Rope, B. Lyatoshynsky. Actively advocated the attention of "Dumka".

first steps made the Ukrainian cinematography. In 1927 construction began at that time the largest in Europe Kiev studio. In 1928 his first film "Zvenyhora" produced by O. Dovzhenko.

In 1920 Ukrainian literature and art have experienced rapid growth. Imbued with a national spirituality, despite the ideological restrictions, Ukrainian culture has reached the world level.

for ensuring Stalin totalitarian regime all spheres of culture came under full control of the party-state. All creative artists association likvidovuvalysya. Instead, the union created by writers, artists, composers who were under the vigilant eye of the party. All the creative work of writers, artists had to meet the requirements unique creative method of socialist realism. Its main features are considered to be: the presence of a new hero-revolutionary proletariat, communist, communist ideals of celebration, reflection and evaluation of life situations from the perspective of Marxism-Leninism; diversity of artistic forms and manifestations. Anyone who did not fit into this system, had no right to work.

Therefore, Ukrainian masters of literature and art, in his work had a pronounced national character, became the object of Stalinist repression. They were accused of "bourgeois nationalism" and destroyed. It branded itself and Ukrainian scientists who conduct research ukrainovedcheskie, teachers, educators and others. As a result of Stalin's repressions almost completely physically destroyed the first third-generation artists of the XX century. That gives rise to speak about "shot Renaissance".

Cultural life in the Western states that were ruled by Poland, Romania and Czechoslovakia, had its peculiarities. The leading role in the development of national culture at Western Galicia belonged, especially lions. It kept original national traditions, shaped frames of national intelligence.

great influence on cultural life in the region had assimilatory policies of governments of Poland and Romania. The most pernicious, the policy reflected the state of public education.

Against this background, it looked like another state of education in Transcarpathia, which was under the rule of Czechoslovakia. It operated 463 Ukrainian schools, funded by the Czech authorities. However, a serious problem in these schools was the language of instruction. At first teaching in them was conducted in Ruthenian language. But after a discussion of linguistic mid 20's years of teaching in them was transferred to a literary Ukrainian language.

big help in the organization of education at Western gave the company "Enlightenment" and "native school. Besides these and other companies maintain a large network chytalen, kindergartens, courses, etc..

establishment of national universities was for Western intellectuals a form of liberation struggle. Without permission and against the will of the Polish government existed in Lviv Ukrainian University (1921-1925) and the Higher Polytechnic School. On the basis of the Greek Catholic Seminary on the initiative of Metropolitan A. Sheptytsky created Lviv Theological Academy in western Ukraine only legal institution of higher education of the Ukrainian language.

essential role in addition to Western intellectuals played the Czech universities. In 1921 to Prague from Vienna moved Ukrainian Free University. Next year in Podebrady opened Ukrainian economic academy. In Transcarpathia there was only one university Theological Lyceum. 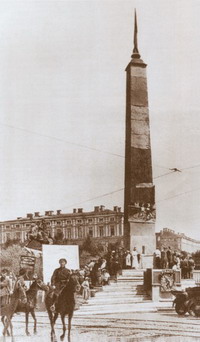 Obelisk in honor of the October Revolution. Kyiv, 1919 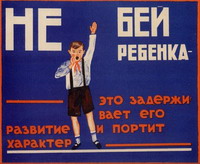 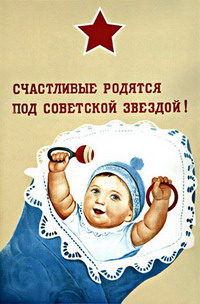 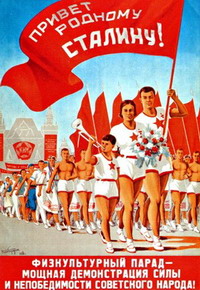 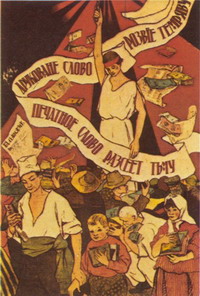 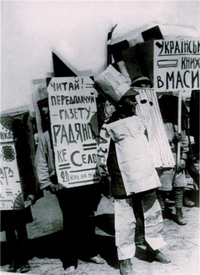 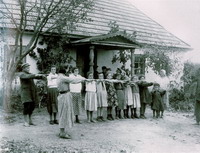 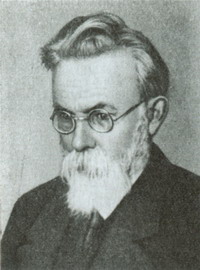 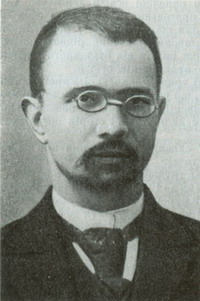 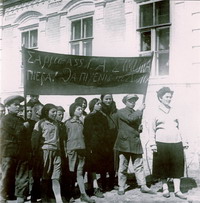 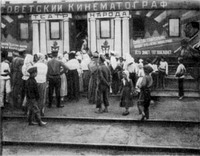 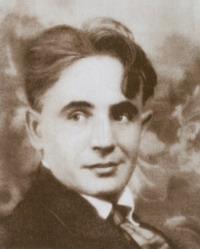 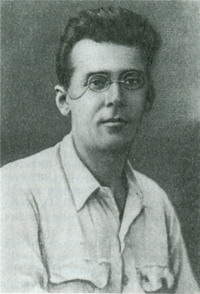 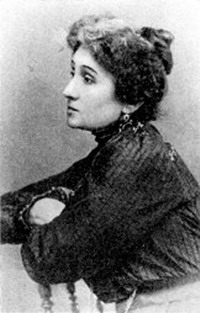 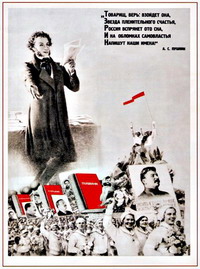 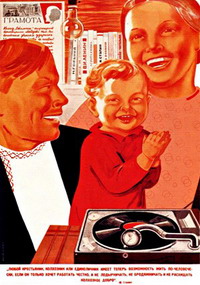 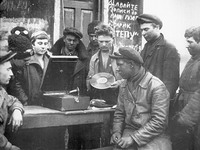 Attack of the Red cavalry. From paintings I. Padalka. 1927 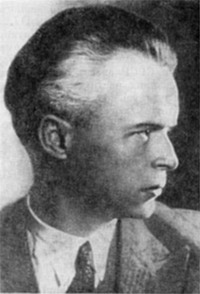 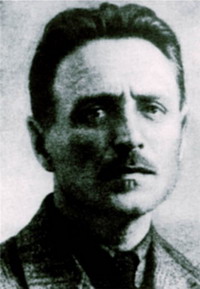 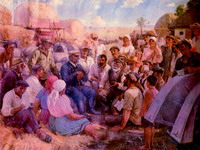 Petrovsky among workers. From paintings Shulga, 1931 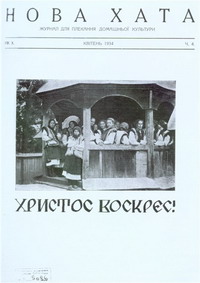 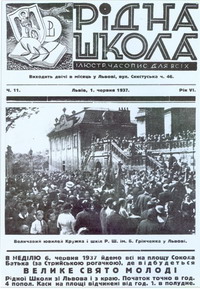 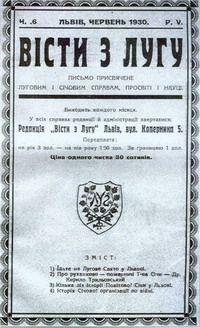 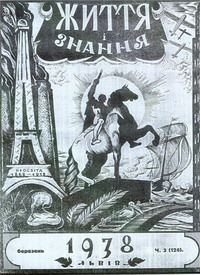 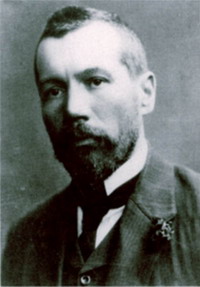