1. Internal situation of Ukraine in the early 50's

Completion of reconstruction is has reduced the administrative-command system with its rigid management. Evidence of this was the XIX Congress of the CPSU (in this Congress CPSU (b) was renamed the Communist Party of the Soviet Union), the latter Congress for the life of I. Stalin.

Congress approved a new five-year plan Development of the USSR in 1951-1955 years. It was tasked to catch up and overtake the leading capitalist states in all economic indicators rozpytku.

XVII Congress of the Communist Party of Ukraine dubbed decision XIX Congress of the CPSU. Speaking at the congress, the delegates seemed competed in zazdorovnyts proclamation in honor of "the great leader and teacher, Comrade. Stalin. " At the head of the Communist Party continued to remain LA Melnikov (From December 1949 to June 1953) "and Chairman of the Government of the USSR Д.Korotchenko (Until January 1954), were obedient performers will "leader". 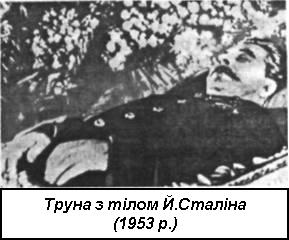 2. The beginning of de-Stalinization in Ukraine

March 5, 1953 Stalin died. This event gave impetus to the process, which later was named "thaw" and manifested in attempt liberalization of political life and socioeconomic reforms.

The most radical Rice entered the process after XX Congress CPSU (1956). Begin the process of de-Stalinization was marked acute power struggle between supporters of Khrushchev and Л.Beria, in which the winner first. Had its echoes this struggle in Ukraine. Republican party organization supported Khrushchev, and then he thanked a favor.

A few months after the death of Stalin on charges of Russification of higher education in western Ukraine and discrimination Local staff were removed as first secretary of the Russian Communist Party Central Committee Leonid Melnikov. In his place was appointed A. Kirichenko, the first Ukrainian to this post (since that time were appointed to this position only Ukrainian).

Natives of Ukraine began to take place and leading to a union leadership. So Р.Malinowski. A. Grechko та А.Moskalenko reached senior Marshal of the Soviet Union, and later even the first two were Defence Ministers of the USSR. В. Semychasnyy took as head of the Federal KGB, and four Ukrainian - Kirichenko, M.Podgoranyy, D. Polyansky and Shelest – belonged to the Politburo (which generally had more than eleven members).

These achievements in Soviet Ukrainian hierarchical system can be explained by their close ties with N. Khrushchev, their personal characteristics of loyal performers will party leader, and the place be taken by Ukraine in the Soviet Union.

All new appointments accompanied by restructuring and improving the very state apparatus. In ministries, departments and administrative bodies on the ground during the 1955-1956 biennium was eliminated 4867 business units, organizations and institutions decreased 92.5 thousand posts of administrative and managerial staff. Simultaneously expanding the rights of local authorities. It certainly had a positive impact on social and economic life.

Stopped mass repression (Military were eliminated tribunals Troops and special meeting of the MIA. concentration camps), began a cautious process rehabilitation of the repressed 30-40-ies and the return of deportees.

3. Joining the Crimean region of the USSR 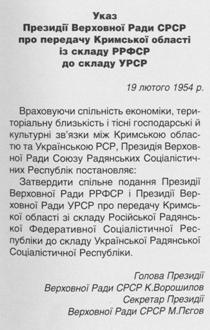 In 1954 was campaign conducted pompous celebration 300 years of the Agreement of Pereiaslav wave swept wide outreach.

The highlight of anniversary celebrations was the transfer of Crimea Ukrainian SSR. February 19, 1954 Presidium of the Supreme Soviet of the USSR, explaining his decision to common economic, territorial proximity and close economic and cultural ties between Ukraine and Ukraine adopted a decree "On the transfer of Cretan region of the RSFSR to of the USSR. As noted, the act is "proof of friendship of the Russian people." 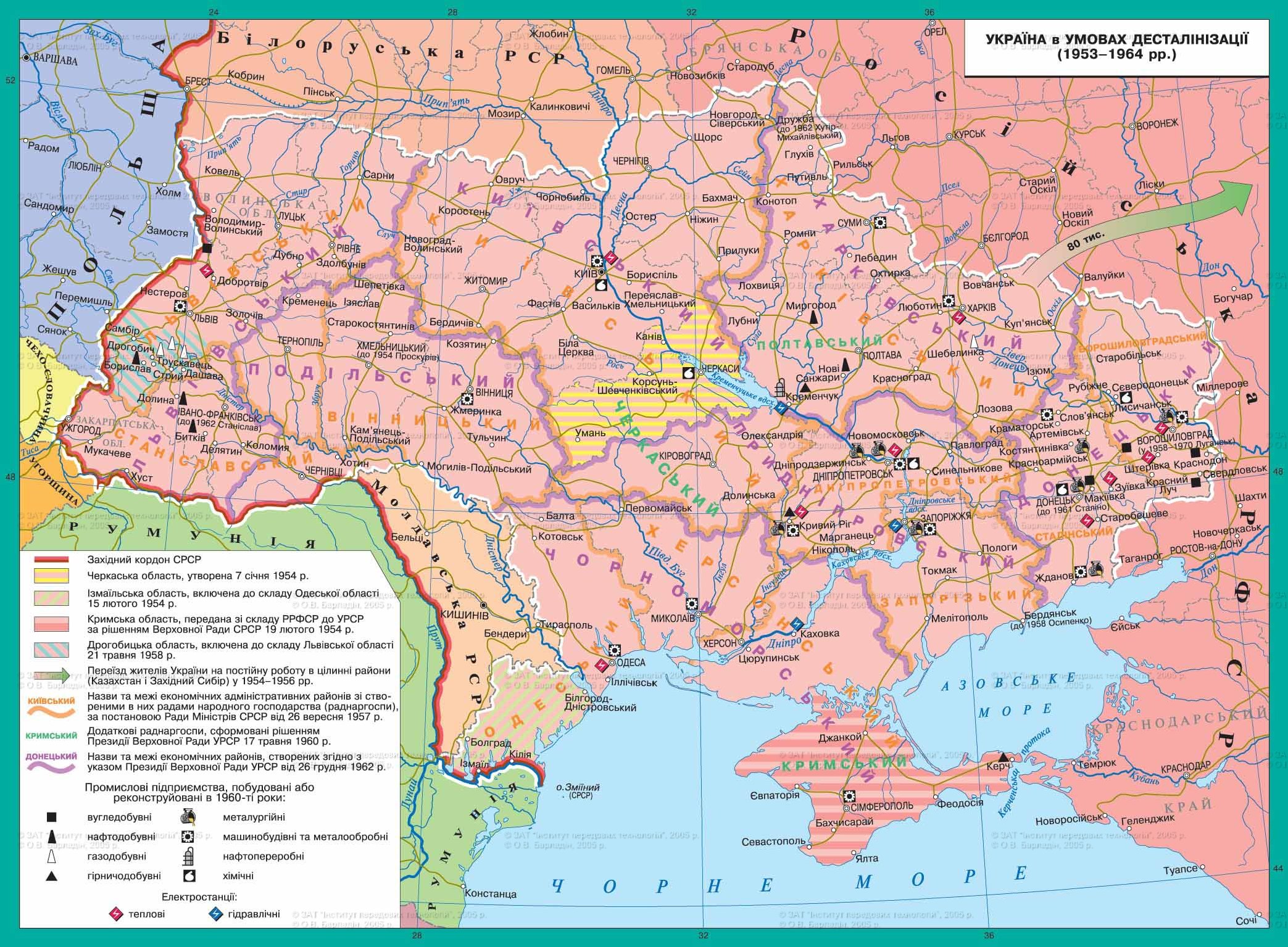 Ukraine in conditions of de-Stalinization (1953-1964 biennium)

4. The state of industry and agriculture in the early 50's. Home reforming of Khrushchev

The new leadership that took power after the death of Stalin, declared that the future of the Soviet Union depends on Soviet success in economic competition with the West. According to Soviet leadership, economic success, and one side would strengthen internal situation Soviet state, on the other - would have shown the benefits of communism. From the 1953 start the reform process.

Immediately there was a question in which direction of reforms. There was no doubt that the weakest link Soviet economy is agriculture, the level of growth in production which for the period 1949-1952 he reached only 10%. while в Industry - 230%. To Moreover, agriculture was unprofitable.

All attempts of the late 40's stimulate the growth of agricultural production have not been successful. Did not help and consolidation of farms in 1950, their number decreased by 42% by through consolidation of small farms into larger and by the end of the year 19 295.

The beginning of reform was put on September (1953) Plenum of the CPSU Central Committee, which mapped out measures to the rise of agriculture.

Through such activities rural economy for the first time in many years, was profitable. Mid 50's was period of greatest growth in the history of collective farm-state-farm system of the USSR. Gross agricultural output for the 1954-1958 biennium compared with previous five years has increased by 35,3%.

Positive developments would be more significant, if not unrealistic nadprohramyThat Life began to be realized from 1954

The first such program was the development virgin and fallow lands. it was announced in February, the March Plenum of the CPSU Central Committee, and its essence was to further the development of cultivation almost 13 million hectares of land (later this number increased to 28-30 million ha) in Kazakhstan, Siberia and the North Caucasus. 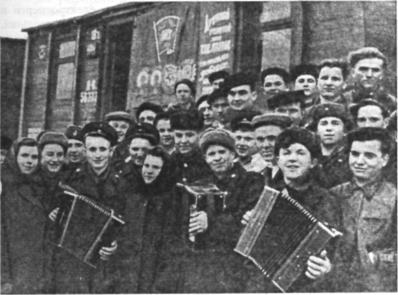 Youth in Kyiv before departure the virgin (1955)

Ukraine in this program is considered as "a source material and human resources. For February 22, 1954 the virgin sent the first group of Ukrainian machine. Overall 1954-1956 he a permanent job in virgin areas have left 80 thousand people, and by 1961 in virgin areas was sent to 90 thousand of tractors and agricultural machinery manufactured in Ukrainian enterprises.

The second nadprohramoyuwas excessive and unjustified expansion of areas of crops of corn, conducted by initiated by Nikita Khrushchev. February (1955) plenum of the Communist Party Central Committee and endorsed its decided to increase crop acreage to corn than 5 million hectares (in 1953 maize crops occupied about 22 million hectares).

Despite the fact that the new Soviet Find drew much attention to agriculture, yet priority continued industrial development.

Stronger field in the republic that SSR status provided the fuel and energy and base metal of the USSR, an important District heavy machinery and military industries. In 1952-1955 he Kakhovka HPP was built, and by the end of the decade have a number of power stations, by which electricity production in the republic increased by 1,9 times. Continued development of coal, oil and gas industry. Thus, 1951-1958 biennium 263 was built mine, developed a significant number of oil and gas.

1. Who was the first secretary of the Central Committee of the Communist Party after L. Melnikov?

2. Any change in personnel policy caused the beginning de-Stalinization process in Ukraine?

3. How was motivated by the transfer of the Crimean region of USSR?

4. What is the role assigned to Ukraine in developing virgin lands of Kazakhstan, Siberia and North Caucasus?

5. What are the contents consisted of de-Stalinization process in Ukraine?

7. Identify the chronological sequence of events:

- Entry Crimean region of the USSR;

- XX Congress of the CPSU and start the process of de-Stalinization in Ukraine.

8. What is the value for social and political life of the USSR had a change in the leadership of the republic occurred in the early 50's?

9. What administrative reforms were conducted in the USSR PA early 50's?

10. What measures of the Soviet leadership sought stimulate the development of agriculture of Ukraine in the first half of the 50's?

11. What you may call the process conditions de-Stalinization in the USSR?

12. In your opinion, why the Soviet leadership, conducting economic reforms favored industrial development, not agriculture economy?

13. Measures to Your, opinion, could make more effective reforms in the economy that conducted in the 50's in Ukraine?