Soviet victory in the war strengthened the development of processes in Soviet society, which opposed each other:

§         the other – increase public consciousness of the people who carried on their shoulders all the hardships of war.

The war greatly undermined the ideology "Cog" because defeat the enemy could only independently-minded people, not performers will blind leader.

The huge contribution of people in the sacrificial victory not only strengthened his mind in self-esteem, but also contributed to the emergence of his sense of the host country's society and its history.

Significantly influenced the perception Ukrainian them stay within the Soviet troops abroad, familiarity with Western lifestyle. The war has shown the people of all immorality, antyhumannist regime of absolute personal dictatorship, creating conditions for critical evaluation system of government and society in general and the head person in particular. Ukrainian people were convinced that, after great sacrifices and victories, he like other peoples of the USSR, deserves better material life and a just democratic regime.

The Stalinist regime of requests answered no reforms, and efforts to preserve the continuity of the situation, increasing control over society, particularly in the realm of ideology.

Manifestations of national identity, critical approach to any phenomena of social life, a space of regulated by the propaganda stereotypes of culture often qualify as Ukrainian bourgeois nationalism, cosmopolitanism, anti-Soviet activity and man threatened the moral and physical destruction.

After the liberation of the territory of Ukraine Nazi occupation began during the restoration of damaged War of schools, cultural institutions, scientific institutions.

Distribution became a movement for renewal demolished and construction of new school buildings by the population itself –"Using traditional building. In 1944-1945 he in the republic was restored and built in 1669 schools. In 1950 prewar network of schools was almost restored, but for establishing the normal education system that was enough: in the mid 50's 16 thousand schools (33,2% of the total number), in which studied 1.67 million children were forced to organize classes in two or even three changes. A significant number of these institutions, especially in rural areas and in working settlements was located on the premises, was designed for training.

Schools always felt an acute need in textbooks, exercise books and school equipment. For financial support those parents could not provide the minimum necessary for learning, vseobuch created fund.

The difficulties facing the system education, has prompted the introduction Network evening schools. There were also based training courses for adults professional correspondence schools.

But the realities of the time needed more educated people. In 1953 was taken to mandatory seven years of education. This, in turn, created additional difficulties – lack of facilities, teacher training manuals.

As in the prewar years, the Communist party wanted to make school a tool of the establishment and strengthening of its control pupils over youth. Pioneering work has been restored and Komsomol organizations. Grafting of Joseph Stalin and commitment to the ideals of communism been announced most important vocation school.

У postwar years the process of steady reduction in schools Ukrainian language teaching. Yes, since 1948 to 1954 number Ukrainian schools declined from 26 to 25 thousand, and Russian – increased from 2720 to 4051, or 1,5. In 1953 in Ukrainian schools enrolled 1.4 million, and in Russian and mixed – 3.9 million children.

During the Fourth Five were replicated system higher education.

As a result, held after the war reorganization of higher education in the USSR decreased in comparison with pre-war period, while the number of students increased from 99 to 325 thousand (by 1956). However, almost half of them studying at the correspondence and evening offices.

Classes at most schools were built Russian.

3. The development of science in Ukraine

In the postwar years, renewed work research institutions of Ukraine, were several changes in organization of scientific research.

If in 1945 in the republic there were 267 research institutions, then in 1950 is 462, including including more than 30 academic institutions. Zmitsnyuvalasya, albeit slowly, their material base, increased human resources. Number of scientists in Ukraine has achieved in 1950 22,3 thousand people.

Scientists of Ukraine made significant progress in research of basic sciences, their approach to the needs of the economy. In republic in 1946 started first в Soviet nuclear reactor. In 1956, General Designer building spaceships in the USSR was a native Zhytomyr С.Korolev.

Under the direction of S. Lebedev in Kiev in 1948-1950 biennium was made Europe's first digital computer.

Significant technical achievement was construction in 1953 then the world's largest all-welded bridge over Sky length of 1,5 km (Cities them. Paton in м. Kiev). For a short time with new automatic welding technology was built pipeline Dashava – Kyiv.

However, almost all outstanding achievements of science and engineering maths place only in areas related war or adjacent to it production.

President of the All-Union Academy Agricultural Sciences T. Lysenko, supported Stalin, promised to create in a short time surplus agricultural products through its own methods of developing new forestry and livestock, announced a mythical part of the gene.

His position is not argued T. Lysenko scientific calculations, and ideological cliches, borrowed from the "short course History of the CPSU (b). Genetics proclaimed "Selling his daughter Imperialism, and cybernetics – its "Native sister. As a result of persecution, geneticists, which he started in 1947-1948, repression experienced scientists biologists Д.Tretyakov, NBS, and.Shmalhauzehn, І.Polyakov, S.Delaunay, that for years has hindered the development of biological science.

In difficult conditions worked figures literature and art, but despite the circumstances, the 40-50's were created many works that have left its mark in the artistic culture of the Ukrainian people.

Triumphant conclusion of the war contributed strengthening personal authority Josef Stalin. But the realities of postwar life needed tomitsnennya ideology of the Stalinist regime. Realizing a winner, people wanted a better, prosperous and free life. Are more often appear catholicity and national feelingAn exponent of which was primarily the intelligentsia. It was against her and was directed edge of Stalinist repression.

Postwar period deservedly associated with known Stalin's toast "by the great Russian people." It Stalin was the desire to combine the idea of communist ideology exceptional role in Russian history. For each invention of Western scholars Soviet propagandists find a Russian who expressed this idea earlier, at each distinguished by the Western was the best for him by a Russian, and each outstanding statesman of the West was a Russian with the even outstanding achievements.

This new ideological foundation Stalin's regime had particularly negative consequences for the Ukrainian people. In 1950, Stalin put forward the thesis that Russian, Ukrainian and Belarusian nation is result of branching "One of the Old Rus nationality.  This "Old one nation" taken was interpreted as davnorosiyskuAnd in any case not as ancient.

So in the USSR there were a phenomenon that had received name from the name of its chief conductor, the official organizer and theorist А.Zhdanov.

«Zhdanovschyna" (1946-1949 biennium) meant a strengthening of Stalinist regime in the intervention area ideology, culture, science, literature and art in order to establish tight control over the spiritual development of Soviet society.

Was deployed to fight "Bezideynosti, bezpryntsypovosti, formalism, cosmopolitanism and servility to the rotten West 'against "Bourgeois nationalism." During the period from 1946 to 1951 adopted 12 party statutes to ideological issues. The first were of the CC CPSU (b) "On journalsZvezda"And"Leningrad» (Against creativity Anna Akhmatova and Mikhail Zoschenка), "On the film"Bolshaya life» et al.

According to the established pattern this But in 1946 CC КП(B) also adopted several resolutions: "On distortion and errors in coverage of Ukrainian References in "Essays on the History of Ukrainian Literature", "On the magazine of satire and humor "Pepper". "On the magazine" Motherland "," On the dramatic repertoire, and other Theatre of Ukraine " et al.

CC КП(B) notes that the literary and art magazine "Motherland" - The body of the Union of Soviet Writers of Ukraine - is quite unsatisfactory.

The editors of the Fatherland " (Yanovsky executive editor) did not fulfill the CC КП(B) of 16 October 1945, which ordered the editorial in a short term fix serious ideological and political shortcomings and mistakes that had place in "Ukrainian literature", and strongly raise the ideological and artistic level of the magazine. Instead, the editorial further deepened the flaws and errors magazine, giving place on their pages and works of art object, which is preached bourgeois-nationalist ideology, petty-bourgeois philistine views life, APO-litychnist and poshlist.

Over the past six months, along with successful and useful works of Soviet literature in magazine contains a number of harmful essays and articles that protyahuyutsya hostile Soviet society and ideas concept.

The editors of the Fatherland " systematically provided their page to promote the bourgeois-nationalist ideologists, articles and novels by several writers and scholars, printed in the "Motherland" in the spirit of the bourgeois-nationalist concept Hrushevsky and Ephraim perekruchuvalas and distorted the history of Ukrainian literature, preached national narrow-mindedness, idealizuvalys remnants of antiquity in everyday life and human consciousness.

The magazine was printed paper nationalist Л.Kovalenko "The poet, patriot and pioneer" devoted to the work Kotlyarevskyi. Echoing antynaukovi bourgeois-nationalist assertion Hrushevsky and Efremova, author trying to prove that the main and decisive in the development of pre-revolutionary Ukrainian literature were not social, and national factors. By doing so aw-tor publicly have given most reactionary bourgeois-nationalistic views and deeply Kotlyarevskogo distorts as creativity and the overall picture of Ukrainian literary process.

2. What are these trends Stalinist leadership in policy cultural testified output this resolution?

To "strengthen leadership" in Ukrainian party organization in Kyiv was sent Л.Kaganovich (Nikita Khrushchev was moved to minor head the government). L.Kaganovichspread Suppression з "Ukrainian bourgeois nationalism. In fact it was just prepared a great "business", which had become a victim of color of the Ukrainian intelligentsia of the time – A. Malyshko, P. Pancha, M. Rila, Yanovsky et al. And initiative of L.Kaganovich appeared to be amiss, and he was recalled to Moscow.

The agenda of the Stalinist leadership faced the fight against "Servility" to the West against "cosmopolitanism". The object of persecution were again chosen writers, artists, scientists.

The campaign aimed to strengthen cultural and ideological isolation of Soviet society from the western world intellectuals opposed to other segments of society, ignite chauvinistic and anti-Semitic, to strengthen the process of Russification, restore image "Internal enemy", so necessary for the totalitarian regime.

Signal for the attack against the "cosmopolitans" became editorial "On a theatrical group antypatriotychnu critics, published in January 1949 in Pravda. Echo This article in the Ukraine was hanging labels "bezridnyh cosmopolitans" to local literary and theater critics.

The campaign against "cosmopolitans" had negative consequences for Cultural Development: in literature and theater, in fact, disappeared the notion of art school, deepened isolation from Western cultural heritage, theatrical and literary criticism become a means of stimulating creative development tool maintenance artists in terms of official ideology, was limited creative freedom. 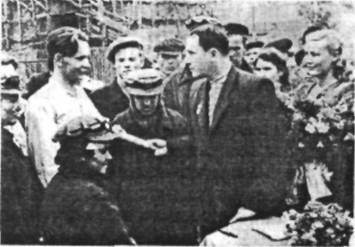 Since the early 50's impending new wave of accusations against the Ukrainian intelligentsia. Were subjected to persecution no Ukrainian writers only, but also Composers (V. Lyatoshynsky, К.Dankevych) and academics.

«Zhdanovschyna" led to braking development of science, literature and art in the country, bare negative phenomena among the Soviet intelligentsia. The Stalinist regime finally opposed a nation abolished the patriotic exaltation years War suppressed shoots of revival of Ukrainian culture.

At the international level "zhdanovschyna"Reinforced the isolation of Soviet artists achievements of world culture, contributed to the confrontational nature of Soviet foreign policy.

1. What happened to much of the national schools Republic in the early 50's?

2. Whom you can call the outstanding Ukrainian scientists who worked in the postwar period?

3. Which of the Ukrainian writers who worked in postwar period, you can call?

4. What changes in the social consciousness of the Soviet people caused the Soviet victory in World War II?

5. What changes have occurred in higher education in Ukraine postwar years?

8. Which goals were campaign against "cosmopolitanism" and its implications for public consciousness?

9. What impact has "Lysenkyvschyny" for the development of science in Ukraine?

12. What goals could you explain a struggle Stalinist leadership to establish complete control over the sphere of artistic creativity?

13. What, your view dangerous phenomena such as "zhdanovschyna»?