the All-Ukrainian referendum on the attitude of the Act of Independence of Ukraine showed that most support the idea of independence has received on the Right Bank and western Ukraine (95%). Moreover, residents expressed Ternopil region "for" at 98.7%, a record. In the predominantly Russian-speaking eastern regions share of supporters of Ukraine's independence fell to 84%, and in the Crimea, the figure was 54,2%.

same day in Ukraine was elected President. Of the six candidates were most popular Leonid Kravchuk - Chairman of the Verkhovna Rada of Ukraine, representative of the former Soviet nomenclature, and Vyacheslav Chornovil - one of the leaders of national-democratic forces at that time head of the Lviv regional council. Chornovil preferred to see the President of the population of Western Ukraine, too - Galicia. However, in most regions Kravchuk won with a total result of 61%.

Next presidential elections of Ukraine took place June 26, 1994 in the election race was attended by seven candidates in the second round (July 10) went Leonid Kravchuk and Leonid Kuchma - the former Prime Minister of Ukraine, Ukrainian President Union of Industrialists and Entrepreneurs. The sympathies of the voters once again became a regional contrasting color. Voted for Kuchma eastern and southern regions, especially those in areas Dnipropetrovsk and Donetsk, Russian Crimea and Sevastopol have given him a record 91.9% of the vote. Pre-election slogans of the Russian language the status of the state and strengthen ties with Russia have turned away from Kuchma voters Right Bank and western Ukraine. Having no choice, this time they gave voice to Leonid Kravchuk. But residents of three regions of Galicia, so that would not see him president in 1991, gave the benefit Kravchuk over 90% of the vote. Yet the President of Ukraine Leonid Kuchma was typing 52% of the vote.

Equally bitter was the political struggle during the elections to the Verkhovna Rada of Ukraine. In 1998 they first performed by proportional and majority system, which allowed political parties to visually check the rating of popularity. Elections were held on March 29. Of the forty parties that participated in the election process, overcome barrier eight.

Communist Party of Ukraine (led by Peter Simonenko) received support in most areas of Central and Eastern Ukraine. By People's Movement of Ukraine (Vyacheslav Chornovil) voted the western region. Socialist bloc and SelPU "For the truth for the people of Ukraine (Oleksandr Moroz and Oleksandr Tkachenko) supported the peasant areas and Khmelnitsky Cherkassy regions. Most voters Dnipropetrovsk region voted for All-Ukrainian Association "Hromada" (Lazarenko). In the Transcarpathian region lidyruvala Social-democratic Party of Ukraine (united). The required number of voters of Ukraine received the Green Party of Ukraine and the People's Democratic Party, and in Sumy - Progressive Socialist Party of Ukraine. In view of representatives of parties that ran on majoritarian Parliament gathered representatives of 22 political parties. In total, 174 places got left parties, 108 - centrist and 53 - right. The geography of public mood again demonstratedstruvala sharp regional division: Western region sympathized with the National Democrats (so-called "right"), the east is held some "communist revenge».

the presidential election in Ukraine, 1999 in the first round (October 31) ran seven candidates. Again, representatives of national-democratic forces did not gain the required number of votes in the second round (November 14) took the current President Leonid Kuchma and Communist leader Petro Symonenko. Choosing the "least of two evils", the population of western regions supported the incumbent President. And three Galician region paid him more than 90% of the vote. In support of Kuchma expressed as metropolitan and industrial areas Kyiv Dnipropetrovsk, Kharkiv, Donetsk region, which also ensured his victory with a score of 56% of the vote. Representative Communists remained loyal residents of southern and central regions.

further development of political life came when parliamentary elections in 2002 National Democratic Party joined forces in the electoral bloc "Our Ukraine", led by Viktor Yushchenko. This enabled them to win in all regions of the north-western half of the state and get 24% of voters. Second place was taken by the Communist Party, led by the desire to support. Traditionally voted for the Communists and the South East, enabling them to gain 20% votes. Pro-government bloc For United Ukraine won 12% of the vote. Voted for the majority of voters in Donetsk region. "Yulia Tymoshenko" won the sympathy of western Ukraine and took 7% of the vote. Socialist Party won first place in the Poltava region and has 7% of votes in the country. Elections showed changes in the political attitudes of the Ukrainian people. First - narrowing the electorate communists, and secondly - the growth effects of democratic forces. But in the course of the Parliament, using power tools, the faction "United Ukraine" managed to attract into its ranks the majority of deputies and the majority electees increase its representation to 177 deputies. Faction "Our Ukraine" together 118 MPs, the Communist Party - 64, SD (U) - 31, "The Yulia Tymoshenko Bloc (YTB) - 23, SPU - 22 deputies.

most dramatic events of the political history of Ukraine independence day unfolded during the presidential elections of 2004-2005 the United democratic forces nominated presidential candidate Viktor Yushchenko. Pro-government structure, with the support of Leonid Kuchma, have nominated a single candidate in the person of Viktor Yanukovych - the current Prime Minister, former head of the Donetsk region state administration. Yanukovych went to the elections under the banner of Russian the state, the introduction of dual Russian-Ukrainian citizenship and relied on the full support of the state apparatus of Ukraine, as well as the sympathy and assistance of the Russian President. Yushchenko is in its election program stressed the Ukrainian patriotism and democratic values. Extremely violent election campaign before the elections described the political poles of Ukraine: Donbas who stood by his countryman Yanukovych, and Galicia who wanted to see in reality Yushchenko Ukrainian presidiumsNTA. As a result of elections held on 21 November 2004, the Central Election Commission declared Yanukovych the winner (he won 49.46% of the votes against 46.61% of the votes for Yushchenko). But during the election itself was found so much abuse, fraud and flagrant disregard for the rights of voters, who outraged the public took to the streets of Ukrainian cities to protest against arbitrariness. Center confrontation was Kyiv's Independence Square, where for several weeks took thousands rally in support of Viktor Yushchenko. Those days are known as the Orange Revolution. Eventually the government was forced to make concessions and agree to another round of elections, held on December 26, 2004 Viktor Yushchenko supported the central and western region, Viktor Yanukovych - South and East. Under the supervision of public and international observers, electoral fraud have been nullified. As a result, Yushchenko became president of Ukraine, gaining 52% of the vote. 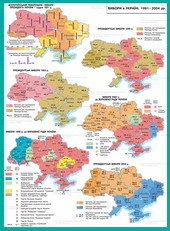