capital of Russia during its heyday was one of the largest cities in Europe. Sow-ing of Kyiv in 1912 - early 13 century. amounts to 50 000 people. The city consisted of two major parts - the mountains and hem. Gore defended the two lines of rollers. The first of them built by Vladimir Svyatoslavich ("city of Vladimir), second - by Yaroslav the Wise (Yaroslav the city). At Mount were located the main temples, monasteries, princely and boyar courtyard. The division was inhabited by craftsmen and merchants. He lay in the valley of the Dnieper, on the banks of its channel Pochayny. Its main market square - Torhovysche - graced the Church of Our Lady Pirogoscha.

with the city were closely related to its surroundings - suburban villages, fortified princely and boyar villages and monasteries. Among the largest monasteries was Caves. In the early years of his monks lived in caves. Later temples and monastic cells built on the Earth's surface. Among the famous residents of the monastery - the chronicler Nestor, iconographer Alipio, healer Agapit.

1. What facilities were located in the garden of Vladimir "and" garden Yaroslav?

2. What temples stood in Kiev by Yaroslav the Wise's successors?

3. What areas, except Mountains and hem, were part of ancient Kyiv?

4. As people of Pochaynu used? 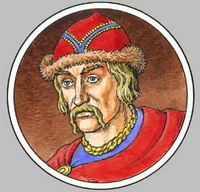 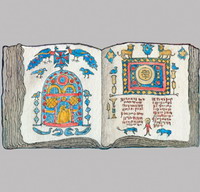 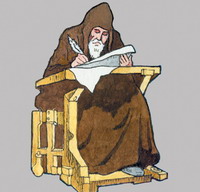 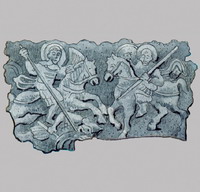 A stone slab in St. Dmitri in Kiev 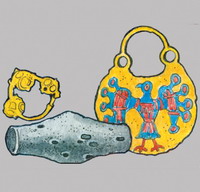 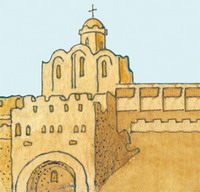 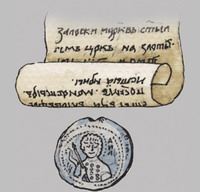 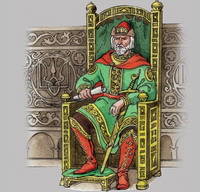 Prince on the throne 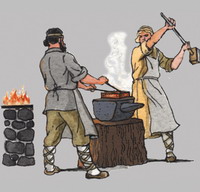 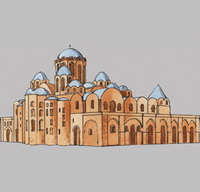