Despite intestine wars Kievan Rus Prince met 13 cent. rich and prosperous country. However, from the East was threatened by a new enemy - the Mongols, who in the Asian steppes formed a powerful state and began to conquer neighboring nations.

first trip of the Mongol hordes of Russians land in 1222-1223 he held this occasion pass without considerable damage. However, following raids that led Batu Khan had the Ruthenian lands to serious consequences. The most devastation suffered Kiev, and Chernigov Pereiaslavs'ka land. In the conquered territories of the Urals and Western Siberia to the Black Sea was created Mongolian state - the Golden Horde. Under her government faced and Rus-Ukraine.

1. Where, the first battle between the Mongols and Rus?

2. In what order bands Batu winning city in the Ukrainian territory? 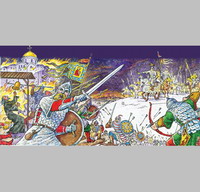 The defense of Kyiv from the Mongol-Tatars