In May 1648 started a national liberation war of Ukrainian people against Polish domination. It was led by Bohdan Khmelnytsky. In the results of the first battles were released significant portion of Ukrainian land. These areas confirmed the Ukrainian Cossack state - Zaporizhzhya Army. As the highest authority in this country belonged to the hetman, historians call it even Hetmanate. The territory was divided into troops Zaporizhzhya region, called the shelves.

Seeking allies against Poland in 1654 Bohdan Khmelnytsky was forced to seek assistance from the tsar. Subsequently, this led to full integration of Ukraine to Muscovy.

1. What was remarkable victory Cossack army in 1648

2. Near the bridge where the battle took place Cossack troops of the Polish Army in 1649-1652 years?

4. What city was the capital of the Cossack state during the Khmelnytsky? 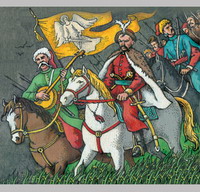 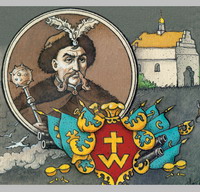 Bogdan Khmelnitsky, his arms and his church built near Chyhyryn 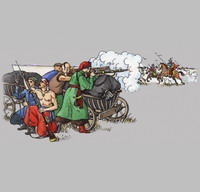