In the maelstrom of World War II Ukrainian lands were involved from the beginning - September 1, 1939, when German troops attacked Poland, which was under the rule of Western Ukraine. This event was preceded by a secret agreement the leaders of Nazi Germany and the Soviet Union, according to which the western part of the land had to sign to the USSR. Thus in Western Ukraine entered the Soviets. German War against the Soviet Union began June 22, 1941 After a year (July 1942) Ukraine was fully seized by German troops. The purpose of the invaders were conquering Ukraine, extermination of its population, making it lands on the provider of food and raw materials. On the territory of Ukraine was established network of death camps. Tens of thousands of people of different nationalities were killed in Kyiv, Kharkiv, Dnipropetrovsk, Rivne.

1. In what sequence was captured Ukrainian city during the Second World War? 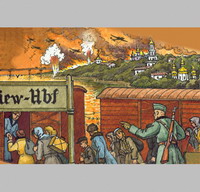 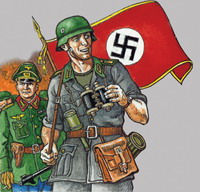