on captured German Nazis turned the entire Ukrainian territory Resistance Movement, which played an important role in the defeat of the invaders. At the beginning of 1943 the war was broken, and Soviet troops entered the territory of Ukraine. Never before have our land has been the scene of such brutal battles. Important for release of Ukrainian lands was a battle of the Dnieper.

November 6 was released Kyiv. In December 1943 began a general offensive of Soviet troops in Right-Bank Ukraine. In October 1944, the entire territory of Ukraine was liberated from the invaders. The war cost the Ukrainian people about 8 million lives. The memory of the participants in those bloody events commemorated 14 October - the day of liberation of Ukraine and 9 May - the day that millions of people is the Victory.

1. What territories are covered by the actions of the Ukrainian Insurgent Army and Soviet partisans?

2. In what sequence Ukrainian city was liberated from the invaders? 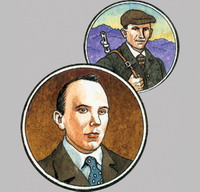 Leaders of the national resistance movement: Shukhevych and Stepan Bandera 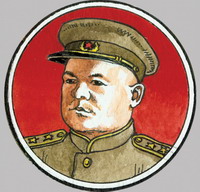 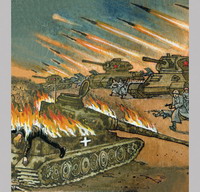 Fighting for the liberation of Ukraine from German invaders