§ 2. Eastern Slavs - the ancestors of Ukrainian in VI-IX centuries. (textbook)

Theme I. The emergence and development of Kievan Rus

§ 2. Eastern Slavs - the ancestors of Ukrainian in VI-IX centuries.

Upon learning this paragraph, you'll learn:

how was the settlement of the Slavsfinal stage of the Great Migrations;

as described by card settlement east,western and southern Slavs, and East tribes - ancestorsUkrainian;

East neighbors of the tribes;

features of ethnic and stateprocesses in the eastern Slavs in VIII-IX centuries.;

The task to repeat

1.   What is Migration? When and howit started?

2.   As happened during the settlement of the SlavsGreat Migrations?

3.   What do you know the origins of the Ukrainian people?

1.   Slavs underthe Great Migration. Migration, as you know, causedbig changes on the map of Europe. His part was the great migration of Slavs.

Greatmigration of the Slavs - ResettlementSlavic tribes from their ancestral home, located between the Dnieper andVistula, on land adjacent to V-VII centuries.

At the finalstage of the Great Migration in VI-VII centuries. central role in immigrationflows have played Slavic tribes and sklavyniv Ants. With RiversDnieper and the Vistula, they went to the Danube region. From there, these tribes began to makeregular attacks on Constantinople and the Byzantine possession in the Balkans, who have receivedthe name of the Balkan wars. After the first successful campaigns Slavs beganremain beyond the Danube, and at the end of VII century. almost completely mastered the Balkanspeninsula. 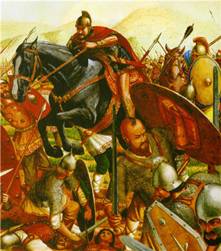 Battle of Slavs from the Byzantines

Byzantineby John of Ephesus tours of the Slavs in the Balkans

The third yearthe death of the Emperor Justin, and the state government moved cursed TiberiusSlavic people who went through the whole of Greece and across the country Fessalonitsi, and onThracian provinces. He received many cities and castles, burned, robbed andconquered the country, sat on it authoritatively, and without fear, as in his own, and withinfour years, until the emperor was busy Persian war and caused anall its forces to the East, the whole country was committed to its own devices Slavs;last took it and roztiklysya on it at the time appointed by God. They ...captured by the imperial and other herds, they live in, sit and robbed in Romeprovinces without worry and fear, killing and burning, they became rich, havegold and silver, many herds of horses and weapons. They learned to fight the war better thanRomans, [yet they] are simple people who dare not come out of the forests and grasslands anddid not know that such weapons, except for two or three wires.

1.   What are the facts about the campaigns of the Slavs in the Balkanslisted in the document? What information do you get them and what conclusionsdo?

2.   As the author refers to events whichsays? Why are you the same impression?

3.   Can you trust the author of the document? Chewposition he represents?

4.   Decide on a document that had the effect of the BalkanWar on the development of the Slavic community.

During the Greatmigration of the Slavs one of them remained in the Balkan peninsula, andsecond moved upstream the Danube and occupied the land near the Elbe (labs). Thereshe met yet another stream of immigration of Slavic tribes thatcoming from the territory between the Vistula and Oder (Oder) west. At the turn of VI-VII centuries.Slavs also actively promoted to the north and northeast, inhabit the earth,belonging to the Baltic and Finno-Ugric tribes. 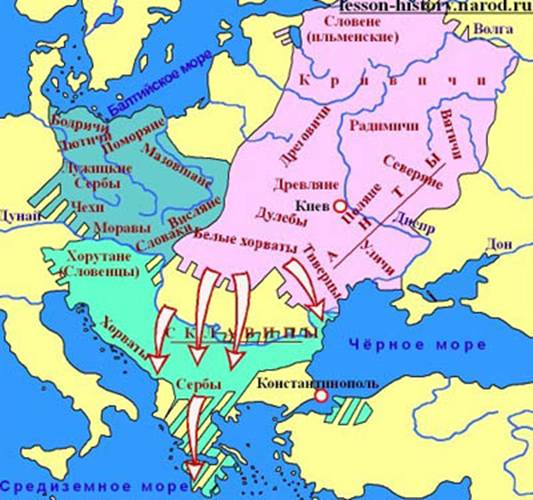 ResettlementSlavs took place in difficult conditions. In the second part of Article VI. thumpfor them was the struggle against nomadic Avars, who originally migrated from Asiato the Northern Black Sea, and then - on the territory of modern Hungary, wherefounded their own state - Avar khanate. Long-Slavic Avars Warled to the conquest sklavyniv Avars, exhaustion and then collapse antskohounion of tribes. Of the 602, the anti in the historical sources are not mentioned. Namesklavyny used quite often on the tribes, in VII-IX centuries. settledterritory of modern Ukraine. Consider what the term "sklavyny" over timetransformed into the "Slavs".

The resultGreat Migration of the Slavs was the formation of new regional groupingsSlavs who is customary to divide the eastern, western and southern.

2.   ResettlementTribal unions of Slavs in eastern Ukraine. In the VIII century. inEastern Slavs have tribal unions, which are reported in the Chronicle, "The Storypast years, "the monk Nestor. 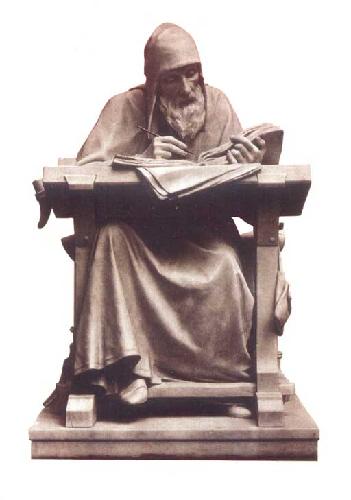 Nestor (? - After 1111)- Monk of Kiev-Pechersk Monastery. The compiler of "Tale of Bygone (temporary)years "- the oldest among the chronicles that have survived to this day. The name wasby opening its first sentence: "This is the story of Bygone Years, where she wentRuska land ... "Value" Story "for researchers is that it is a major,and in many cases the only source on the history of Eastern Slavs and KievanRuss. Nestor the Chronicler was able to link the history of the Old World,Russia launched an important role in world historical process. 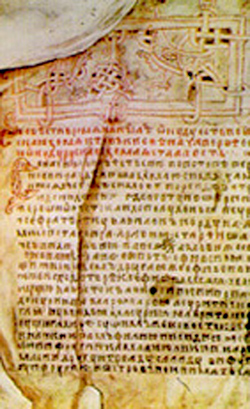 Cover "The stories of bygone years.

Chronicle - Follow a chronological record of historical events,made their contemporary. 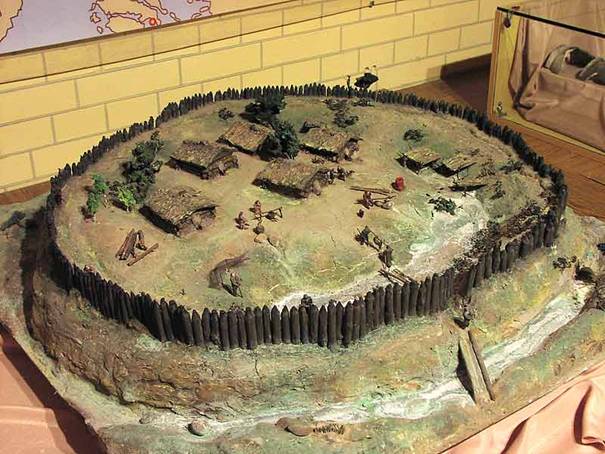 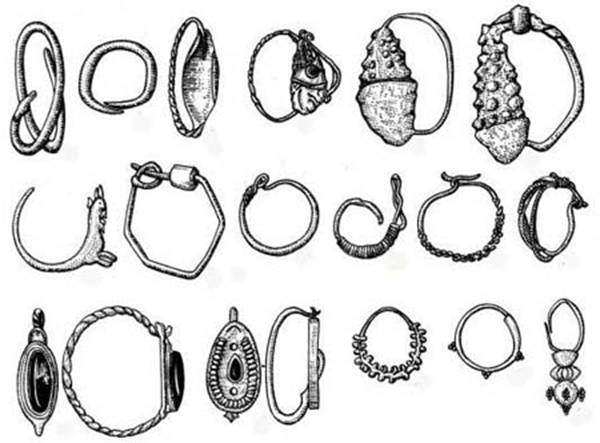 NarrativeNestor the Chronicler of the foundation of Kyiv

Polana lived in the samethe time, separately owned and their families ... and had three brothers: one had a name cue,second - and third Schek - choir, and their sister was Lybid. Was Kyi on the hill whereMill descent now, and cheeks sat on the hill now called Shchekavytsya and choir onthird hill, which prozvalasya Horevytseyu on it. And built in the name of Townolder brother, and called it Kyiv, and was around the town forest and forestgreat, and there caught animals, and they were courageous wise and intelligent, and were calledthey glades, glades from them until today in Kiev. 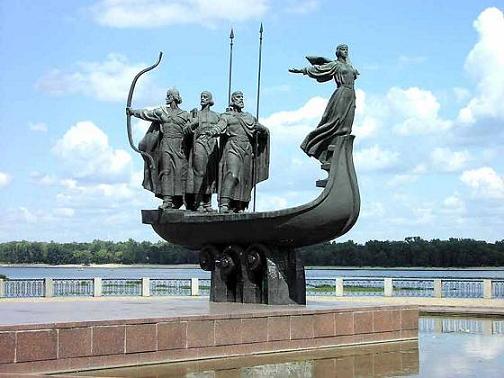 In the south,southeast and east of Turkic tribes lived Bulgarians and Khazars. Tribes Bulgariansend of Article VI. formed in their state Azov Great Bulgaria. In the middleArticle VII. it was destroyed by the Khazars. Some Bulgarians settled thereafter forMiddle Volga, which established a new state - Volga Bulgaria (in its territorycoincides with the boundaries of the modern republic of Tatarstan within the RussianFederation). 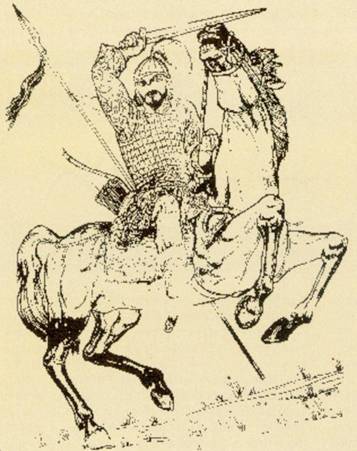 Another partBulgarian tribes, led by khan Asparuh, settled on the Danube and Cowith the local Slavic tribes unions created the first Bulgarian statekingdom. His appearance started the history of modern European stateBulgaria.

In the conqueredlands of the Khazars in the middle of VII century. formed state Khazar Khanate. In VIIIArt. they conquered the East Slavic tribal unions Polyany, Siveryany Radymychi andv'yatychiv and forced them to pay tribute.

In the Storyprevious years "are the story of a tribute Polyany Khazars. After the death of Kyi, Schek andHoreb, says Nestor, clearing oppressed by the surrounding tribes. And they foundKhazars them when they lived in a forest on the mountains and said: "pay us tribute."Polana then counsel and gave them to each family by sword. And it took the Khazarshis prince and his elders, and told them: "Here we found a new tribute.They asked them: "Where?" And they told them: "In the forest on the mountains above the riverDnieper. And they asked: "What gave you?", And they showed swords, and "saidKhazar elders: "bad CE tribute prince. We took her one-sided weaponie swords and guns so oboyudohostra, ie swords. C will play tribute tous and from other lands. " And all this came true, says Nestor, they said they do notfrom his will, by God's commandment.

Importantfor the development of the Eastern Slavs had that ran through their land one of themajor trade routes of the medieval world "with Varangians to the Greeks, whocombined the Baltic and Black Sea. 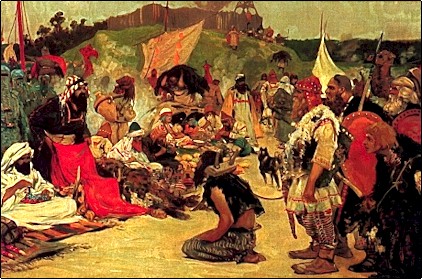 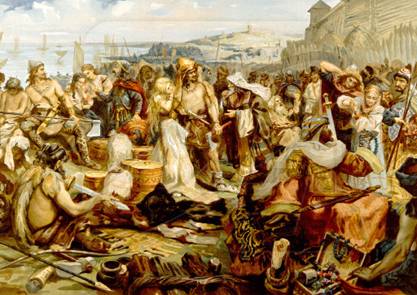 Ivanov. Trading in the eastern Slavs

Varyag (fromByzantine varanhy - mercenaries) Slavs called the ancestors of modernNorwegians, Swedes, Danes and Icelanders. In Western Europe they were called Normans(Northern people). These cruel and brave adventurers were hired to serveByzantine emperor and founded trading settlements in theSlavic lands accumulated in them and then sell transported to Byzantium(The Greeks), honey, wax, furs and slaves. 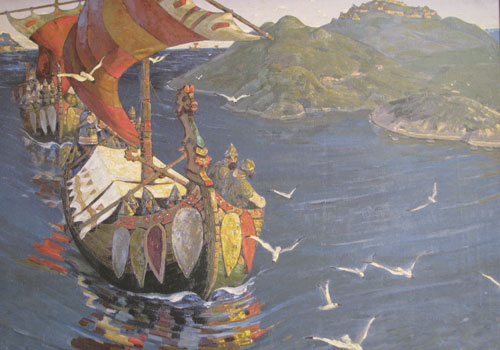 4.   Ethnic andstates in the eastern Slavs in VIII-IX centuries.

Ethnic Processes - These are processes that characterize the features of(National-cultural, linguistic, etc.) of any nation.

State-processes - These processesassociated with the occurrence of certain people in the state - the government system in whichorder in society, supported by special organizations andpeople - officials, guards, army and so on.

Long timeafter settling in the eastern, western and southern Slavs keptmany similarities in the ethnic field. In particular, some researchers believe thatwas long enough to understand all the Slavs one Slavic language. SimultaneouslyTherefore, pereselyayuchys tend to have inhabited the earth, the Slavs fall under theinfluence of local people. In the VIII-IX centuries. as in the east, and in other groups of Slavsgradually arose pohlyblyuvalysya ethnic differences between remote unionsSlavic tribes and the main core of its historic homeland betweenDnieper and the Vistula.

In the VIII-IX centuries. inEastern Slavs promulgated government formation process. As a result, unionindividual tribal alliances, new formation - Pedigree reign. Each of themhad its own territory. Modern science believes that these associations were elementsstatehood.

According to Arabauthors, on the lands of east there were three unions: Kujawy (landPolyany with Kyiv), Slavia (land Il'mens'ka Slovenes) and Artaniya(Rostov-Suzdal land, perhaps, the Black Sea and Azov ground).

It is believed that breedingPolyany reign in the Middle Dnipro region known to Arabs as Kujawy was the center,around which grew eastern Slavic state.

Conclusions. Becausesettlement of the Slavs in VI-VII centuries. over a wide area of Europe have three groupsSlavonic: eastern, western and southern.

In the ethnic development of the Eastern Slavsdefining remained the common heritage of historical homeland.

In the VIII-IX centuries. as a result of deploymentintegration processes in the eastern Slavs appear tribal principalities.

V-VII century .- Largemigration of the Slavs.

Make sure you remember

1.   Where located homeland of Slavs?

2.   As occurred with the Avars the Slavs fighting?

5.   What the East Slavic tribes paid uniontribute to the Khazars?

6.   Which of the principality, according toArab authors have existed on the lands of East?

3.   What you know about the neighborhood of Easttribes

Make a simpleplan to the story "Features and ethnic states in EasternSlavs in VIII-IX centuries. "

1.   The Byzantine emperor ConstantinePorphyrogenitus (912-959 years) wrote: "Zislov'yanylasya all our land and becamebarbarous ". Explain what he meant.