Upon learningthis paragraph, you will learn:

on the system board and the populationKievan Rus;

who were living in rural areas;

about the peculiarities of the Russians and citiesurban life;

1.   What were the characteristics of public andeconomic life of the ancient Slavs?

2.   What is a union of tribes and tribal reign?

3.   When the Eastern Slavs have tribalreign?

4.   How was collecting tribute in Russia byfirst dukes?

1.   The composition of the populationand control system Kievan Rus. By form of government Kievan Rus IX-X century. historiansdefined as "Mundane state." At its core was a fairly simple systemAdministration, formed on the basis of the wife of Kiev princes. Wife notwas the only host of the Prince. Elder men were advisors to the grand dukeKiev, formed a management apparatus, committed on behalf of the court on the ground andstyahuvaly tribute.

Out of the Storypast years, "the researchers got a lot of information about the ruling stratapopulation Rus IX-X century. Specifically, talking about the trip to Oleg907 Constantinople, the terms and Ruthenian Byzantine agreement 911, hereported that, besides the Great Prince of Kiev, in Russia were the leaders and the "lightboyars. Most historians believe that the local East Slavic Pedigreeprinces and chiefs, who conquered the Kievan princes.

A Tale of pastYears of fighting Prince Oleg Byzantines

In the year 907. DepartedOleg the Greeks, Igor in Kiev and left ... Oleg and demanded to give an annualRussians pay tribute to the gardens - first in Kyiv and then in Chernigov, in Pereyaslavl,and Polotsk, and Rostov, and Ljubech, and other towns - because in those towns were sittingprinces, under suschi Oleg (Oleg dependent).

In the year 912. SentOleg his men to bring peace and to conclude an agreement between the Greeks and Russia. Thenhe was saying: "The second agreement, which was held at the same tsesaryah, and LviAlexander, we men of the people of Rus - Carl, Inheld, Farlof, Vermud,Runav, Hudy, Ruald, Karp, Frelav, Roire, Aktevu, Truan, Lidul, Fost, Stemyd -sent from Oleg, Great Prince of Rus, and all that is under his handboyars light to you ... tsesariv Greek, to maintain and certificationfriendship that unit many years was between Christians and Russia, at the request of our princesand at their behest, and from all that is under his hand, Oleg sheer Russes ... "

1.   What the title refers to the chronicler of Prince Oleg?

2.   On that ruling groups that existed in Russia,but the Great Prince of Rus, mentioned in the chronicles?

3.   What city existed in Russia at the beginning of X century.according to Nestor? Find them on the map.

Princes in theirboard relied on the tribal councils of elders, which the chronicler calls "elders."With stories about the events of Nestor, the 945 can see that Prince derevlyanskyyMal took the decision to negotiate with the Kiev Princess Olga, pre-consulted with elders of the earth. They also were responsible forIgor murder, because the decision of this prince Fig probably agreed with them. 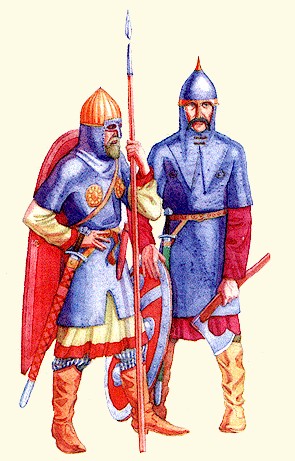 It is believed thatremembered in the annals "boyars light" - is rich, wealthy people who formedrodopleminnoyi on East European nobility and combatants of the Grand Prince, whichsettled on the ground and became large landowners.

First tributeKyiv collected in favor of the Eastern Slavs in the form polyuddya. Around the secondhalf of X century. it lost its value. In cities and states weregovernors of the Grand Duke of Kiev. This made unnecessary the annual Princedetours lands. Now governors collected tribute, and handed it to Kyiv.It is believed that the reign of Prince Igor polyuddya become a specialtax that Kievan princes tried to charge more than the established standard. Tribute,says Nestor, going to Russia on a house - "smoke". Majoritypopulation of Kievan Rus, which obkladalosya tribute were free peasants, or'People' and artisans. There was also a few layer of dependent people or Chelyadyn.

Archaeologicalresearch has allowed historians to learn about what the village had the appearancesettlement in Russia. They were located in areas with favorable foragriculture natural conditions. These were neukriplenipeasant village of 30-50 households. Private estates were placed at random withoutcomply with any plan. This suggests that the inhabitantssettled where they pleased, trying not to change the nature andadapt to it. 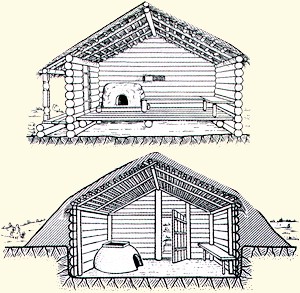 The compositionpeasant estates were residential and commercial buildings. Her master leadown independent economy, with almost everything for this necessary.Dimensions allow housing was assumed that peasant family consisted, asrule of six persons. In estates, family owned household itemslivestock, tools for cultivation of land and harvesting.

Peasantmanagement of one or several neighboring villages united in ruralterritorial community, whom they called "line upon" or "peace." Members of the community wereRelated solidarity, together responsible for the payment of tribute and committed to itsarea crimes.

In the life of the easternSlavs agriculture played an important role and particularly enjoyedrespect. It is not our main cereal crop they called "rye", fromthe word "live". Pagan rituals and the whole cycle of annual pagan holidaysEastern Slavs reflected deep-rooted tradition of cultivation of land consideredsource existence.

Living in separatecommunities had strong ties and lived separately. According to the chronicler,for marriages ulashtovuvalysya special "games were between villages. Partly formeetings of representatives of certain communities were often pohosty which were commoncemetery. There were religious holidays, periodic auctions, collecting tributesetc..

In IX-X century. Ascertify the archeological data, in Russia there are many cleanedof forest and arable land was relatively large population density.

3.   Cities and urbanlife. The emergence of the oldest urban settlements in Russia include historiansAnd for the third quarter of thousands, if among the Eastern Slavs unfoldedthe state and ethnic processes. In "Tale of Bygone Years" Nestor the ChroniclerEast Slavic settlement called "Grad". Specifically, talking about the catch,Tyvertsi he writes that "they sat on Buhovi and on the Dnieper River to the sea, and yepgrad them and to this day. According to researchers, were East Slavic gradadministrative and religious centers unions tribes in the border fortressesareas. Their remains were found by archaeologists in Kiev, Chernigov, village Zymnenear the city of Vladimir-Volyn, Pastoral village of Cherkasy and otherplaces.

Hailstones wereoriginal tie, from which under favorable conditions, have the city. Butmost of them never became cities because they had been burned, or nomadresidents left.

Annalisticevidence of the existence in Russia for a large number of cities in the IX century. confirmedin the works of contemporary Arab authors. They always remember the greatcities and even suggest their names. Mentioned Arabs Eastern Slaviccity of Cuiaba most researchers equate with Kyiv. Most cities in Russiabegan with fortresses, castles. When the walls settled artisans and merchants, andwithin the walls were princes and military wife who could, if necessaryprotect the city from enemies. Varyag called Kievan Rus IX-X century. "Countrycities (locks) ", or" Hardaryky.

Cities werecenters of handicraft production and trade. But their residents toRussia, as in the cities of contemporary Europe, combining studies of trade and craftagriculture. 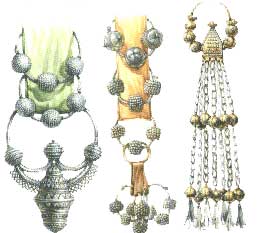 City populationRussia was heterogeneous in its composition. Typically, it was divided into citynobility and urban lower classes. The first group of the population belonged to the princes, boyars, priestsprincely warriors, wealthy merchants and wealthy craftsmen. The second group were bourgeoispoor artisans, small traders and servants.

Conclusions. In IX-X century. established in Russia by the state government,where the main figure was Prince, who led the country through itswife.

In the population of Kiev Rus IX-XArt. formed the ruling class, who were the Grand Duke of Kyiv,tribal princes, boyars and princes arms.

The vast majority of the population of KievRuss lived in villages and engaged in agriculture.

Cities of Kievan Rus were importantsocio-economic, political and cultural center. Inthroughout history they have had close contact with farmproduction, were centers of handicrafts, trade, government and management.

IX - firstX .- half century in Kievan Rus, according to the chroniclers, there were 16 cities.

2.   Name the representatives of the ruling classpopulation Rus IX-X century.

3.   In IX-X century. most townsKievan Rus were a village or city?

6.   What city, according to the chronicler, therein Russia in the IX - the first half of X century.?

3.   As development took place in the cities of Rus IX-XArt.?

4.   Explain how you understand the conclusions toparagraph.

In twoSimple plans record features of life in villages and towns of Russia in IX-XArt.

Questions and tasks for generalization on "Emergenceand development of Kievan Rus "

1.   Make a list of important historical eventsRus IX-X century. That you consider most important. Justify your choice.

3.   How has the creation of their own stateKievan Rus in the history of Eastern Slavs?

4.   Determine the value "Tale of Bygone Years"Nestor the Chronicler as a historical source about the life of the Eastern Slavs in the IX-X century.Give examples of what can be considered a legend chronicles and historicalfacts.

5.   Perform tasks on a historical map:

1)  Follow as varied territoryKievan state from the first dukes to end the reign of Sviatoslav;

2)  compare eastern settlement areaSlavs of Kievan Rus to the borders, the 972;

3)  name the territories and alliances Easttribes that were annexed and conquered Kievan princes;

4)  show on map basic hiking KievPrinces in the IX-X century.

6.   Why do you think it played a role Kyivcenter for the Eastern Slavs in one state and became its capital?

7.   Check the chronological sequenceadministration of princes and name the years of their rule.

9.   What do you think was the main contributionEach of the great princes of Kiev in Kiev Rus state building?

10.      What are facts that show an increasepower and international prestige of Kievan Rus IX-X century.

Tests with the theme "The emergence and developmentKievan Rus'

1.   In the second part of Article VI. Slavs wereSuppression of nomadic:

2.   Decide which of these EastUnions tribes inhabited the territory of modern Ukraine:

4.   In 860, according to Nestor the Chronicler,Prince Askold committed military campaign against:

a) the Khazars, b)Bulgarians in) the Byzantines.

5.   Murder Prince Askold and capture Oleg princelygovernment in Kiev was:

6.   Prince Igor was killed in autumn, during the 945rebellion:

8.   968 In the absence of Kyiv Prince Svyatoslavwas besieged nomadic tribes:

a) acne b)Pechenegs in) the Khazars.

10.      Council of Elders of the tribes of Eastchronicler called:

12.      In IX - the first half of X century. in KievRussia, according to the chroniclers, there were: