1.   Theater. EndXVI - in the first half XVII. appeared in the Ukrainian lands schooltheater. In Slavic-hrekolatynskyh school students be taught andproclaim poems and speeches. Teachers have written poems in the form declamations of secular and spiritual themesand the disciples were with them in schools at Christmas, Easter, green and other holidays,in churches during ceremonial meetings so honored guests. Artists cameand recite pieces of work, share a common theme. Then reciteworks were in the form of dialogue. In the 30's XVI century. Lvivbrotherly and Kiev Lavra schools was established and school dramatheater.

Drama - Literaturnoteatralnyy work, builtin the form of dialogue without the author's language and is intended for stage performance.

The first of the famous monuments of the Ukrainian Easter Dramais printed in 1631 teacher's work L'viv Brotherhood School Ioanykiya Volkovich "Reflections on the punishment of ChristOur Savior ". The school of theater at the Kyiv MohylaCollege programs contributed to classroom poetics and rhetoric. In letters andwork of his teachers there are mentions of school plays, performed by studentsCollege.

In the first half XVII. were first mystery - Religious drama on biblical subjects. So, at this timein Volhynia and Galicia were created "Word on the disturbance (destruction) of hell."Mysteries were performed on the streets of cities and towns hoofer in the days of churchholidays. Between acts mystery, drama school and later rozihruvalysya sideshow. Inepisode of the comedy of everyday life has taken a significant place improvisationie execution without prior preparation.

Sideshow - Shortepisode mostly humorously-comic character, which was performed in the intervalsbetween acts of serious drama. 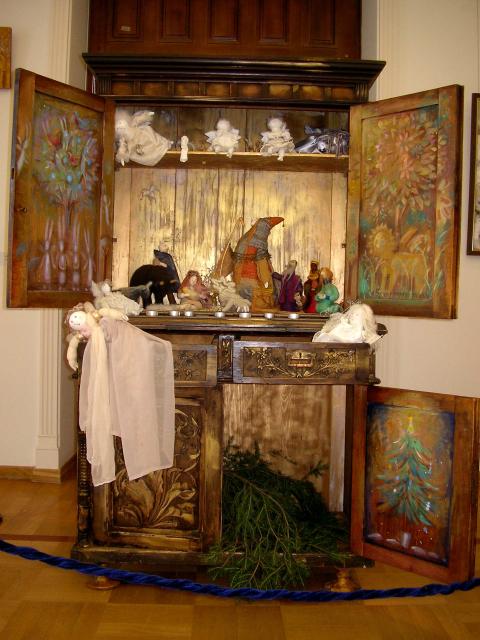 In the XVII century. in Ukraine has gained popularityChristmas puppet theater - den. Performers traveledwith a special trunk, divided into two floors, with side door, throughthat "ringleader" dolls. On the top floor played scenes associated with Christmas,and at the bottom - tales, legends, comedy, domestic scenes. Puppet Mastervypylyuvav wood and rozmalovuvav. Performers led them with spears,spoke and sang for them. His aides choir sang and played musicalinstruments. Growth in popularity vertep theater students helped Kiev-MohylaCollege, who went with den crowded places, homes and earned himself onlivelihood.

2.   Music. Reflections high level of spiritual culture of the Ukrainian people were achievingin musical arts. In the song of creation, as in the previous century, werecommon Ritual, lyrical, humorous, epic, dancesongs. In the epic genre has generated such deeply dramatic songs aboutTatar raids as "Over the River fire burned." The peculiar songstories about important events are historical songs. Thus, the CossackUprising 20-30's XVII. said in the song "On Sula,Pavlyuk also about Yatska Ostryanytsi.

Great skill attained partes (many) singing without music and musical accompaniment. Hiswere used in Orthodox churches, as opposed to the Catholicchurch service, accompanied by playing the organ. Instead of "signs" or"Hook" for writing religious tunes came notation. Singing to notestaught by experienced musicians and church choirs Regent.

There were new genres of secular music. On the basis of poeticalpoetry composed cants - Church and secular songs fortryholosoho ensemble or choir. There were solemn, living room, instructive, moralistic,humorous, satirical and other edgings. Also the development of the solo song with accompaniment.In this genre, unlike Kant, to show the inner world of man, hislife and attitudes to various phenomena in society. The development of the genre of instrumentalmusic is a music shops that existed in some cities, likecraft. The main purpose of their creation was the satisfaction of household needspopulation in the music - accompaniment to dances at public celebrations, playing at weddings,christenings, funerals, etc.. With folk music shops formed a professionalmusic. It created samples of instrumental music, emerging characteristicThe ensemble of the Ukrainian national instrument, improved gamemany instruments.

3.   Architecture. From the beginningXVII. in the Ukrainian architecture more clearly applicable elementsEuropean style BaroqueThat in MiddlePrydnipovya combined with local traditions. As a result, createdconditions for the original architectural style, called Ukrainian Baroque. Yes, the Baroque features to the architecturemanifested in a wooden church building houses in the form of G, elongationits proportions and replacement tent on top of the pear-shaped dome.

Among the outstanding monuments of the first halfXVII. includes Ukrainian wooden churches, in particular churchParaskevi in the village. Radruzh and Elevation Church in Drohobych.Attractions of contemporary church architecture is brick churchNicholas Prytyska in Kiev (1631) cathedralMolchynskoho monastery in Putyvl (First half of XVII century.) Intercession Church in Sulymivtsi (1622-1629 biennium), Bloc church in Lviv (1644) and others.

In the first half XVII. in Ukraine, as before,built a lot of defensive structures. On the boundary of XVI-XVII centuries. changed theirappearance. Instead of the wall began to build magnificent castlesmagnate palaces, surrounded by bastions.

Bastion - A system of fortifications of the fortress walls and forts oncorner, surrounded by a moat, four-or pentagonal shape. 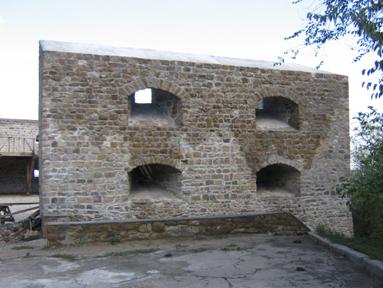 The most interesting examples of combining into one whole palace andbastion fortifications erected during this period are considered locks in Zbarazh andPodgortsah. New features also appear in city planning. Builded BrodyStanislaw, polonium are inching characteristic of an earlier erachess grid arrangement of streets with bastion fortifications.

In the first half XVII. bysupport to the Polish authorities in Ukraine were built Catholic churches. Yes1610 in Kiev at the hem large Dominican church built, and aroundDominican monastery building was erected. Outstanding architectural monumentthen it is Bernardine church in Lviv, built in 1600-1630 biennium Tochurch adjoining the monastery buildings, which form a closed court. Ofthe advent of the Jesuits in Ukraine is concerned the construction in 1610-1630 biennium churchJesuits - The first in a temple in the early Baroque. In thisstyle built in the 1642-1644 biennium Lviv Church of Candlemas. Interestingarchitectural monuments of that time the city is Boim Chapeland Kampianiv - Ancestral tombs of rich merchant families. Their wallsare rich in architectural decoration, decorated with carved decorativecompositions, executed in the Baroque style.

4.   Visualart. In the first half XVII. inUkrainian Fine Arts continues the progressive development of those genres,formed in the previous period. Its main species remain wall paintings and iconography.

The preserved to the present day paintings, executedbefore 1620 on the walls of the church of the Holy Spirit in the village. Potelich. Inpaintings marked a peculiar combination of traditional techniques with new realisticfeatures. According to researchers, "Passion" series of paintings potelytskyh (imagesuffering of Christ) as though echoes the ideas of the protestation of Job Boretsky, where hedescribes the anguish and suffering of the Ukrainian people and encourages him to stability instruggle. Until now preserved frescos in the church Vozdvyzhenska Drohobych.Their feature is the combination of biblical scenes and decorative patterns oflocal colors - periwinkle, cornflowers, chamomile, etc..

During this period, improved techniquecarving in stone and wood. Ornaments dominated plantmotives. This plant has a certain image content. Yes, common inornaments image of vine and grapes in Christianity known as a symbolfaith. In the second quarter of the XVII century. vegetation patterns in the memorable carvingbegin to give way to various masks, emblems and more.

Attractions portrait carving tombstones that time isportraits. Their composition is complicated, attempts to transfer advanced featuresportretovanoho character. This is the generation of Kiev Voivod tombstone of AdamKysil set in his ancestral tomb-church in the village. Nyzkynychi in Volhynia.In full growth, shown in knight armor and Stanislaw Jan Zolkiewski theirtombstone in the church in Zhovkva.

Further development of the arts engravingsassociated with the spread of its secular genre. The first completely secular printsappeared in 1622 as illustrations of the "Verses on the pitiful needs ... HetmanPeter KonashevychaSahaydachnoho "written by K. Sakovich. These include imageHetman on a horse print "Getting Kafi. In "Teaching Gospel"(1637) contains an engraving of "The Parable of the rich and death", which depicts the workpeasants. Distinguished engraver was master Eli which of1636 working in Kiev. His best works are considered to prints"Formulary" Peter Graves and "Lives of the Fathers Caves.

In Ukrainian art genre takes top spot portrait. Monuments portraiture Naddniprianshchyna thislittle time remained. New ideas about its development in the first halfXVII. allow portraits of masters of the Lviv school. Brushes Nicholas Petrahnovycha attributed to a portrait of the daughter of Lvivmerchant Barbara Lange, considered the most attractive female charactersof contemporary Ukrainian art. Famous painter FedorSenkovych is the author of portraits of representatives of Ukrainian community, as well asportraits of Polish nobility - Lviv age Stanislav Mnishekand pidkantslera Thomas Zamoyski. The distinguishing feature of these and otherUkrainian portraits of this period are striving together with external featurestransfer features of character and inner world of the character.

- The development of music genres came partes(Polyphony) singing, Kant, and solo songs from the soundtrack, instrumentalmusic.

- In the style of architecture was initiated by UkrainianBaroque.

- A new type of defensive structures, instead of fortresses and castles,became palaces of bastion fortifications.

1. What genres of theatrical art developed in the firsthalf XVII.? 2. Where and when Ukraine started school dramaand theater? What is a sideshow? 3. What music genres have evolved in that timeUkraine? What partes singing? 4. What is manifested in Baroque featuresUkrainian architecture? 5. What new types of defensive fortifications appeared at thistime? 6. What are the main genres of the Ukrainian fine art of the first halfXVII.

10. End of Table "The development of Ukrainianculture in the first half of XVII century. "launched by material § 14.

11. Visit a local art museum and preparenotice of works of Ukrainian art of the first halfXVII. Who is in his exposition.

Generalization on "Ukrainian lands in the first half of XVII century."

1.         Foldlist of events from the history of Ukraine in the first half of XVII century. that you thinkmost important. Justify your choice.

3.         Nameprominent historical figures of this era. What do you see their contribution to historyUkraine first half XVII.

1)         What newUkrainian territories were inhabited by the middle of XVII century.?

2)         ShowUkrainian lands, which in the first half of XVII century. changed their stateaffiliation.

3)         Where thisperiod Zaporizhzhya Sich was located?

5)         Showon the map where were the most important historical events of this period.

5.         Foldcomprehensive plan "Features of socio-economic and political conditionsUkrainian in the first half XVII..

8.         What doyou think were most important achievement of Culture of Ukraine the first half of XVIIArt.? Explain your opinion.

Tests on "Ukrainian lands in the first half of XVII century."

1.         Whichis a list containing the names of magnates who had large in mayetkostiUkraine?

5.         Specifychronological limits of the heroic days of hiking the Ukrainian Cossacks.

8.         When the DietCommonwealth adopted a document that abolished in perpetuity all the rights andRegistered privileges which they enjoyed as a reward for services provided "Our ancestors ...»?

10.       Who wasauthor of the outstanding work of polemic literature "Trenos?

Encyclopedia on page "Ukrainian lands in the first half of XVII century."

1632 - Start of legalization in the Polish Orthodox ChurchCommonwealth

1638 - Adoption of the ordinance troops Zaporizhzhya