Theme V. Ukraine at the end of XVIII - the first halfXVIII century.

1. "Eternal Peace". First Crimean campaign. Signing BahchisarayskogoPeace significantly changed the balance of power in Western Europe. He unleashedhands of the Turkish Sultan for the latter, as it turned out, a powerful attack onEurope. The culmination of this offensive was the siege of Vienna in 1683 Onassistance went to Vienna Polish King Jan Sobieski of the 25-thousandth army, inwhich were Ukrainian Cossacks. The rapid impact of Polish hussars in Turkishcamp forced to flee from the last battle. As he wrote the Polish king of RomePope: "We came, saw, God conquered." 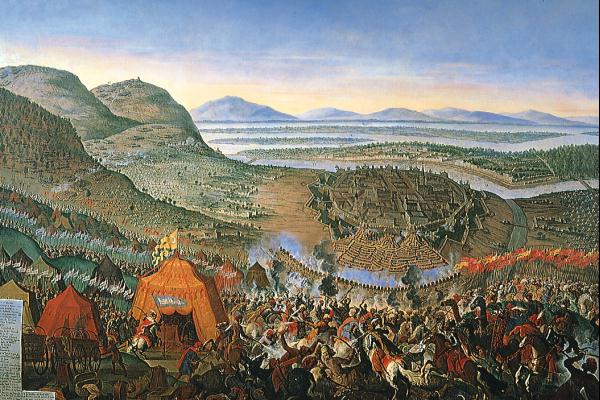 After this victory Poland joined the Holy League(Rome, Venice, Austria), which led the fight against the Ottoman Empire. AlsoPolish government went to the reconciliation with Moscow, to confirm the boundariesestablished by Andrusovo armistice, and to engage Moscow in the fight againstTurkey. May 6, 1686 inMoscow between the Commonwealth and Muscovy was signed "Treatise on the eternalPeace, according to which:

- Left Bank, Kharkiv and Kyiv with surrounding areas recognized byMuscovy and the majority of the Right Bank (North Kiev and Volhynia) - forPoland. Muscovy also recognized by Poland skirts, and then if vidvoyuyeit in Turkey.

- Poles are committed to ensure the Orthodoxpopulation on its territory free of religion.

- Russia and Poland entered into a joint military alliance,against the Ottoman Empire and Crimean Khanate.

In fact, "Eternal Peace" 1686 made voidagreements with Turkey, signed by both states before. For Ukraine, the agreementmeant legalization at the international level of its division into two parts. Thereforeacted against the agreement Samoylovych hetman, but all his appeals to the king wereignored.

After the conclusion of "Eternal Peace" for Moscow's prevailingfavorable conditions for intensification of the struggle for the Black andtermination of the Turkish-Tatar invasions. With this purpose in 1687 wascarried out a joint raid of the Crimean 150,000th Russian and 50000thCossack army headed by Prince Golitsyn V. (a favorite of Queen Sophia) andHetman Ivan Samoylovych. Trip ended with complete failure. Blameput Samoilovych that became a pretext to remove him from the Hetman. 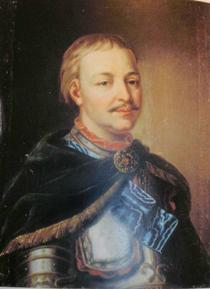 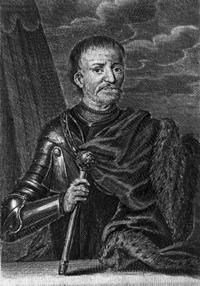 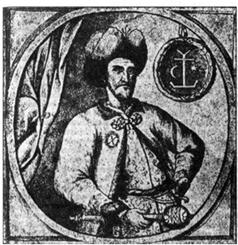 Mazepa was born around 1640 inwith. Mazepintsy near the White Church in the family Ukrainian nobleman. YouthMazepa Natsionalnovyzvolnoyi occurred in years of war and ruins. He receivedexcellent European education at the Kyiv Mohyla and Warsaw JesuitCollege. He served at the court of the Polish King Jan Kazimierz, fulfilling importantdiplomatic missions. He studied gunnery in France, Germany,Holland and Italy. Subsequently found himself surrounded by Hetman Doroshenko and D. I.Samoilovych. Visiting Moscow on official business, has developed close relationships withinfluencing an officer. All this was key to the success ofHetman's office.

At this time adopted a new Ukraine-Russian deal- Kolomaksky article. Key provisions of the contract:

- Declarative confirmation 30000th CossackRegistry, the hetman of rights and privileges, and elders (including the release of estatesfrom state taxation).

- Prohibition Hetman change its general foreman"Government" without the permission of the king.

- Hetman forbidden independentlydiplomatic relations with other states, and he was obligedobserve "Eternal Peace" with Poland (in fact he was not supposed to try to returnits authority under the Right Bank).

- Hetman was obliged by order of the king to sendCossack troops against the Crimea and Turkey.

- The cities of Kyiv, Chernihiv, Pereyaslav, Nizhyn and Oster asstill housed Russian magistrates of the garrison, and in the capital of the Cossack- Baturin Russian rifle regiment to control the hetman.

- Introduction of a special article to explainRelations between Moscow and Hetmanate State: banning the "voiceyspuschat "that? Molorosiyskyy hetmanskoho rehymentu land, but only to say thatit is part of a single state tsar.

The news of events in Kolomak contributed forunrest throughout Hetmanate. Cossacks and peasants attacked the estates officerssometimes stretch the most hated. Immediately after the election of Ivan MazepaHetman, he moved to suppress the uprising. New Hetman called populationdo not mob rule and promised to stop abuse of elders and abolishes woundSamoilovych for taxes. The mutiny was suppressed.

3. Continuation War with the Ottoman Empire. SecondCrimean campaign in 1689 Azov campaigns of 1695-1696 biennium Oncecertain stabilization in Hetman, Ivan Mazepa had to participate in military actionsagainst the Crimea. First it was necessary to build "small towns" was over Samara andpopulate them. These "towns" had become a reference point for new offensiveCrimea and at the same time protect against Tatar raids Hetmanate. Constructioncaused the conflict to Zaporozhye. To resolve it, Ivan Mazepa sent to Zaporozhyethousands of gold.

Spring1689 the Second Crimean campaign led by Mr. Golitsyn and I.Mazepa. One hundred thousandth of the Russian army Slobodskiy regiments moved to Crimea.By joining forces, the hetman shelves. Tatars forcing retreat,army approached the walls Perekopa. However, due to lack of water and food to go deep intoCrimea, Golitsyn had the courage and turned back. Actually ended marchfailure.

Later Ivan Mazepa, together with the officers arrived in Moscow tointroduce kings John and Peter. At this time there was a palace in Moscowcoup of supporters of Peter. Mazeppa realized that he couldget rid of mace, and right away went to Peter to confirm hisloyalty and gain confidence. 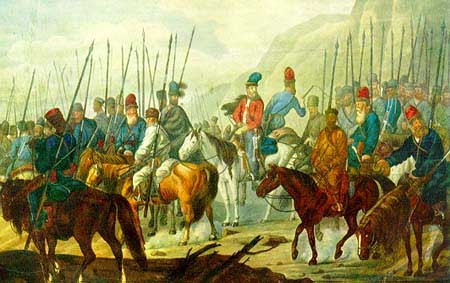 Cossacks, the trip to Crimea

At this time the war with Turkey and the Crimea continued.During the 1690-1694 biennium hetman regiments participated in campaigns in the regionlower reaches of the Dnieper and Ochakov. Progress in fighting difficult events in Zaporizhia.Antyhetmanska opposition led by Peter Ivanenko (Petryk), so there wasof officers opposed the policy of the hetman.

CrimeanKhan admitted Patrick Hetman and gave him help horde. Patrick supportedZaporozhye rabble, which declared its hetman. During the years 1692-1693 he madeseveral hikes in Hetmanate, but all were unsuccessful. The population in itsMost are not responded to his appeals. In addition, the horde took care onlythe opportunity to yasyr. This Mazepa could relatively easily to reflectattacks, and simultaneously curb the opposition against it.

Previoustestifying experience - to get the Crimea, should control the BlackSea. So in mid-1690's of Peter was the plan of war with Turkey, which providedaction simultaneously on two fronts: at the mouth of the Don, to take the fortress Azov, and inDnieper. Peter first trip in 1695 was unsuccessful in Asia byno fleet. Turkish garrison fortress received all necessary supplies andreinforcements by sea. Meanwhile, Mazepa's actions on the Dnieper were more successful.Hetman troops managed to capture Kyzy-Kermen and Taman.

Early1696 Tatars Petryk made another trip to Hetmanate but werebroken near Hadiach. Then Patrick for a while became hetman "khan"Ukraine - the territory between the Southern Bug and Dnieper.

That same year,Peter together with the Cossacks acting hetman James made a second LyzohubAzov campaign and the support of newly-built fleet was the city. Militarythere were steps near Ochakov, but take it failed. The war with TurkeyDrawing was, which formed a heavy burden on the population Hetman, which wasforced to hold the Russian army and Cossack regiments offer.

In 1699Allies of Peter, Holy League, made peace with Turkey in Karlovci. In thisagreement, particularly Poland regained skirts.

July 301700 between Russia and Turkey was concluded peace of Constantinople, byAsia which Russia received 30 years and part of the Azov Sea. ButParties are committed not to build fortifications on the border of Crimea and Hetman.Cossacks abandoned fortress-Kyzy Kermen and Taman, but qualified to performtrades to the seas.

Usingwar against Peter Sich fortress built on stone gulf, forcontrol over the Cossacks.

In the social and economic policy hetman made majorbid for Ukrainian Cossack officers and nobles, trying to convert them toprivileged social status. Mazeppa boosted big Hetmanand monastic tenure arrangement serfdom for the peasants (two daysweek). Over the years, Hetman he published over a thousand of universaltransfer officers, monasteries and large merchants in possession of tens of hundreds of villagesthousands of peasants. The hetman had about 100 thousand peasants in Ukraine and 20 thousand farmersin Russia. The consequence of this policy is to enhance all forms of exploitation of peasantsCossacks and the townspeople, the aggravation of social contradictions in the Ukrainiansociety. Also made a census Mazeppa Cossack state, so utrudnyvshythus the transition to it from other social classes.

Getting possession of settlementrulers, nobles and monasteries are often forced to perform various Cossackduty, they wrote out of the registry, turned into subjects, withholding of land(Beginning in 1730 malozemelni were landless and 40%). They hadmake binding gifts officers (determined by spectral), give money and food formaintenance administration, mail, schools, etc..

However, military needs demanded the existence of effective militaryCossack troops. In 1698 Cossacks were divided on wealthyperform military service (elective) and insolvent (helpers) who have had helpelected in farming. The same division was introduced and subsequentlythe Slobidska.

One of the most important areas of general publicPolicy of Ivan Mazepa was kulturnoprosvitnytska activity. In developmentUkrainian education, science, architecture, literature, typography Hetmaninvested huge sums of state military treasury and its own fundsrightly believing that only in this way Ukraine can be compared with Europeanstates. Telling is the fact that only under his direct supervision andleadership sporudzhuvalosya 12 temples. By Hetman Mazepa was restoredmany ancient temples of Middle Ages. Mazepa contributions to the development of architecture andConstruction was so important that the architectural style of that time researcherscalled "Mazepa Baroque. 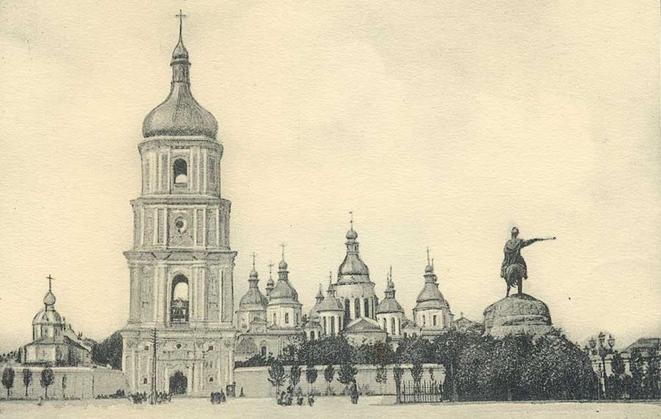 Many new buildings appeared in Kiev. In 1690new building was built Kiev-Mohyla College in 1698Fraternal Epiphany church convent and bell tower of the cathedral Sofievskaya to1695 - Walls surrounded the new Kiev-Pechersk Lavra.

Another realm of cultural activities Mazepa - Printingright. Publication Mazepa era were one of the best Ukrainian knyhodrukiv.Incidentally, the hetman was probably the best bookstore in Ukraine and obdarovuvavbooks in this library monasteries, churches and individuals. No less thanchurches and monasteries, took care of Mazeppa Kyiv Mohyla College, contributingits transformation in 1701 at the academy. In 1700 Ukraine hasestablished a new institution - Chernihiv Collegium.

According to researchers, such a deliberate and comprehensivecultural activities of Ivan Mazepa lets talk about it not just aspatronage, and as planned visionary public policy.

- In 1687 new hetman Ivan Mazepa elected.Darts he received at a time when Moscow was persistently by statecreation of the empire, and the autonomy of the Cossack state not included in its plans.

- In his carefully Hetman I. Mazepabelonged to the king's power, even strongly helped reform undertakingsPeter I.

1. When between Muscovy and the Commonwealth were made"Eternal Peace"? 2. Under what circumstances was the Hetman I. Mazepa? 3. What wereIvan Mazepa policies? Whose interests he protected? 4. What is the purpose and resultSecond Crimean campaign? 5. What were the results of Azov campaign?

6. What factors influenced the conclusion of "perpetual peace" betweenMuscovy and the Commonwealth? How does this event impact on the historical fateUkraine? 7. Describe Kolomaksky Article 1687 Identify their differencesfrom previous contracts. 8. What do you think, or contributed to economic policyHetman Ivan Mazepa his popularity among the peasants and Cossacks? 9. How Affectedposition on Moscow's war with Ukraine Turkey in 1687-1700 years?

12. Due to Ivan Mazepa was able to stay in power inconditions of the Palace coup in Moscow?