1. What policyRussia conducted on the Left Bank Hetman in the first half of the.?2. Name the greatest performancesagainst Russian domination of the Left and Slobozhanshchyna in the first halfEighteenth century.

1. Restoration Hetmanate 1750 After the death ofD. Hetman Apostol in 1734 was banned election of a new hetmanUkraine, and all power was transferred in Hetman Hetman's government rule,which strongly limited the rights and prytisnyav Cossacks. The population Hetmanatemature discontent.

Hope to improve the situation were associated withclimb the imperial throne of Peter and daughter Elizabeth. Suchexpectations based on the fact that among the entourage of the Empress were manyUkrainian, and Oleg Razumovsky was her favorite.

Soon expectations have come true. ChangesHetman touched and Sloboda Ukraine, were caused not onlyEmpress special relationship with their surroundings. This pushed asexternal circumstances (threat of war with the Ottoman Empire, Prussia, and Ukrainianlands were the source of human and material resources) and forcing socialvoltage.

Already in 1742 restored the Kyiv metropolis. In1743 removed innovations in Sloboda Ukraine.

While the empress in Kiev (1744)appealed to her superiors for permission to elect the hetman. Empressnot denied, but gave no specific commitments. According to the orderElizabeth in March 1750 Gluhove expanded in officers' council electedHetman brother Cyril O. Razumovsky (1728-1803). 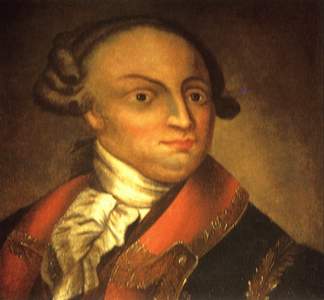 Alexey Razumovsky came from a family of Cossack Grigory MindChernigov. Childhood and youth passed on his farm Lemeshi. He wasusual for young rural affairs. But, having a wonderful voice and musichearing from time to time in the church choir sang a nearby village. Summer1731 the cities visited by Colonel F. Vishnevsky, who had a scorecourt choir boys for Empress Anna. Enchanted singing AlexisColonel takes a 22-year old Cossack to St. Petersburg. There was unexpected: thehandsome young man truly loved daughter of Peter and Elizabeth. Sure,official marriage between them could be the question. Alex took an activeinvolved in organizing the coup, which resulted to the throne was Elizabeth.Having gained power, the empress did not forget about O. Razumovsky. It has issued a decreeheneralporuchyka his work, was promoted to yehermeystera Imperial Court awardedOrder of St. Andrew. Also appointed manager of all itsestates. Soon he was awarded the title of Count of Rome, andlater - the Russian Empire.

During the Imperial O. Razumovskyyard was all brand Ukrainian: bandurists played at court, at feastsfiled Ukrainian dishes. More and more Ukrainian people were assigned to differentadministrative posts. Do not forget about his brother Alex Cyril. Took it to thethemselves, helped to get an education - first in St. Petersburg and later in Germany,Italy and France. At 17, Cyril Razumovsky a graph of the Russian Empire.In 1746 He returned izza border and was appointed PresidentSt. Petersburg Academy of Sciences. The same year he married Elizabeth's cousinCountess Catherine Naryshkin. Later K. Razumovsky destined to be the lastHetman of Ukraine.

Despite the significant impact the hetman and his brother atSt. Petersburg court, such actions have caused concern. In 1754 appeareda series of decrees that have limited the hetman. By K. Razumovsky waswere the counselor, restricted itself to appoint colonels. HenceforthHetman could only offer a candidate. Hetman was obliged toreport the income and expenditure Treasure abolish the borders between Ukraine andRussia, the customs duty on import of Russian goods, public customs, which gaveHetman's government 50 thousand rubles. profit each year. In response to a requestrestore independent foreign relations Hetmanate Razumovskyreceived a categorical refusal. 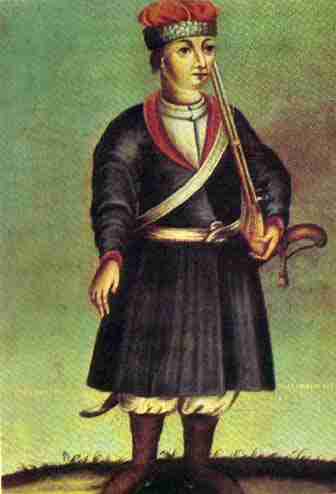 These restrictions do not stop the reformist impulseshetman. During the 1760-1763 biennium was carried judicial reform thatinitiated the separation of powers based on powers: the executive andjudicial. The highest judicial body became General Court, comprising, in additiontwo general judges were elected persons (one from the shelf). In histurn, the shelves (they numbered 10) were divided into two judicial districts in whichcreated a local (for civil proceedings) and the chamberlain (forconsidering boundary cases) the courts, in each regiment also created hrodskyy (forcriminal cases) the court, headed by Colonel stood. Judgeselected officers. Overturned by the judicial functions of the militaryoffice. Thus, the Hetman had transformed from civilian to militarystate. Along with changes in legal proceedings systematyzovuvalysya lawsHetman, which began as far back as D. Apostol.

3. Final disposition of the Hetman. Activity of P.Rumyantsev in Left Bank Ukraine. In 1761 diedEmpress Elizaveta Petrovna. On the throne, Peter III. After spendingEmperor few months, he ustyh irritate everyone with hispolicy. Against establishing a conspiracy, as a result of which it was removed frompower and killed. Was proclaimed Empress Catherine II, his wife. K. Razumovskytook active part in the rebellion, and it is not evident in the commitment of the newEmpress Hetmanate eliminate autonomy. The formal grounds forHetman cancellation were two cholobytni to the empress sent1763 Hetman K. Razumovsky and representatives of the Cossack. InThey discussed the restoration of ancient rights of Ukraine (independent judicial and financialsystem, land of lost 60's XVII. etc.) and officialrecognition of heredity Hetman posts by Razumovsky family descendants.

In St. Petersburg it was seen as a desire to separate fromRussia. Enraged, Catherine II was ready to give Hetman prosecuted. Finallyshe invited him to voluntarily resign mace. K. Razumovsky forcedwas to do it. As compensation he received the high rank and heneralfeldmarshalaa number of new estates. November 10, 1764 went royal decreeElimination of the Hetman's power in Ukraine. In later years he lived in K. RazumovskyRussian capital or abroad. Only in 1794 He returned toBaturin, where he died in 1803 (Buried in the Church of the Resurrection). 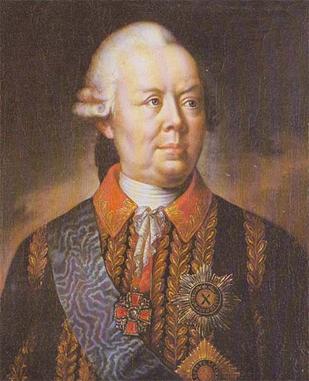 To control the lands of the former Hetman wasLittle Russian by the second board, headed by P. Room 'yantsev. Boardconsisted of four Russian officers and four general officers.The main task of the panel was to eliminate Ukrainian state institutionsand movements instead of Russian. During the 1765-1768 biennium Board brought thecontains all central institutions Hetmanate. In heraldic images zaprovadzhuvavsyadouble-headed eagle - the emblem of the Russian Empire. At the same time to protect people'sHuman P. Room 'yantsev introduced post attorneys at the Board and GeneralCourt. 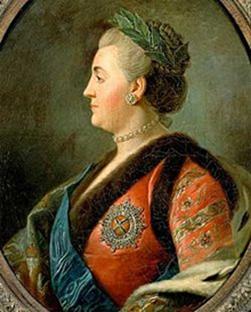 In secret instructions to the edge of Catherine IIstrongly encouraged to destroy all remnants of Ukrainian autonomy zakripachytyfarmers exercise close supervision of the development of economy in every possible way to increasetax.

The first step of a newheneralhubernatora was held in 1765-1767 biennium General AuditLand (General or Rumiantsev description). A review andsorted taxes. Replaced natural duty tax money, the amountwhich reached 250 thousand rubles a year (in 1780 it was already 2 million rubles).

Of course, the Ukrainian could not understand whatis the elimination of autonomy. Therefore, during the elections in 1767, the deputy toCommission to conclude a new compendium of the laws of the Russian Empire (the previous wasconcluded in 1649) and its working members of the Cossack officers, nobility,clergy, burghers demanded the Cossacks and renew the validity of Ukraine-RussiaTreaty of 1654, the hetman restore power more. Among those who advocatedlaw of Ukraine, deputy Grigory stood out Lubensky Poletyka. But the commission, notfailing to produce any real document in 1774, was dissolved andEmpress finally taken over the publication of the laws of the empire.

4. Cancel Cossack system in Slobozhanschyna.The liquidation of remnants of an autonomous system of Hetman. In August1765 Catherine II issued a decree on the abolition of the regimental system andSlobidskoUkrayinskoyi a province. Instead of five Cossack regiments wereformed five hussar. Local Cossacks were deprived of rights and privileges andturned into "military inhabitants. In 1780, instead SlobidskoUkrayinskoyiprovince formed Kharkiv viceroyalty.

In September 1781 abolished regimentalHetman and administrative and territorial division, which turns into Little Russianheneralhubernatorstvo of three provinces (province) - Kiev,Chernihiv and NovgorodSiversky. In provincial towns and district centerscreated the Russian administrative and judicial institutions.

Along with changes in administrative and royalGovernment concerned the problem of escape of Ukrainian peasants. In May, 1783 wasadopted a decree on the final attachment of peasants to their homes. Thismost were legalized serfdom of the Left and Slobozhanshchyna.

So at the beginning of 80's XVIII century. wascomplete liquidation of the Ukrainian state. Ukrainian flags, guns, stampswere removed to St. Petersburg. Its administrative and order, judiciary,social structure were largely unified with the other regions of the RussianEmpire. In the history of Ukraine begins a new period - the period of the newdeployment of the national idea of the struggle for the Ukrainian state.

— In Hetman K. Razumovsky (1750-1764 biennium)accounts for the period of the last Hetman of Russian Empire.

— In 1764 Empress Catherine II cancelshetman, and over the next 20 years, not to cause riots, iteliminated the autonomy Hetmanate Sloboda Ukraine and destroyed ZaporizhiaSich.

1. When hetman was restored in Ukraine? Who wasHetman last? 2. Name the reforms implemented by Hetman K. Razumovsky. 3.Who led the second panel of the Little Russian? What measures have been taken by it? 4.When the autonomous status was abolished Slobozhanshchina?

6. Describe the activities of reformist K.Razumovsky. 7. What was due to containment of reforming activityHetman last? 8. What turned the Ukrainian people for the elimination of the autonomyHetman Slobozhanshchina? 9. What is the historical significance of the Ukrainian CossackState Hetmanate -?

10. Find out the causes elimination Hetman. 11. Foldcomprehensive plan of response: "Elimination of Hetman and remnants of autonomyUkraine.

12. How do you think that Ukraine could choose independenceK. Razumovsky on board?