UKRAINIAN COSSACKS in the first quarter of XVII century.

real name Peter Konashevich-Sagaidachnogo - Konashevych. Sahaidachny - a nickname that comes from the word quiver - leather bag or carrying case for wooden arrows. Sahaidachny Peter Konashevich called for exceptionally skilful archery. Even at one of his portraits by contemporaries, he is portrayed with quivered behind.

on childhood and adolescence Peter Konashevich Sagaidachnogo-preserved extremely stingy information. Born between 1577-1578 he was with. Kulchytsi near Sambora in Lviv region in a family of small Ukrainian Orthodox nobleman. Got a primary education at home, and later studied at the Ostrog Academy and Lviv Brotherhood school. At the end of the XVI century. went to Kharkiv, where quickly gained credibility. He participated in numerous campaigns against the Cossacks, and soon became their lead. Become famous as an outstanding statesman. He Hetman Zaporozhian Host 1617 joined the European league to fight against the Porte. Aiming to create a powerful anti-Turkish alliance, which lead to the Cossack hetman laid republic, he established diplomatic ties with Moscow, Georgia and Iran. A brilliant military leader, a wise politician, a gifted diplomat Peter Konashevych-Sahaidachny won well-deserved tribute contemporaries.

2. He had great diplomatic abilities.

3. Participated in the then European politics.

Supporting Due to hike

5-7 June 1621 in the natural oakwood in Cherkasy dry the joint council and unregistrated Registered Cossacks, which dealt with proposals on the participation of Polish Sejm Cossacks in the war against Turkey. Cossack Council decided to act together with Poles provided the Polish government a number of demands, including:

little Cossack mission to inform the king that led Sahaidachny.

During Soon Under the leadership

P ` yatytyzhnevi fights, in which the decisive role played by the Cossack infantry, ran for the Turkish-Tatar forces defeat. September 29, 1621 between the Commonwealth and Turkey, signed the peace treaty.

Hetman Konashevych-Sahaidachny. Ukrainian Cossacks in the first quarter of the XVII century.

Fragment of a map depicting the Dnieper Boplana 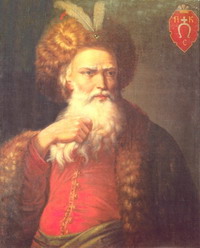 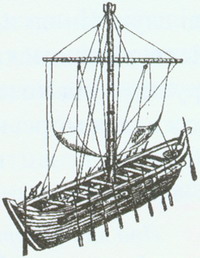 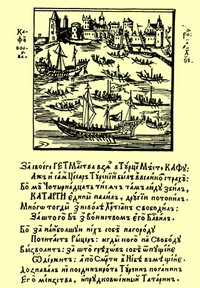 Getting Kafi Cossacks. Engraving from the book "Poems on the noble knight rueful bury Peter-Konashevich Sahaidachnyi 1622

Fragment Khotyn fortress, near which the events unfolded Khotyn war 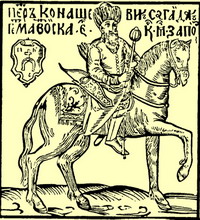