Getman Pilip Orlik CONSTITUTION OF UKRAINE AND ITS

Philip Orlik (1672-1742) came from an old Czech family. During the Hussite Wars ancestors left Orlik Czech Republic and found themselves in Poland. The future hetman was born October 11 1672 near free. When one year old boy, killed his father. Therefore, a charge of raising a son - the Ukrainian Orthodox shlyahtyanka. Mother cares Philip got a good education, learning at first in the Jesuit College in Vilnius, and later when the family moved to Ukraine - Kyiv-Mohyla Academy. With its unusual ability, he has proved himself one of the best students. Orlik was very fond of rhetoric and was a good speaker, wrote poems that were published in the late XVII century. Deeply interested in philosophy and literature, fluent in Ukrainian, Polish, Slavonic, Bulgarian, Serbian, Latin, Italian, German, Swedish, Old- New Greek and probably Turkish. Naturally, and embraced the position in 1699 Hetman OFFICEyariyi, he quickly overcame official steps and soon (in 1706) became general secretary. Orlik was utayemnychenyy in all cases Mazepa, supported him during the rebellion antymoskovskoho went with him into exile, by the end staying true to the idea of Ukraine's liberation.

This is seen in

document consisted of the introduction and 16 articles.

main provisions of the articles:

Ukraine proclaimed an independent republic, the Constitution Orlyk became the highest ranks of contemporary political thought, not only in Ukraine but also in Europe in general, because no country at that time had no such documents.

Constitution has limited the rights of the hetman, was intended to create a representative body - the General Council. It was laid the foundation of the principle of separation of powers on the executive and judicial branches, implemented by elected positions. Such forward-looking features of the anticipated future directions of development of democratic states.

Orlik managed to create antymoskovsku coalition of Sweden, the Crimean Khanate, Turkey, the government Orlik, as well as those of Polish forces, who supported the Stanislaus Leszczy

Almost For the Horde

Prutsko peace treaty in 1711 and its implications for Ukraine

Under the agreement By It made Ratification Authorities are

So hope Orlyk the rapid liberation of Ukraine failed. He himself remained in exile Hetman, nor patronage because the Swedish king, nor the alliance in Crimea, no recognition of the owner of Right-Bank Ukraine from Turkey, no support Sich troops vtoruvaly his way to the Ukraine.

Philip Orlik Hetman of Ukraine and its 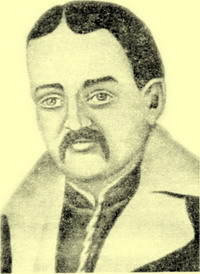 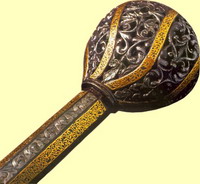 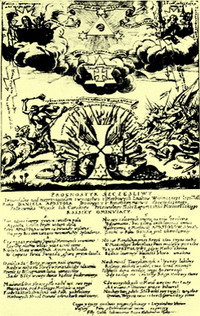 Illustration to a poem in honor of Philip Orlik Myrhorod Colonel Daniel Apostol. Engraving by I. secular. 1693