Because the Union of Lublin 1569 within the sameStates were most Ukrainian lands. On the one hand, helped themcultural convergence, on the other - led processes polonization and stick a catholic faithUkrainian. Important role in the cultural development of this period belonged to the church.The Union of Brest 1596 led to a deepening crisisOrthodox Church and its loss of its privileged position in society,that negatively affected the development of Ukrainian culture. In the culturewas also the struggle of different classes of Ukrainian society for theirnational and religious rights.

In the XVI century. Ukrainian culture were affectedkulturnoideolohichnyh currents that prevailed at that time in Europe. From west to eastUkrainian lands spread trends related to the Renaissance, the Reformationand Counter. Ukrainian cultural figures, taking the new European ideasThis day, they searched for solutions to contemporary problems of their country.

2.   DevelopmentUkrainian language. In the XVI century. returned by letter language Ukrainian and Belarusian called"Rus". In the Grand Duchy of Lithuania was the official languageStatutes of Lithuania were written, was conducted proceedings in courts and stateinstitutions.

In many contemporary texts documents Researchersdetermine the effect of oral folk language. It is believed that in the XVI century. in Ruslanguage under the influence of oral folk speech features appear Ukrainianliterary language.

One of the first books translated fromChurch Slavonic in the then Ukrainian was PeresopnitskeGospel written in a monastery in the village. Peresopnytsya in Volhynia. Manyresearchers impressive sights of this unique talent and his courageTranslators - Monastery Archimandrite Peresopnytsia Gregory and soncleric of the city of Sanok Mikhail Vasilevich. They not only replacedChurch Slavonic language words or non-Slavonic origin of clearthe then Ukrainian speaking, but also cited their interpretation undergirding and synonyms.

Later there are othertranslations of religious texts in Ukrainian - Krehivskyy Apostle (60-iesXVI cent.) Volyn Gospel (1572) and others.

3.   Education andschooling. In the XVI century. on Ukrainian lands, as in previoustimes of churches and monasteries were primary schools. Clerics, who taughtthere to teach children reading and writing Church Slavonic language, arithmetic andsinging.

Children of wealthy society of states could receivehome education. With vchytelivbakalavriv than reading, writing andarithmetic, they studied Latin and Greek language, basics of philosophy.

In the 70's XVI century. in Ukrainian landsan emerging secondary school. In Europe at that time there weresecondary schools, where teaching Latin and "seven free Sciences"- Grammar, rhetoric, dialectic, arithmetic,geometry, astronomy and music. In Ukraine the schools of this typewere Slavic hrekolatynski school.

The first such school was opened by Prince K.-V. Ostrog in hisCastle about 1578 She kept the money the prince. Ostrog alsoopened a print shop in his castle, he organized and launched a scientific grouplearning in their school basics philosophy. This meant that Ostrogschool constant, but secondary, to give the beginnings of higher education. Along withThis supported the prince invited his Ukrainian and Greek philologists and theologiansprepared Bible Church Slavonic for further printing. CreatedPrince K.-V. Ostrog educational, research and publishing center of contemporarySincerely called Academy.

With "a school" - the Charter of Lvivsister school in 1587

The rich on the poor in higher school does notbe the only science itself ... Teaching children to love and dydasl (teacher) shouldall the same - as the children of rich and poor orphans, and those on the streetsasked to food, as someone who has more or less ability - but teaching is notprovide benefits to one against the other.

The teacher must observe each time: whento whom the child may be, shall send for him and learn whydid not come ... In the morning, after prayers, everyone must comply, heyesterday learned, and show your writing, which is prepared at home.

After lunch the boys themselves should write totables of tasks that gave them a teacher, but small, for which he must writeteacher. But after learning the school should ask each other difficult words, iedysputuvaty. A walking home, the poem again to come home from schoolchildren were to their family ... According to the custom of the school of science, read with the explanationthat studied in school, and learned that the day should be at home in the evening and writemorning to bring to school, to show his teacher ...

If the teacher himself or someone of the discipleswould follow those rules ... - Then this is not only a teacher but a simple citizenThere can not be ...

1. How, under the Charter, the process took placeTraining? 2. Can I say that contributed to strengthening the principles of the Charterfairness and accountability in school life? Why? 3. Which of the followingin the Charter of the rules you think possible for use in the modern school?

Along with fraternal (Orthodox) schools inUkrainian lands have Jesuit (Catholic), Protestant, and afterUnion of Brest and hrekokatolytski school. All they provided secondary education andsimultaneously helped spread the influence of their churches in Ukraine.

4.   Chronicle. Development of Book Publishing. In the XVI century. in Ukrainianlands continued tradition of chronicles. In Quick StartKiev Chronicle describes events that took place in the years 862-1515Probably it was formed in late XV - early XVI century. Becausedescription of the events of this period marked the greatest dokladnistyu and precision dating.

In the XVI century. successfully developed publishing. Considerablecontribution to the development of Moscow did pioneer Ivan Fyodorov(F.). Moved to the city, he gave money in Lviv brotherhood 1574 his first book in Ukraine - "The Apostle"and "Primer". Designed to teach Church Slavonicliteracy "primer" was the first school textbook on Ukrainian land. 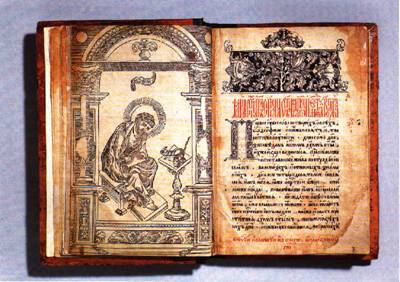 In addition to Ostrog, to large printing presses owned printing houseLviv Brotherhood, which started its work in 1586 It was established onbased printing Fedorova, bought brotherhood after the death of the printer.

- Big impact on conditions for the development of Ukrainian culture inXVI century. had political reasons.

- In the XVI century. on the basis of written language Ruthenian languageUkrainian and Belarusian people under the influence of spoken Ukrainian formedliterary language.

- In the second half of XVI century. in Ukrainian landsformed a new type of educational institutions - Slavic hrekolatynska School,meet the educational needs of the then and helped raise the level of education inUkraine.

- The development of publishing in the Ukrainian lands contributedspread of education, helped counteract Ukrainian Orthodox polonization and stick a catholic faith.

1. As European influence on the flow kulturnoideolohichnidevelopment of Ukrainian culture in the XVI century. 2. As referred to in the XVI century.returned by letter Ukrainian and Belarusian language? 3. When the Brotherhood was created the first schoolin Ukrainian lands? 4. What items were the "seven free science? 5. Whichschool at that time in Ukraine put the beginnings of higher education? 6. What recordsdescribe the events of XVI century. in Ukraine? 7. What was the name of the first schoolprinted textbook on Ukrainian lands? 8. When was printed OstrogBible?

15. Start of Table "The development of Ukrainianculture in the XVI century. ".