12 (24) June 1812 Napoleon attacked Russia. His army consisted of 640 thousand people. and 1372 gun, directing his main attack on Moscow. She resisted the Russian army of 597 thousand people. But it was divided into three parts: first, headed by General Barclay de Tolly, defended the way to St. Petersburg, II-A, headed by General Bagration, defended the way to Moscow, I-III, headed by General Tormasov defended way to Kyiv. Russian commanders had chosen a strategic plan which involved the gradual depletion of enemy small struggles and stretching his communications, not entering into a decisive battle.

In its plan significant place Napoleon gave Ukraine, which he planned to turn in the center of anti-Russian movement. Right Bank, he promised to return to the Polish king, Galicia and Volyn - pass the Austrian emperor, the Crimea and Northern Black Sea - Turkish Sultan. The rest of the territory was divided into military and colonial administrative region (Napoleonide) and a source of supply French army with food, feed, horses, oxen and even soldiers.

to prevent anti-Russian uprising in Ukraine, Alexander I issued a manifesto urging the Ukrainian population to defend their land. Cossacks' regiments and opolchenskyh came almost 70 thousand people. Until troops entered the free peasant population, peasants, serfs. In the formation of a Cossack regiment participated in the Ukrainian poet and writer Ivan Kotlyarevsky. In the regular Russian army made up a significant percentage of Ukrainian. Thus, among the ranks of it amounted to 50% among junior officers - 80%, senior officers - 20%. Among the Ukrainian population there were two views on this war. First - look autonomists who hoped to gain by Napoleon's autonomy. Second - "Little-conservatives," which bowed to Alexander and I hope after the victory over Napoleon's army again raise the question of autonomy. Therefore, the Ukrainian people to the military donated large sums of money, many prodovolsttion, feed, bulls, horses, means of transportation, took an active part in the construction of defensive fortifications. On the Ukrainian militia spent 9 million rubles., 13.5 pounds of silver and several kilograms of gold.

also well prepared to repel enemy attack Kyiv. The city erected new fortifications, did much to further restructuring and strengthening of Pechersk fortress.

designated capture Kyiv housing Schwarzenberg Napoleon's troops had not managed to break even in Ukraine. The fighting has involved only a part of Volyn.

selfless patriotism shown even Single soldiers who for various reasons found themselves behind enemy lines. Since local people are organized guerrilla units who did not give peace the conquerors (F. Potapov, E. Chetvertak).

Eight Ukrainian Cossack regiments participated in the so-called "battle of the nations" in autumn 1813 in Leipzig. It was another shattering defeat Napoleon's army inflicted on coalition troops in Russia, Britain, Austria, Prussia, Saxony, Switzerland, Spain and Portugal. Winners opens direct route to Paris. In March 1814 six Ukrainian Cossack regiments within the Russian army entered the capital of France. So the war was over. However, Ukrainian hope that their situation will improve after the war, were in vain.

By decree of the emperor all the Cossack regiments and the militia was disbanded. Most militias returned to serf status and for their service each received two awards rubles.

Since the emperor renounced his promises, the Cossacks of Little Russia equestrian Cossack regiments, who wanted to carry military service, was forced to leave the Kuban Cossacks to the Black Sea. Others returned to their homes, since most of them were very wealthy and belonged to the state peasants.

formed mainly on the Right Bank of the serfs, the Ukrainian Cossack horse division with shelves Bug Cossack troops became the object of cruel social experiment, conducted tsarism. In order to reduce the cost of the army of the emperor, on a proposal of his friend O. Arakcheyeva, issued a decree on the organization of military settlements, where military service is combined with agricultural labor. In Ukraine, the military settlement was organized in Sloboda-Ukrainian Katerinoslav, Kiev and Kherson provinces. Heavy palochni living conditions in this settlement eventually led to a wave of revolts.

This may be said to Alexander I formally kept his promise and did not return to serfdom Cossacks, but settlers military situation was even worse than the peasant-serfs.

settlers from morning to night regulated military ordinance. Numerous prescription and instructions defined privacy in the family, teach the children, the order of the house and others. Frequent unannounced inspections at any time, houses, military parades were not given the possibility to farm and made their lives worse than in prison. That was thanks to Alexander and valiant Ukrainian Cossacks - rescuers his empire.

Relations between the Russian and Ottoman empires again exacerbated in the 20's of the nineteenth century., as the first insisted on its right to defend all the Orthodox subjects of Sultan. Russia's support to Greek liberation uprising against the Turks led to the beginning of another war. Like previous wars, the Russo-Turkish War 1828-1829 he was based heavily on Ukrainian land. Again the villagers had to supply necessary for the Russian army food and feed to oxen and carts to transport goods.

The Russian army has been weakened by experiments O. Arakcheyeva the establishment of military settlements and did not have the necessary forces for a sustained war. In this difficult situation the Emperor Nicholas I, like his predecessor, made mention of Cossacks. In 1828, it was established Danube Cossack Host Southern Bessarabia, where over two decades of settled Danubian Cossacks, who were returning from Turkey to Ukraine. Danube army was one of the most combat-ready units of the Russian army.

turn-aid received during the war the Russian army and Cossacks from zadunaytsiv who led by chieftain Joseph moved smoothly to the side of Russia. In response Turkey has destroyed the Danubian Sich.

result of successful action war was quickly over. Turkey was defeated and was forced by Adrianopolsky contract in 1829 to give Russia the eastern mouth of the Danube and Black Sea coast. Ukrainian again, once again, helped the Empire to realize its geopolitical interests.

War of the early nineteenth century. decide the final fate of Cossack formations that came about after the dissolution of the former Cossacks Zaporizhzhya Sich.

Ukrainian lands in the international relations of the first half of XIX century. (1812 - 1830's) 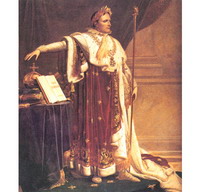 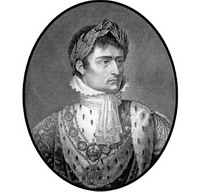 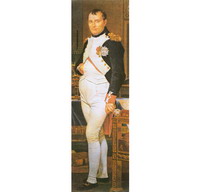 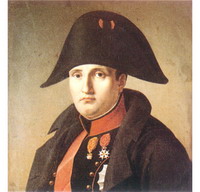 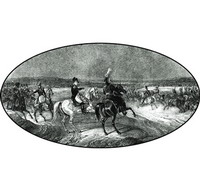 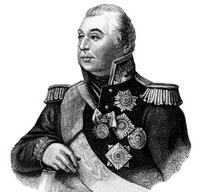 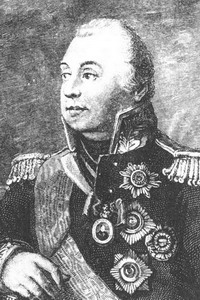 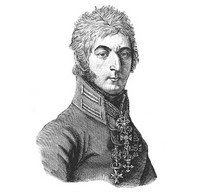 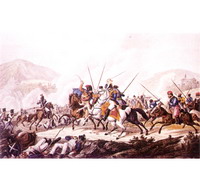 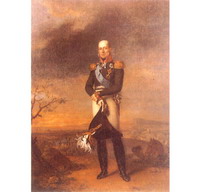 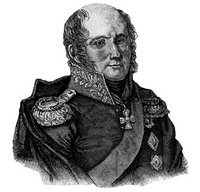 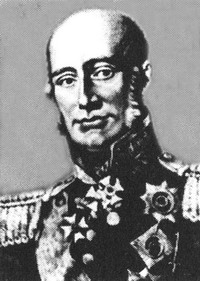 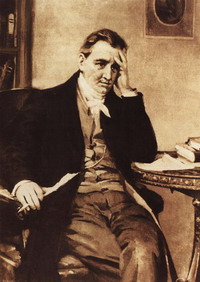 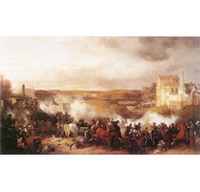 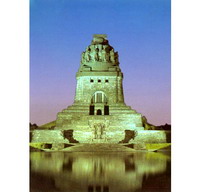 Monument to the Battle of people near Leipzig 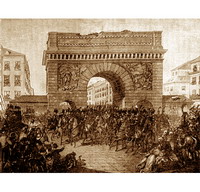 Entrance to the winners in Paris 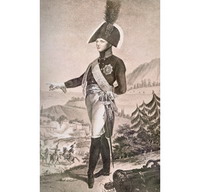 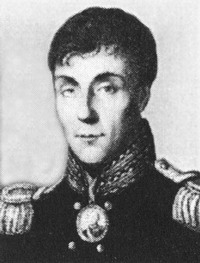 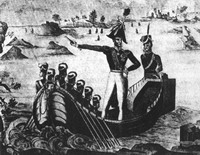