Being "gendarme of Europe" after the revolution suppressed 1848-1849 Russian tsarism believed that strengthened its position in Europe and can proceed to solve important to the "Eastern question". Russia wanted control of the Balkans and the Black Sea straits.

reason for the deployment of military action against the Ottoman Empire, the conflict around the holy places in Palestine associated with the life of Jesus Christ. In June 1853 Russian troops unexpectedly crossed the border with Turkey and occupied the Danube principalities. Having ascertained the support of Britain and France, who did not want to strengthen the position of the Russian tsar, the Turkish sultan declared war on Russia. First course consisted of hostilities beneficial for Russia.

Russian troops suppressed the attack Turkish troops in the Caucasus, but most began to move to Bulgaria, have besieged the important fortress on the Danube Silistra. Turkish Black Sea fleet was completely defeated the Russian fleet in Synops'ka Bay. The victory was part of Russia do not plan to major powers.

Austria and Prussia demanded the king to withdraw from the Danube principalities. Once in international isolation, Nicholas was forced to surrender. However, in March 1854 Britain, France and Sardinia declared war on Russia. With the advantage of the sea, Anglo-French troops first resorted to attacks from the sea in Odessa, Mykolayiv, Sevastopol and other cities. In April 1854 Allied squadron has moved to Odessa and began shelling the city. During the second attack one of the British frigate ran aground and his team had to surrender. Third attack in July also failed.

active part in defending the coast from the Danube to the Danube Cossacks took Odessa (Ust-Danube) troops.

In early September 1854 Anglo-French troops landed on the Crimean p-e near Evpatoria. After losing the battle at the Alta royal army led by Prince Oleg Menshikov retreated northward, leaving their fate the main naval base of Russia on the Black Sea - Sevastopol.

War witnessed a huge military-technical superiority allies, armed with the latest technology. For lack of command of Russian railways (as opposed to the enemy, using ships) could not supply the army in time all necessary.

began the siege of Sevastopol. She carried 60000th army allies. The garrison consisted of base 18 thousand people, in addition to defense has attracted 20 thousand sailors. Defense of the city led the Admirals P. Nakhimov, V. Kornilov, V. Istomin. With such power relations attackers unlikely to get home base, if they had no advantage in weapons and ammunition. Obsolete Russian guns were in comparison with artillery allies - quick-firing, extensive and accurate. In other words, for every 10 guns enemy defenders of Sevastopol could answer only one. After repeated assaults Anglo-French forces managed to seize Malakhov mound, the main reference point in the defense of the city.

At 349-day fighting Russian troops were forced to leave their positions in southern city, but continued to hold the northern sector of defense. In defense of the city took an active part Plastun (intelligence) Black Sea Cossack troops who carried out attacks on enemy positions. Fearlessness, ingenuity and ability to apply a brilliant stratagem distinguished themselves in defense of Sevastopol Cat sailor P. Nurse and D. Sevastopol. Exemplary medical service organized in N. Pirogov, who developed the practice of teaching the basic principles of military field surgery. In Sevastopol Heroic epic royal government, with untold human and material resources and failed to send fresh troops to the Crimea. This weakness was explained by the military-technical and economic backwardness serfdom rule but also the constant threat of invasion by western borders of Russia. Deploy war in the Balkans and later in Krymu turned the Ukraine in the nearest rear troops. The territory of Ukraine became a source of replenishment of food and new recruits. Under the influence of war in Ukraine turned antykriposnytskyy mass movement in 1855 - Kiev Cossacks, and in 1856 - according to the will to Tavria ".

reason for this was the king's manifesto on January 25, 1855 on a movable militia. Farmers welcomed the manifest content as the release from serfdom. They recorded the mass of Cossacks "by refusing to perform duties. In February 1855 in Kiev province villagers performances spread into 9 districts. The government dropped 16 squads cavalry, infantry battalion, two companies of sappers. There were bloody clashes between troops and risen, 39 peasants were killed, and 63 - were wounded. This movement is called "Kiev Cossacks".

In April 1856 comes second speech of the peasants - the so-called campaign "by the will of Tavria". After the Crimean War, went among the peasants rumors that you can move to the Crimean peninsula, the government will provide substantial assistance and release from bondage. In the summer of 1856 near Perekopa gathered tens of thousands of peasants. But government forces failed to stop the movement.

But peasant unrest continued. The Crimean War showed the economic, political and military-technical backwardness of Russia. The war has exacerbated the crisis even more feudal serfdom system.

In March 1856 the Paris peace treaty was signed on terms dictated by the winners. Russia have a right to get rid of the navy and the fortress on the Black Sea. Danube again passed under Turkish rule.

During the war, in February 1855, Nicholas II died heir to the throne by his son, Alexander II, who had become a great reformer, as Russia badly needed reforms. 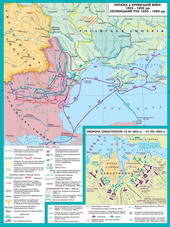 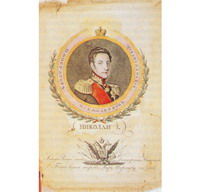 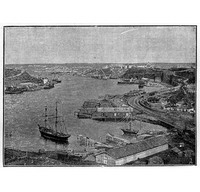 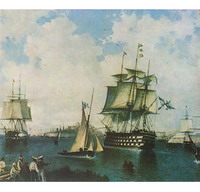 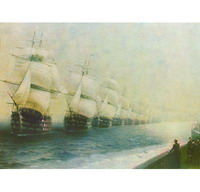 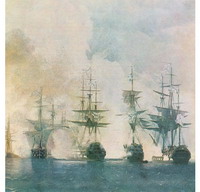 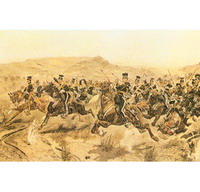 Battle of Almi. The Crimean War 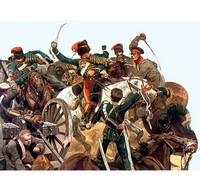 Battle of Balaklava. The Crimean War 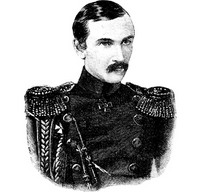 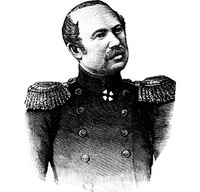 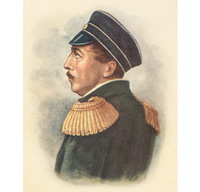 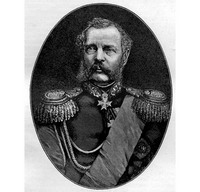