process of consolidation of capitalist relations in Ukraine, accompanied by a shortage of arable land and complete obezzemelennyam peasantry. Farmers, having lost the main source of existence, sought to return to their traditional lifestyle. So, first and main goal of Ukrainian peasants are searching for free land.

continued even started in late XVIII - early XIX century. Ukrainian migration movement in the Volga and the North Caucasus. In the second half of XIX century. of the Ukrainian population has reached almost 400 thousand people. in the Lower Volga region and 1.3 million in the Caucasus. Over 100 thousand Ukrainian appeared in Kazakhstan and Central Asia. Ukrainian settlers bring their economic experience to the field of new settlements, introduced in farming practices here have not known culture buckwheat, corn, sugar beets, tomatoes, strawberries, etc..

Ukrainian and she came in while the sparsely populated regions of Siberia. At the end of XIX century. them there were about 225 thousand people. Ukrainian made a significant contribution to the development of Far Eastern expanse of land and other okrayinnyh Russian Empire: the unusual climatic conditions, hard work osushuvaly swamp forests vykorchovuvaly, settled the virgin lands.

from Galicia and the Transcarpathian Ukrainian mostly emigrated to the U.S., Canada and Brazil. Interested in cheap labor force for agricultural development and industrial governments of these countries in the 70-90's of XIX century. encourage mass migration from abroad. Most emigrants from Ukraine napravlyalas back to work. In 1877 the first emigrant group of Ukrainian immigrants arrived from forests to the U.S., added to the ranks of miners of Pennsylvania. But most Ukrainian peasants tried to get soil for agricultural land - homsted (inheritance, which was provided from public land funds on concessional terms in the U.S. and Canada, those who would keep the farm).

Many of them were among the miners, which got the hardest jobs. Receive meager salaries unskilled laborers Ukrainian. Despite the physical hardships, Ukrainian immigration USA, which the late XIX century. consisted of more than 200 thousand people. retain the Ukrainian national customs and traditions, realizing a single national community.

end of the XIX century. slightly less than the number was Ukrainian immigrant communities in Canada. The vast majority were Galician and Bukovina Ukrainian. They settled in deserted places in Western Canada, where he received homstedy. Having your own farm neighbors in homstedah built their dwellings, formed a settlement with a church, school, post office. Thus the Ukrainian village. As Ukrainian-pershoposelentsi in the U.S., their countrymen in Canada, one of the first of its settlements also called Ukraine.

Resettlement and Ukrainian emigration in the second half of the nineteenth century. - In the early twentieth century. 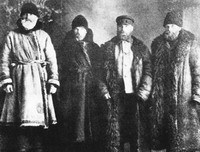 One of the first Ukrainian immigrants to America - Baptists Sypchenko I., G. Cousins, I. and J. Little Uncle.

Priest A. Goncharenko readers of editing it in the U.S. newspaper "Svoboda". 1901 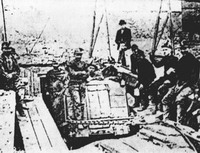 A group of Ukrainian collier in Canada. 1904

Emigration from Ukraine work in the field. Canada. 1904