§ 42. Politics "appeasement" the aggressor and its collapse (textbook)

§ 42. Politics "appeasement" the aggressor and its collapse

In those conditionspreservation of peace meant Versailles-Washington system, which, despiteits shortcomings, ensuring relative stability and recognized the force of law. Thisit contains the principle of prevention of international crises. He anticipatedcollective action against the aggressor through the League of Nations. Collective could not repel?mechanism failed. Why?

First of allbecause the ability of Western countries for collective action against aggressors droppedthrough the aggravation of mutual rivalry in search of ways to overcome economiccrisis. In addition, the economic situation and distract public attentionpoliticians on internal problems. Solving them was a priority.

Collectiveresistance needed to use a variety of aggressors, including powermethods. Protecting peace in those conditions required courage, will and readiness to certainlosses. However, the very idea is for people who have just survived the war, seemedsinister. The public in England and France was set strongly againstuse of force. China, Ethiopia seemed too distant to perceive theirthreat to European security. Understanding the integrity and indivisibility of the world does notwas inherent to the then public opinion. Such sentiments have found theirreflected in policy "appeasement" that led the country topassivity and excessive caution.

The advent of Hitlerto power was not immediately accepted by turning in politics Germany. Longtime it saw only a strong national leader who sought to restorefor German justice. Plans of the Nazis first division of the worldevaluated as a tribute to nationalist rhetoric and not taken seriously.The leaders of Britain and France saw no reason to change policy, whichactively introduced in the 20's and was aimed at the gradual weakeningburden of Versailles. It becomes clear lack of response and EnglandFrance of Germany, though they wore open and audacious characterviolated a principle of international law: the contract mustfollowed.

Nazism inGermany has not had time to show his predatory face. European countries were nothorrors of occupation. Hitler seemed to be a politician with whom you agree.

Noteworthy to say about the U.S. position. The crisis there chainedpublic attention to domestic issues. Increase voltage generated in the worldU.S. desire to stay away from everything in his "Americanfortress. After the adoption in 1935, the law of neutrality richestcountry in the world, with significant resources and ability to influence world politics,like it fell out. This dramatically increased the chances of the aggressors.

Moststrong supporter of the policy of appeasement was the Prime MinisterUK in the 1937-1940 biennium N.Chem-berlen. In his view, the dangerwas not in the aggressive intentions of Germany, and in the wrong estimation of the international crisis.He believed that the First World War arose because of certain great powerstime lost control of events resulting in local conflict escalatedin World War II. To avert this danger, to savecontacts with all parties to an international conflict and solve existingproblem based on mutual concessions.

In fact, Hitlerfocus on new and nahabnishi claim. They became the objects of discussion and allhappy ending territorial claims in Germany.

2. "Anshlyus" Austria and the Munich Agreement 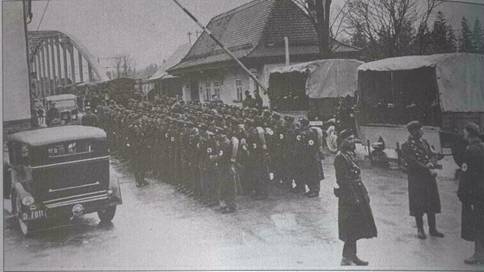 Introduction to the German army in Austria

AccessionAustria was one of the important policy objectives in Germany. In February1938 Austrian Chancellor Shushnih signed an agreement with Germany, which placedAustria in control of Germany. March 12, 1938 German troops insupport of the Austrian Nazis occupied Austria. The next day, AustrianZays Inkvart fascist-proclaimed reunification of Austria with the German Empire. Nogreat powers, nor the League of Nations did not reacted to it. Only the Soviet Union expressedprotest against such actions. 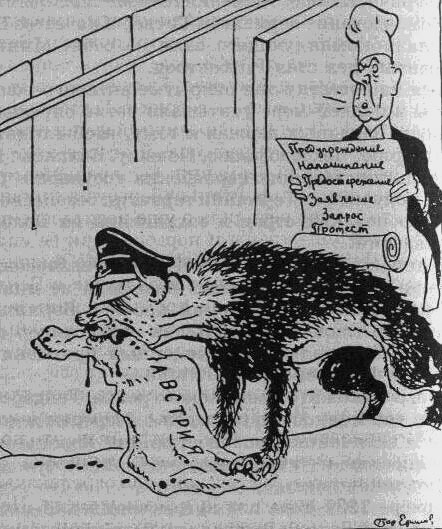 But thencorrelation of forces was not in favor of Germany. Czechoslovakia had a goodarmed and trained army of 45 divisions, which relied on the borderfortifications. Germany had 47 divisional insufficiently armed. BesidesCzechoslovakia Soviet government offered under the contract in 1935full assistance.

Aninternational crisis. For its solution Chamberlain met Hitler twice.They agreed that the conflict will be resolved in Munich.

During the meeting, Munich, Hitler declared that the Sudeten region - Lastterritorial claim in Europe, Germany. This, and the Anglo-Frenchultimatum to the Czechoslovak Government for the immediate transfer of German territory CHSR,populated by Germans, clearing the way to the Munich Agreement. It was concluded at the backCzechoslovakia's prime ministers of Britain, France, Germany and ItalySeptember 29-30, 1938

Statement by prime ministerN. Chamberlain on his return from Munich in which he stated that broughtpeace for a generation

The resultrejection of the agreement was CHSR to Germany all the borderwestern and northwestern areas. CHSR lost 20% of the population and almost 50%heavy industry, With all border fortifications. The border with Germany was held40 km from Prague. 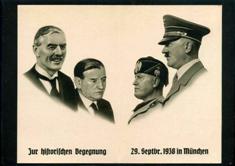 Munichagreement - one of the most shameful pages of Western diplomacy. England andFrance betrayed Czechoslovakia, a country of which it was associated withVersailles system, one of the few real democracies in Europe. Cynicalwas a link to the right of nations to self-determination, the right of Germans, Hungarians,Poles to unite with their motherland, because in 1919 Paris isright were sacrificed and strategic antynimetskym antyuhorskyminterests, as in 1938 offering policy "appeasement."Messenger Czechoslovakia in England after signing the agreement said the SovietAmbassador: "They sold me into slavery Germans, once Negroes ever sold inUSA! "

Munichagreement meant the transformation of Germany's most powerful state in Central Europe.All the small countries of the region understand that neither league Нtions, nor England with Francecan not guarantee their sovereignty and went to the rapprochement with Germany. Inthis sense the Munich agreement was a strategic defeat England and France andcontributed to the outbreak of war.

ButWhile the West plot were received with relief. Chamberlainsaid, returning to London he brought peace to this generation.

Such thoughts have dominated long. For winter 1938/1939 he leaders of Britain and Franceunderstand the fallacy of their reasoning. Despite the obvious fallacy of his policy, 27February 1939 the governments of England and France recognized the regime of Frank in Spain, whichactively supported by Germany and Italy.

Timtime Germany did not leave time for reflection. March 15, 1939 Germantroops occupied Bohemia and Moravia, Slovakia was declared an independent andHungary took over the entire Carpathian Ukraine. 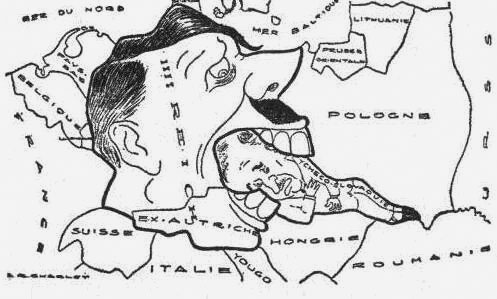 More Germanybegan to seek consent from Poland to Danzig and transfer it to build throughPolish Corridor exterritorial road that could link Germany with Prussia.German troops entered the region Memelsku (Klaipeda), which belonged to Lithuania.In April 1939 Italy carried out aggression against Albania and captured it. 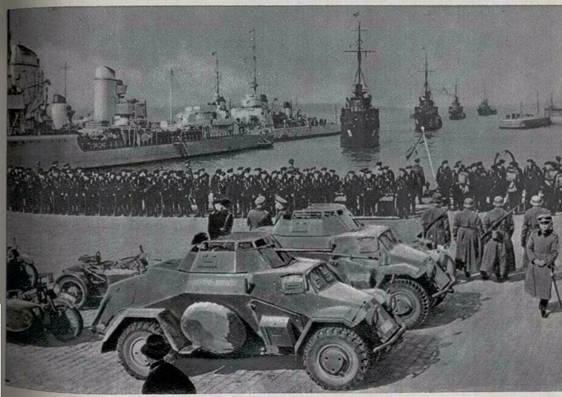 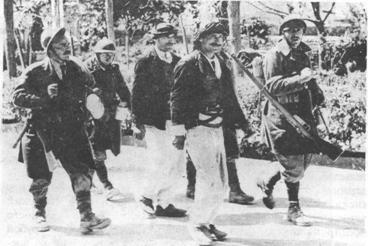 RetreatAlbanian soldiers under the blows of the Italian army

Crash Policy"Appeasement" became apparent. In the public consciousness fracture occurred.From the government demanded rigidity in attitude and determination to Germany. England andFrance exchanged notes on mutual assistance against aggression and providedappropriate safeguards States that have a common border with Germany. Begunpreparation for war.

Occurrenceimminent threat of war demanded by governments of England and France closer toUSSR, which is so thoroughly Western leaders have tried in years removed from poperedhiEuropean policy.

Rozchlynuvannya Czechoslovakia under the pressure of England and Franceequivalent to the full surrender of Western democracies to Nazi threatuse of force. Such failure will not bring peace or security of either England orFrance. Instead, he put the two countries in the situation will becomeweaker and more dangerous. One only mean neutralization of CzechoslovakiaGerman diviziy age 25, which will threaten the Western Front. ExceptShe opens the triumphant Nazi way to the Black Sea. It is aboutthreat not only to Czechoslovakia but also freedom and democracy in all countries. Thoughtif you can provide security, throwing a little country over to a wolf - rockerror. German war potential will increase for a short timemuch zhvydshe than England and France could end the measures necessary for theirDefense

1. WhyWinston Churchill opposed the Munich Agreement? What arguments he makes?

1.       Why was not createdsystem of collective repel the aggressors?

5.       Compare the level ofconsolidation of forces of aggression and power of the collective security system.

6.       What is the position of the USSRMunich Agreement?

7.      Make a list of actions governments of England and France, which canattributed to the manifestation of peace.

September 29-30, 1938- MunichConference of Heads of Governments  EnglandFrance, Germany and Italy.