§ 43. USSR in international relations on the eve ofWorld War

Duringworld economic crisis of the USSR sought to use the contradictions betweencapitalist countries to ensure the first five-year transformation.It soon became clear that the actions of Germany and Japan threaten the security of the USSR. Itchanged its foreign policy doctrine. The threat from Japan, forced the Soviet Uniongo closer to Chiang Kai-shek and to recommend CCP to act together in Homindanomagainst Japan.

Soviet Union madeby a system of collective security and deterrence aggressors. ConductorThis course became the People's Commissar for Foreign Affairs of the USSR M. Litvinov. USSRmanaged to consolidate their position. In 1933 established diplomaticrelations with the U.S., and in 1934 The USSR was adopted in the League of Nations as a member of the Boardwhich meant the recognition of his great power.

Success inby creating a system of collective security was the conclusion in 1935Soviet-French agreement on mutual assistance. However, it wasno war article, but in any case the agreement opened the way tojoint struggle against the aggressor. A similar agreement in 1935 was concludedwith Czechoslovakia. 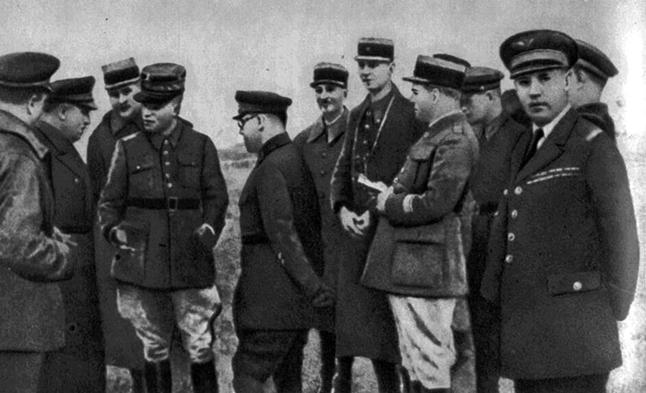 AttitudeWestern countries to create a system of collective security was cool.Soviet-French agreement was ratified by France only a year.Doubts raised above all that the Soviet Union has no common border with Germanyand to fulfill their obligations? Soviet troops would crossto Poland and Romania. But these countries feared the Soviet Union more? than Germany? andcategorically refused to miss the Soviets. In the French consistedimpression that the USSR would drag France into conflict with Germany, and the verystay away. When the West became known effects of repression in the SovietArmy, the military alliance with the USSR roztsinyuvavsya as meaningless.

2.Changing foreign policy of the USSR. Soviet-German non-aggression pact andsecret protocol to it.

The defeat of the USSRon the European diplomatic front was held against the backdrop of deteriorating relations withJapan, which resulted in a conflict near Lake Hassan in July 1938 AccordingSoviet leadership? Soviet Union was the prospect of aggression from the East andWest. 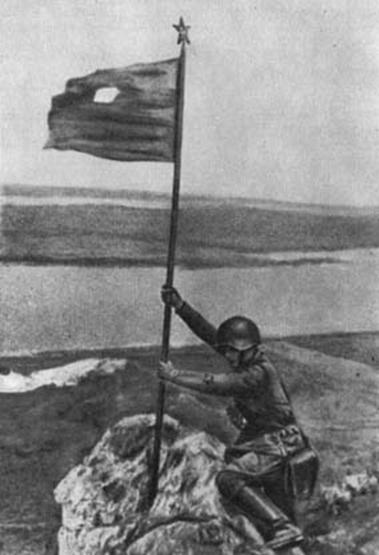 Losthope for the possibility of establishing a collective security system, being inpolitical isolation, mistrust proynyavshys to England and France, the SovietUser starts searching for ways rapprochement with Germany. An important feature ofchanges in Soviet foreign policy orientation was replaced Litvinov asCommissar for Foreign Affairs. Became the new Commissar Molotov (May 1939), andit meant that Stalin himself is set to guide foreign policy.

England andFrance, concerned about their unexpected developments, made statements aboutguarantees a series of European countries - Poland, Romania, Belgium,Holland, Switzerland and others. Guarantees new situation in Europe. Germanycould not take the aggression against the USSR, without violating the sovereignty of Poland andRomania and, accordingly, risking not find itself at war with England andFrance.

In March1939 England invited the USSR to sign together with France and PolandUniversal Declaration on the interaction. In April 1939 Western Statesturned to the Soviet Union with a proposal to guarantee Poland and Romania.

In responseUSSR proposed pact of mutual assistance between England, France and the USSRwhile providing safeguards to the border with the Soviet Union states. Butnegotiations began on the subject, proved difficult because of mutual distrustbetween participants and parties unwillingness to compromise. Parties failed toovercome disagreements on the issue of "indirect aggression. England and France saw informulating Soviet threat to the sovereignty of its neighboring states, sothat any change in the border states of the Soviet Union could be qualifiedSoviet leadership as aggression there would be introduced, and the Soviets. ToBesides England considered these talks as a means of pressure on Germany and did not wantagreement.

Together withpolitical negotiations between Britain, France and the Soviet Union agreed to start negotiationsmilitary missions to enter into joint convention. They too wereineffective. 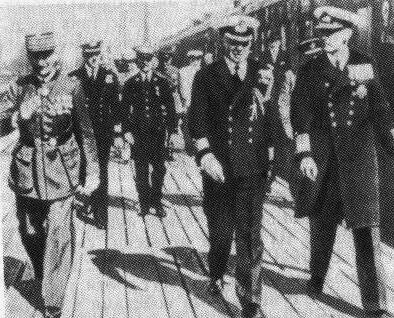 Formalobstacle to signing the convention was the unwillingness of Poland and Romaniaskip through their territories of the Soviet troops. True - SovietFind studied the issue of rapprochement with Germany.

In August1939 USSR was in the center of world politics. His commitmentdemanded as England with France and Germany. Before the Soviet leadershipwas the problem of choosing the final landmark on which depended the fate of the world.

AccordingStalin's alliance with Britain and France, at best, could bring tensionsrelations with Germany, and at worst, a war with Hezbollah. Union left the same with GermanySoviet Union would temporarily aside global conflict. One would expectcessation of hostilities with Japan on the River Halhin-Chief (there were from May toAugust 1939 in the MNR), which would affect only Germany,territorial acquisition at the expense of Poland, the Baltic States, Finland and Romania. 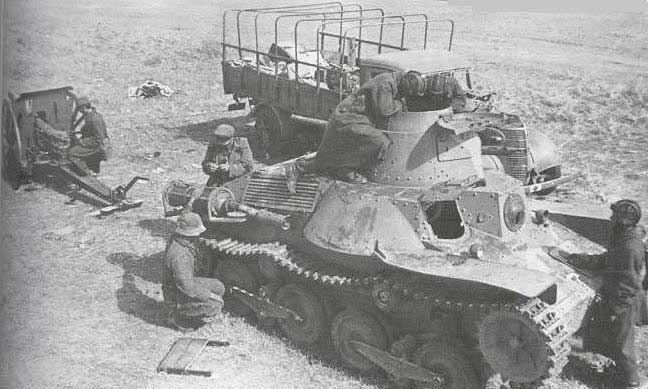 Germany wasagree to this if only to bring the Soviet Union out of the game and unleash its hands for aggressionagainst Poland, who was appointed on August 26 and then on September 1.

August 21Stalin received a telegram from Hitler, in which he stated that seeks tosigning non-aggression pact with the Soviet Union and is ready to sign any additionalagreement that applies to all controversial issues. Hitler asked for MinisterGerman Foreign Minister Ribbentrop to sign the relevant documents.

On the same dayStalin gave the order to suspend the negotiations with Britain and France, butobstavyvshy is as if the Soviet Union not guilty of disrupting them, and sent a telegram to Hitlerexpressing hopes for a significant turnaround in the Soviet-German relations. HeRibbentrop agreed to accept the deadline. Soviet intelligenceexactly knew about Hitler's plans for an attack on Poland. 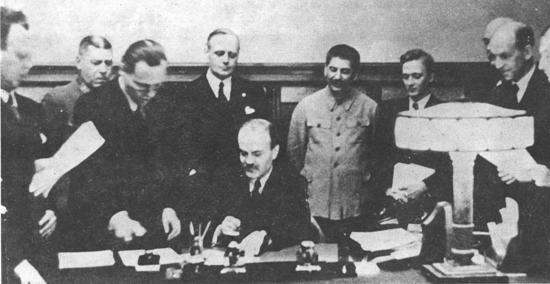 Aftershort talks Ribbentrop and Molotov signed in the Kremlin August 231939 non-aggression pact and a secret protocol to it.

InThe Parties agreed on the delimitation of "spheres of interest 'inEastern Europe. Germany recognized the Soviet sphere of interests of Finland, Latvia,Estonia and Becsarabiyu. Lithuania declared to the German sphere of interest. Protocolinvolved the distribution of Poland. Dividing line should be approximatelyNarew, Wisla, Xiang.

Contentdocuments signed in Moscow clearly revealed the nature of reorientation of foreignPolicy of the USSR. The essence of this rotation was not easy to changeforeign policy orientations and not only was limited to attempts to ensuresecurity through direct relations with Germany.

Secretprotocol testifiedThat USSR finally returned to the policy pursued by the Tsarist government: itsfeatures were secret diplomacy and territorial expansion. By signing the protocol,USSR was actually among the states - Arsonists War. 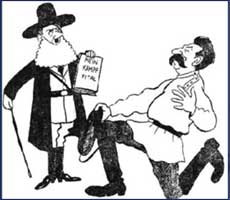 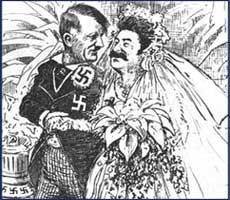 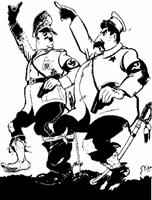 The immediateresult of the signing of these documents was that the German troops in the morning 1September 1939 attack against Poland. September 3 Britain and Francedeclared war on Germany. Outbreak of World War II.

Pact andadditional protocol and had an influence on Japanese-German relations. Japan regardedthese documents as a betrayal of Germany and after the last attack on the USSR refused hersupport. In addition, Japan has ceased its aggression against the MNR (armedconflict Japan and the USSR on the river Halhin-Chief).

Secret Additional Protocol to the non-aggression pact betweenGermany and the Union of Soviet Socialist Republics. August 231939

Signing non-aggression pact between Germany and the UnionSoviet Socialist Republics, the undersigned authorized both sidesdiscussed in a strictly confidential matter of division of spheresmutual interests in Eastern Europe.

This discussion led to the results follows:

1. In the case of territorial and political pereoblashtuvannyaareas that are part of the Baltic States (Finland, Estonia,Latvia, Lithuania), Lithuania's northern border is also below the area of interestGermany and the USSR. Thus the interests of Lithuania Vilensky region recognizedParties.

2. In the case of territorial and political pereoblashtuvannyaareas that are part of the Polish state, the border areas of interest in GermanyUSSR and stretches roughly along the line Narew year, Vistula and San. The question whethermutual interest in preserving desirable independent Polish state and  to be the borders of this state can befinally been settled only for the further political development. In eachIf the two governments will decide the issue in a friendly manner reciprocalconsent.

3. For south-east Europe from the Soviet sideemphasizes the interest of the USSR in Bessarabia. On the German side claimedits complete political disinterestedness in these areas.

4. This protocol shall be deposited by both parties in strictsecret.

According to the Commission for the Government of the USSRMolotov

For the Government of GermanyJ. Ribbentrop.

1. Whatwas caused by the appearance of this document?

2. Givemoral and historical evaluation of this protocol.

1. Whatchanges occurred in the politics of the USSR in 30 years?

2. Whatproblems caused disputes between the USSR and the West during thenegotiations?

3. Giveevaluation of the secret protocol to the non-aggression treaty between the USSR and Germany.

4. Asconsisted of Soviet-German relations between the two world wars?

6.       What is the interrelationCommunications between the Covenantnon-aggression pact between Germany and the Soviet Union and the conflict between the USSR and Japan onHalhin-Naked?

1934 - AdoptionUSSR to the League of Nations.

August 23, 1939- Signing PactMolotovaRibbentropa and secret protocol to it.