1. Decolonization and its contents causes

Background and reasonsdecolonization were: the defeat of Germany, Italy and Japan in the Second WorldWar; weakening control over their parent colonies (especially Franceand Holland), growing influence and potential colonies (especially Englishdominions), mass deployment of the national liberation movement, which inMost countries entered the armed character; great influence on the liberation ofhad a "cold war", which gave room to maneuver betweengreat powers contributed to the fall and colonialism.

An important factor was negativeattitude to public opinion in the colonial countries and metropolises of the worldpublic. 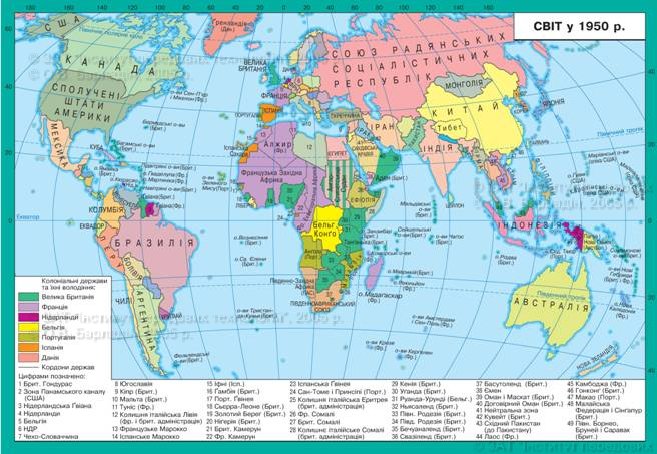 In the process of decolonizationcan distinguish several stages.

На first stage(1943-1956 biennium) the process of decolonization has covered mainly Asia and NorthAfrica. European countries have abandoned their mandate to managePalestine and Jordan (England), Lebanon and Syria (France). It was decidedthe fate of Italian and Japanese colonies and mandated territories. England providedindependence of India (1947), previously dividing it into two states -India and Pakistan, the island of Ceylon (Sri Lanka) and Burma. Declared its independenceIndonesia (17 August 1945), Vietnam (2 September 1945), theyasserted in the long armed struggle. In 1953 France recognizedindependence of Cambodia and Laos. In 1946 The United States independencePhilippines.

After the failure of the French-Englishaggression against Egypt in 1956 England recognized the full sovereignty of Sudan andFrance - independence of Tunisia and Morocco.

In the first stage colonizerstried to keep under his power much of possessions. Independencetook only those States which retain colonial state became impossible.However, after 1956 England and 1958 France followed by droppingtheir colonial possessions.

In the following years the processdecolonization of British possessions in East Africa. In 1961, independenceTanganyika gained in 1962 - Uganda, in 1963 - Kenyain 1964 - Zanzibar, Zambia, Malawi, in 1965 - the Gambia. Thisway to the mid 60's most of tropical Africa freed fromcolonial oppression.

This is decolonizationend. During fourth stage (80-90-years)achieved independence last pieces of colonial empires. Thus, in 1980was finally settled the problem of Southern Rhodesia (Zimbabwe), in1982 England gave independence of Belize in 1990 under pressureSouth Africa gave the world community independence of Namibia in 1997 Chinaresumed sovereignty over Hong Kong in 1999 - over Macao.

Thus, at the threshold of the XXI century.colonial empire gone. However, having achieved political independence,Youth State did not economically independent. Their main problem wasbackwardness with which most young countries can not cope. Warepidemics, famine, financial debts, ethnic and territorial problemshave become commonplace.

The collapse of the colonial system

Having political independence,new countries do not become economically independent. Empires and the U.S.continued to dictate the prices of raw materials and foodstuffs, industrial equipment.But the relationship was no longer the result of political pressure, and the resultretardation. Countries of Asia, Africa and Latin America remainedAgricultural and raw appendage, dependent on supply of machinery, equipment,inflow of foreign investment. This backwardness sealed dominationtraditional lifestyles, most of the illiteracy of the population,underdevelopment of communications and communications (infrastructure).

The problem deepened the backwardnessafter World War II due to increased population growth.Demographic explosion took place at a time when the transformation began onlytraditional socio-economic institutions in countries that have started to gainindependence. Agrarian overpopulation in some regions led to the presentdisaster. Use of all land, suitable for agriculturalproduction, deforestation, depletion of freshwater sources generatedthe problem of urbanization. From 1950 to 1980 350 million people from  Village residents have become towns in oselyayuchysmainly in areas surrounding large cities. Strong growthpopulation complicated the problem of underdevelopment, income per capitapopulation in some countries are lower compared to the colonial period.High birth rate has led to a rejuvenation of the population (children under 15 yearsconstitute half the population). To gain entry to the retardationneed to improve literacy population. A number of adolescents in such arequire large expenditures on education. The result is high rates of fertilityunemployment rate, which promotes the preservation of low wages and does not stimulateintroduction of new technologies, hinders technological progress.

Under the pressure of demographic explosion andgovernment policies designed to modernize society, the traditional waylife began to disintegrate. New relations coexisted with the old social,economic and political relations. The economy has multy,social structure - colorful, with most of the populationended up in transient marginal condition. This led tosocio-political instability. Revolution took place, statecoups, military revolts, civil wars, interstate, nationalconflicts that became characteristic of Asia, Africa, LatinAmerica.

Understanding the economic dependence ofthird world countries "initially was based on the notion that the worldeconomy is supported solely by their operation, which isby undercutting the prices of raw materials of the third world and overestimatingprices of finished products of developed countries. From this it appeared that achieveeconomic independence can result in replacing imported industrializationand exploitation of natural resources. Last manifested most fully inthe Organization of Petroleum Exporting Countries (OPEC). Established in 1960,it down on the world's oil exports, has started in 70 yearsraise prices on it, acting as an international cartel or syndicate. OPEC Actioncaused in the world energy crisis, increasing profits OPEC. Veryquickly this way to achieve economic independence give in ineffective.Occident had a modernization of production and cost reduction sideenergy. Also, increased energy production of the country, non-OPEC. As a result of the OPEC had cut oil production tosave costs, and this led to falling profits. Eventually the price of oil and gassignificantly declined. At the OPEC petrodollars received and did not create moderncompetitive industry, which would compensate falling revenues from exhaustionnatural resources. These countries have remained dependent on exports to theWest and Japan. Energy crisis of the strongest hit countriesdeveloping countries.

Importozaminnaindustrialization in many countries was impossible because of lack ofnecessary natural and human resources, small domestic consumption:40% of the world have area less than 100 thousand square meters. km with a population of 3million. In addition, this course means continuing backwardness intechnologies. Industrialization, which was held without opportunities, ledto financial debt and its burden on the shoulders perekladavsya population.

Gradually, in a "Thirdworld "convinced of the need to review strategy. Scopenew strategy is not to counter the global economy andadapt to its needs. The first is aware of Latin Americancountry.

In 1974 group of countriesThird World has initiated a special sessionUN General Assembly on economic issues, where the declaration was adopteda new global economic order (NSEP). Its essence isreallocation of financial and technological resources to countriesdeveloping countries. The basis for such claims was the argument about responsibilitydeveloped countries. Occident disagreed with the allegations but expressedreadiness to support modernization.

At the time of deployment discussionsposition of the third world deteriorated. Trying to solveproblems with foreign loans led to increased debt"Third World" (1980 debt was 400 billion dollars, and1988 - 1120 billion).

It remained one output: the forceddevelop export capacity and promote imported foreign capital. Thesemeasures boosted the new structures. They supported the IMF and the IBRD.Preferential loans were issued to these institutions on condition of marketReform:

The revolution in economic policycountries of the Third World led to a drop of almost simultaneouslyrevolutions in Eastern Europe prosotsialistychnyh regimes and terminationsocialist experiments in third world countries.

Thus, to overcome backwardnessturned to Asia and Africa not only an economic problem. This processwas, in fact, the interaction of civilizations. It was associated with retardationdomination of traditional lifestyles centenary. They are meant to overcome the modernizationsociety. Modernization proved nothing more than an attempt to introduceelements of an alien civilization. Such civilizational interaction incredible boreconflicts that so many "third world" when behind the facadeparliamentary institutions appeared rodopleminni relations, when suddenlyappear "Islamic republic" that fixing up theirconstitutions disempowerment of women and corporal punishment, etc. This attemptaccelerate modernization, traditional society to impose alien to himvalues sometimes caused a sharp conservative reaction. An example of this -Islamic revolution in Iran.

In solving all problems of the country"Third World" were each their own way. They had different startingposition and not the same pace of development. As a result of differentiation between countries"Toho-thirds of the world" is growing. Among them the most attractive lookGulf Arab states, but, paradoxically, the wealthturned conservation in these countries patriarchal clan system andunlimited monarchies.

The most dynamic in the social,economically and politically evolved new industrial state Kong(Now part of China), Singapore, Taiwan, South Korea, then to themjoined by Indonesia, Malaysia, the Philippines. Using foreign capital andtechnology, significant human resources in the field, they managed to create a well-developedmanufacturing industry, which works mainly for export and to compete successfullyWestern markets.

Modernization of the "third world"

After World War II greatlyaccelerated the process of decolonization, which led to the liquidation of colonial empiresand creation of new independent states. Before the newly independent states emergedthe main problem - the modernization. Despite all the difficultiesmodernization of the Third World was leaps and bounds. Themdomestic industry to create and implement new technologies and"Green Revolution" lifted the threat of mass starvation. They have achievedrecognition of their problems as global problems. Their voice is clearly heard at allinternational forums. Has changed their social structure. Much of the workingpopulation is employed, is a local entrepreneurial capital,middle class gone omnipotence of large landowners and tribalnobility. Fits and starts, but the increased standard of living. Gradually formedsocio-economic conditions for the rooting of democratic institutions. This processcoincided with the democratic transformations in Eastern Europe and thus morehalf the world population was living in conditions of political freedom. Such dynamicchange - another phenomenon of the twentieth century. 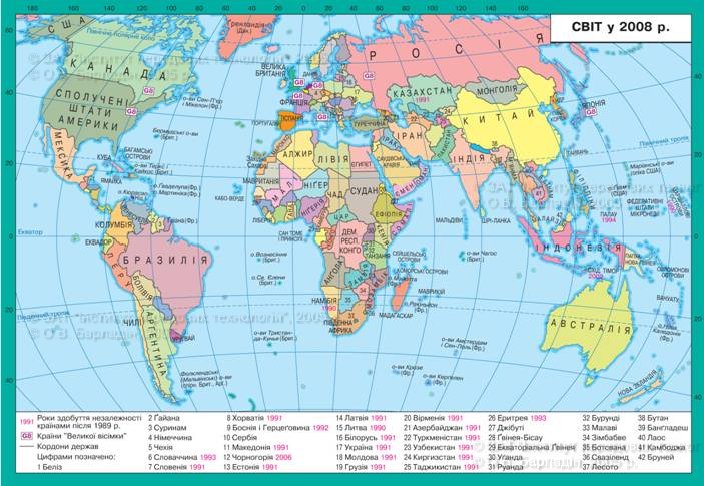 1.    Specify the main reasons the process of decolonization thatunderway in the world after World War II?

2.    As the process of decolonization took place? What are its results?

3.    What problems faced young country on the wayindependent development?

5.    Identify the advantages and disadvantages of each model?