Assyria, as already mentioned, called the mountain partsecond anniversary in the north. Its center was the city AssyrianWhich was located in the middle flow of the Tigris River. In the XVIII century.BC Assyria conquered the ancient king Hammurabi. The weakening and decline The ancientStates enabled the Assyrians in the XIV century. BC startbuilding their own country. She appeared in continuous wars with neighbors.

Forming strong physically violent and alwaysready for a fierce fight for their survival, people were concerned thatAssyria attacks took first conquerors who came in second anniversary of the event. Assyrianshealed the fame of one of the fiercest nations past. They not only killedcaptured, the defenders of cities, but were taken from conquered countries, theleadership, officials and tradesmen. In so doing make it impossible for a long time resistancesubdued. But the cruelty of the Assyrians, who showed their strength, wasboth their weakness - could never subjugated to acceptdomination of invaders.

2. The economic life of society and Assyrians

As in The ancientkingdom, the main producers in Assyria were agricultural communities. they belongedmost of the land in the state. The owners were other kings, their surroundings andrich. Communities consisted of several generations of close relatives. Commune landaffected boundary, but inside was divided into small plots, each of whichtilled one family. In the peasants, there were royal and templeeconomy. Typically, slaves cultivated the land or impoverished peasants. As inother ancient states, slaves in Assyria became debtors in war.

Classes agriculture has been quite successful. Assyriansused a plow in the river valleys cultivated wheat and barley. Onsouthern slopes of the mountains laid the vineyards and orchards. They also planted a largecattle, sheep and goats, liked to hunt.

Reached a high level of craft. It is believed thatAssyrians just learned the first to the second anniversary of molten iron. Famous for theirtheir skill gunmakers. Metal, agricultural products accounted forbulk goods that are traded Assyrians. In addition, theyresold goods from other countries zbuvaly looted in wars. Trade andusury were the main sources through which the army keptAssyria.

Above Assyrian society was composed of richnobles, priests, merchants and officials. At its head stood the king thatconcentrated in the hands unlimited power. He chastised and spared rozporyadzhavsyastate property led military campaigns.

After a successful military campaign against the king had to make the godsreport on the march and hand over some prey in favor of the house. Ritualduty of the king was hunting lions. During hunting lions released fromcells in the fenced park. The king had them potsilyty boom or even killritual knife. Next to the king were always experienced archers whosaw to it that the king did not happen. Park surroundedspysonostsi that hindered many viewers. Such scenes depicted on manyAssyrian relief.

Assyria first ozbroyila his army iron weapons thatgave her an advantage over other armies. Assyrian warrior had gabledbronze helmet, a long spear with an iron blade, large panels, upholstered bronze,protective metal plates on the legs. From strikes enemy saved his leatherjacket, which were fixed convex metal plate.

Storm for enemies has also cavalry Assyrian, forwhich were taken some breeds of horses. Scientists believe that the Assyrians first time inhistory in the IX century. BC created the corps. TerribleAssyrians have been fighting weapon chariot. During the battle in a chariot were threeWarriors: driver, archer and zbroyenosets who concealed their shield. Warriors skillfullyused siege towers and battering rams to assault cities.

Almost 270 years Assyrian did not know defeat.Well-organized and armed, she conquered vast territories thatAssyria turned into a powerful state. The rulers of such powerful countries asBabylon, Syria, Urartu, Phoenicia, and later even the kings of Egypt paid hertribute.

The narration Assyrian king on a hike

During my hike 22 kings, slaves, subject tome on the beach, the sea and on land, they brought me his great gifts andkissed my feet ... Haste to help kings and governors, who in Egypttribes who served me were slaves, I quickly went and came to Karbanitu. TarkKing of Egypt and Ethiopia, having heard the approximationmy campaign, took his fighters into battle, to battle and sichu. With Ayashiura, And Bella Acquired, Largegods, my lords, that are on my side in the battle among a wide field of Idefeated his soldiers. 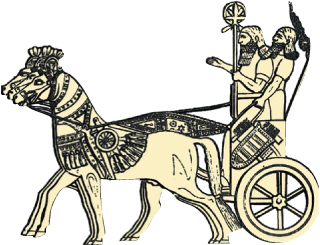 What really do youopinion was crucial to victory Assyrian king in Egypt?

A well-known conqueror king of Assyria TihlatpalasarI (1115-1077 BC). During his rule Assyrian statestretched from the Mediterranean coast to the upper Tiger. At this timestrengthened the state economically. Successfully developed agriculture, which allowedto increase grain reserves in comparison with previous periods.Acquired trade. The main trade artery was the Tigris River. Onits banks in the capital city of Assyria Assyrian merchant ships to be builtmany marinas. Later Assyrians controlled all trade routes FrontAsia, excluding those held by Palestine.

Tihlatpalasar І was not onlyprominent military leader, a builder, but also a diplomat. Him for the successfulmaking union with longtime enemy - Egypt - Pharaoh gave livecrocodile that was considered a symbol of good intentions. The only Assyrian king whocould read and write, was Ashurbanipal.

The period of greatest prosperity began in the reign of Assyria Tihlatpalasara III (745-727 years BC). It is the first time in history created Dvorichchiaregular army, which was held by government funds. Army had a clear organizationby division into groups of infantry, cavalry and detachments of military chariots. Withnayboyezdatnishu on the second anniversary of the army, TihlatpalasarIIISyria conquered Babylon kingdom, which at that time was broken, and distributedpower of the Assyrians in the territory from Egypt to the Persian Gulf and the Caucasus andcreated the first in history empire.

TihlatpalasarIII, to hold vast areas in humility, limited powerrulers conquered his cities and states. It also won pereselyavpeople on a desert land on the borders of Assyria. It had to separate them from theirland and thereby weaken their struggle for freedom, and ensurestate workforce. Cities that resisted the invaders with it zrivnyuvavland. But the Assyrians did not know then that the same and wait for their excellentAssyrian and the city NinevehWhen through hundred plus years of subduedpeople stand up. In 721, the BC became king of Assyria Sargon II (721-705 years BC).

During his administration built a new capital - the city Dur-Sharrukin, Which means "city Sargon. Resettlement to new capital, he notedsuppression of one of the many revolts in Babylon - a city that has repeatedlytried to break free from the power of the conquerors. Shortly Sargondied during the military campaign.

5. Palaces of Assyria and their fate

Assyrian kings palace was built on artificiallycreated by Hill. He was surrounded by strong fortress walls with jagged towers.Near the entrance on both sides were enormous, hewn from stone statues of good spirits- Winged bulls with human heads, with black beards and coloredwings. The walls of rooms were decorated with reliefs, carved on stoneflags and painted in five colors. In relief sculpture depictingAssyrian army raids, the seizure and destruction of enemy cities, mercilessdeath and capture of prisoners.

Often portrayed in relief scenes from the life itselfking. Behold, the king hunt lions. Furious rush by beasts or hunterI fall from wounds. Another relief shows how Assyrian king Ашshurbanipal feasting with his beloved wife in the garden. It lies on the bed and keepsin his hand a glass of wine. Blackbeard and the king rozchesana Zavitaja. In muscularthe hands of massive bracelets and rings. Beside him sits his wife with a glasswine in hand. Nearby are the servants of opahalamy an officer and who are willingfulfill any desire of its ruler. Not only the sounds of harps and tambourines upsetking. He gets pleasure from a bloody sight: a tree hanging severedhead of one of his enemies.

Ashurbanipal was the most educated of the Assyrian kings (though it did not bother him to showcruelty). At his behest, the palace were brought not only jewelry, but also books.It was assembled a large library, which preserved ancient BabylonMyths, legends, prayers, works of wise men on the movement of celestial bodies and that theypeople preached. King Palace was burned during the attack on enemies NinevehAnd the library survived. Clay "book"not burn, and become stronger after firing. Archaeologists have unearthed the ruinspalace Ashurbanipal and found this library. Theycollected fragments of tablets and joined them. It was restored Myth of the DelugeLegend of Gilgamesh and many othercuneiform "books" Ancient second anniversary.

Like any state, based on the abuse ofthe conquered nations, Assyria was doomed to brief existence. ConstantWar and the struggle for power at the top of society, thousands of rebellionterritories conquered by Assyria weakened. It is difficult to resistaggressive neighbors, she sought allies in the fight against them. Thisally, for it was Egypt. But Egypt does not support saved the once mightystate.

In 614, the BC Babylonians began the attack onAssyria, their allies - Medes - completely destroyed the ancient capital of AssyriaAssur. In 612, the BC have a combined force of Babylonians and Medes weresiege to one of the largest Assyrian cities - Nineveh.

The siege of the city lasted three months. Ninevehshared the fate of black carbon as the Assyrian. The city was captured, looted.akin to the earth. Population Nineveh almostwas exterminated. Those who survived became slaves. The last Assyrian king Shin-layer ishkun (Sarak) Not known inthe hands of enemies. He set fire to his palace and burned it. At the palace burnedAssyrians and the last hope for the revival of the state. Remains of Assyriantogether with the Egyptians gave his last fight at 605 was BC near Karhemysha. Once upon a powerful state, quickly disintegrated, and itsland were brought under control as governor of Babylon. Conqueror destroyedAssyrian nobility, and those who survived went planet. Modern scientistsargue that the world now live about 2 million Assyrians in Syria, Iran,Turkey, Azerbaijan, U.S. and even in Ukraine.

1. FromRelated names are the kings of the formation and flourishing Assyrian state?

2. Namecauses the collapse of Assyria.

5. As youthink so Assyrians managed for centuries to lead the victoriousWar?